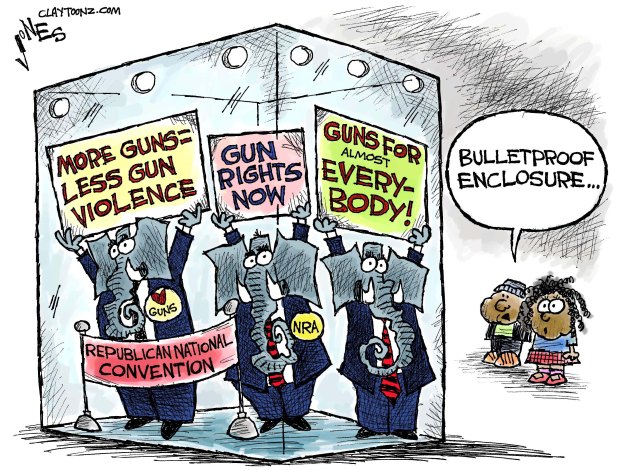 There is a petition to allow guns at the Republican National Convention and so far it’s gained 25,000 votes.

The convention will be held at Quicken Loans Arena in Cleveland. The owners of the arena cite private property in not allowing guns at the convention. I don’t blame them. Would you really wanna be in a giant convention with a bunch of armed and angry Republicans? Hell, I don’t even want to share a bathroom with them.

The funny thing is the mystery over who’s behind the petition. Is it genuine gun nuts, er…gun rights enthusiasts or is it actually gun control advocates trolling the convention? Republicans are very easy to troll.

It’s ironic the Republicans would pick the city where a child, Tamir Rice, was gunned down by police for playing with a toy gun. The GOP is full of gun lovers who believe more guns prevent gun violence. They’re also blind supporters of the police whenever one of them decides to shoot an unarmed black male, or child.

It should also be interesting since Donald Trump has threatened a riot if he isn’t granted the nomination. Hey, let’s arm them while we’re at it. Let’s see what happens.

It’s also funny Republicans are all about everyone having guns and being able to take them into any coffee shop they choose, but don’t want them at their convention, gun shows (irony!), and from yesterday’s events, the United States Capitol.

You never know when some angry white Christian will show up armed and trying to shoot people. Maybe we should start patrolling white Christian neighborhoods before they become radicalized.