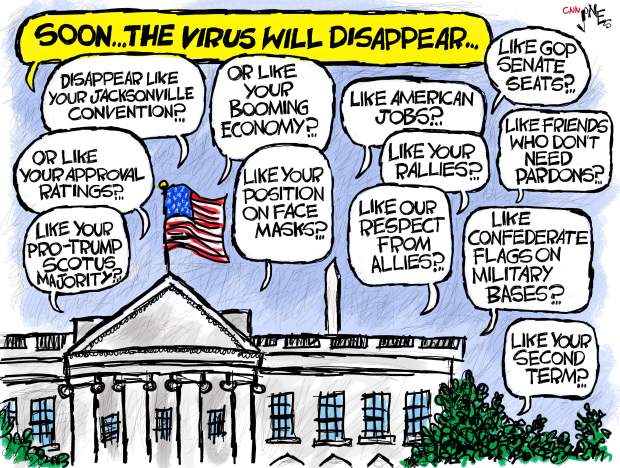 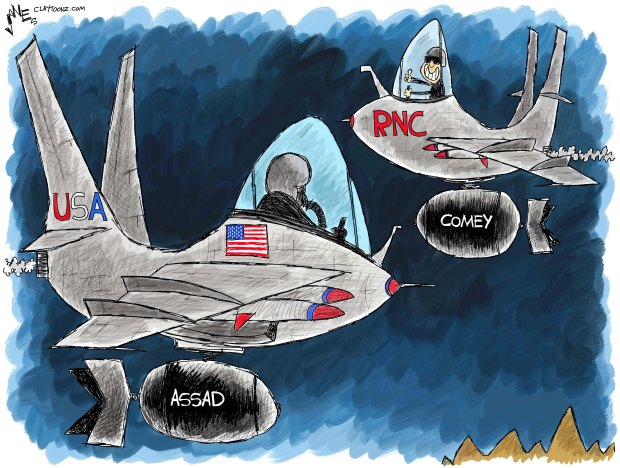 The FBI raided Trump’s inept attorney’s office, home, and hotel this week, greatly upsetting the president. Michael Cohen probably knows and has records, along with audio recordings, of every dirty and illegal thing Trump has ever done in his adult life. The walls are closing in on the Trump presidency.

And that dossier the Republicans have claimed is a work of a fiction funded by the Democrats and that the Justice Department used to improperly acquire FISA warrants to survey a Russian mole in Trump’s campaign? A part of it may have been confirmed this week. The dossier has information on Cohen meeting with Russians in Prague, Czech Republic. Cohen denied this and posted a photo of his passport to prove it months ago on social media. As it turns out, you don’t need a passport to travel from Germany to the Czech Republic.

Congressional Republicans, who infamously used the dossier to discredit investigators, shut down their own investigation a few weeks ago, claiming there wasn’t enough evidence of collusion with Russia, so they may as well stop looking. Now, they will have to find some new talking points. For now, the Republican National Committee is preoccupied with attacking former FBI Director James Comey.

The RNC is putting their full weight into an attack on Comey, a fellow Republican who served the George W. Bush administration. While the rest of the nation sees the desperation of the Trump administration, the GOP is going all in by putting coward before nation.

Trump, who warned Syria, Russia, and Iran earlier in the week that the missiles were coming (he literally said “the missiles are coming”), said to Syria’s allies, “What kind of a nation wants to be associated with the mass murder of innocent men, women and children?”

That’s funny because for the past two years I’ve been wondering what sort of people want to be associated with a massive corrupt dumbass.

I’m kinda disgusted with myself. I feel icky for drawing Larry The Cable Guy, a testament to America’s rejection of intellectualism and a tribute to lowbrow humor and stupidity. I feel all sorts of nasty because I googled quotes from Larry The Cable Guy as I was going to use one for this cartoon and then I decided not to as too many focus on farting. Finally, after reading all the Larry poop jokes I must have lost a few brain cells as I was on the verge of texting copy editor friends of mine with “is it ‘Get ‘Er Done'” or ‘Get-R-Done?'”. All that’s missing is some Luke Bryan music playing in the background (Luke Bryan’s a country singer, right? I can’t Google anymore stupid tonight).

I need a shower but I probably don’t need one as much as Speaker of the House Paul Ryan’s going to after speaking at the Republican National Convention next month in Cleveland.

Before Ryan endorsed Trump he said if Trump didn’t want him at the convention he was cool with it. It probably went down like “really! I’m cool with it. I’ll be fine. I’ll find something else to do. It’s all good. Just go on without me. Seriously.” But then the idiot went and endorsed Trump the same day he described some of Trump’s words as “racist,” and got himself back into that stinky convention commitment. Try worming your way out of it now, Mr. Speaker.

Trump has been reaching a lot of voice mails lately. He’s calling people to speak at the convention and a lot of them aren’t answering, or they’re changing their numbers, burning their phones, going off the grid, going MIA. Seriously, has anyone seen Arnold Schwarzenegger lately? He’ll be back.

Chris Christie will attend but there’s probably catering (that’s not entirely a fat joke as I myself have attended some messed-up stuff for a buffet. I have probably attended 17 Rotarian meetings where the speaker was Trent Lott every. single. time. I’m a newspaper person and we’ll go anywhere for a free sandwich). Newt Gingrich will be there but he’s always selling a book or something (this year it’s a pop-up and the reviews have been amazing. I made that up…about the pop-up and the reviews). Usually congressmen are clawing over each other for a speaking spot. This year they’re running away as if Trump had a leprosy Chlamydia combo going. It’s Chlamydprosy. You don’t want that. It’s hard enough getting people near you as a Republican.

Trump has also stated that if people don’t endorse him, specifically the former GOP candidates like Ted Cruz and John Kasich, that they shouldn’t be allowed to speak at the convention. That might bother Ted Cruz because he’s an attention whore, but John Kasich seems fine with it. He doesn’t need to make the long hour-long slog from Columbus to Cleveland in July. He’s probably already sent the “you do you” text.

Did you think it got weird in 2012 at the McCain/Palin convention when Clint Eastwood talked to a chair? Wait until Ted Nugent reads a love poem to an Uzi.

Traditionally every Republican party leader attends the convention and speaks. Trey Gowdy’s going to the beach and Mark Sanford is walking on a trail. Mitt Romney’s staying home to count his car elevators. John McCain can’t think of a worse place to be, and he was a POW. If there’s a tarnished former president like Richard Nixon, they kinda shove him aside and don’t speak of him. But traditionally former presidents show up. Neither George H.W. or George W. Bush aren’t attending. This is the first time not going to a party is George W. Bush’s choice.

This pretty much leaves speaking at the convention to the likes of Mike Ditka, Bobby Knight, Dana White (he runs that UFC stuff), Tom Brady (he’s a maybe), Brian France (who runs NASCAR which is kind of a sport), and Mike Tyson who’s not even capable of speaking. We’ll probably also be treated to appearances by Sarah Palin and Chachi.

Have you ever seen the warm up acts for a Trump speech? Yesterday in Maine the warm up guy was doing a racist imitation of Native Americans while calling Elizabeth Warren “Pocahontas.” Look forward to three full days of that.

Did anyone invite Carrot Top? He was a last-second addition to this cartoon. I know he’s working Vegas but he’s probably available for $300 and a bus ticket. Someone should call him and “get ‘er done.”

There is a petition to allow guns at the Republican National Convention and so far it’s gained 25,000 votes.

The convention will be held at Quicken Loans Arena in Cleveland. The owners of the arena cite private property in not allowing guns at the convention. I don’t blame them. Would you really wanna be in a giant convention with a bunch of armed and angry Republicans? Hell, I don’t even want to share a bathroom with them.

The funny thing is the mystery over who’s behind the petition. Is it genuine gun nuts, er…gun rights enthusiasts or is it actually gun control advocates trolling the convention? Republicans are very easy to troll.

It’s ironic the Republicans would pick the city where a child, Tamir Rice, was gunned down by police for playing with a toy gun. The GOP is full of gun lovers who believe more guns prevent gun violence. They’re also blind supporters of the police whenever one of them decides to shoot an unarmed black male, or child.

It should also be interesting since Donald Trump has threatened a riot if he isn’t granted the nomination. Hey, let’s arm them while we’re at it. Let’s see what happens.

It’s also funny Republicans are all about everyone having guns and being able to take them into any coffee shop they choose, but don’t want them at their convention, gun shows (irony!), and from yesterday’s events, the United States Capitol.

You never know when some angry white Christian will show up armed and trying to shoot people. Maybe we should start patrolling white Christian neighborhoods before they become radicalized. 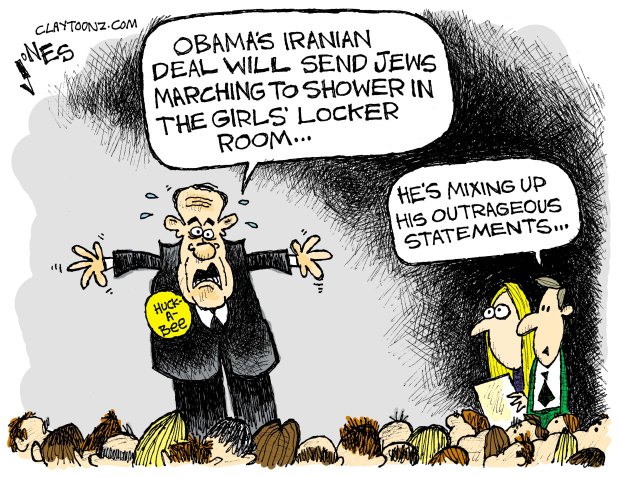 My friend and fellow cartoonist Mike Luckovich of the Atlanta Journal-Constitution drew a great cartoon on GOP presidential candidate Mike Huckabee’s “oven door remark.” He drew Huckabee making the statement on Donald Trump’s The Apprentice. It was the kind of idea I wish I had thought of except there’s one problem.

Huckabee is not an apprentice when it comes to stupid statements. He made a comment recently about transgenders saying he wishes he could have used that excuse in high school to shower with girls. Hang in there, Huckster. Maybe someday a girl will want to shower with you.

He once compared his weight loss to being in a concentration camp.

Continuing on the Holocaust theme he once compared it to abortion.

He once asked if Mormons believe Jesus and the Devil are brothers.

He congratulated Canada on their National Igloo (Canada doesn’t have a national igloo).

Then there was the time he compared being gay to bestiality and pedophilia and said “I think the radical view is to say that we’re going to change the definition of marriage so that it can mean two men, two women, a man and three women, a man and a child, a man and animal.”

Did you hear about the time he claimed that the Newtown shooting was because “we systematically removed God from our schools.”

When it comes to crazy, stupid and just odd statements, Mike Huckabee is no apprentice.