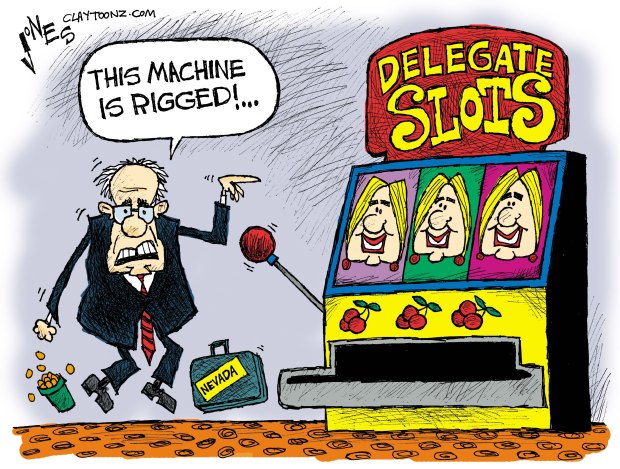 When I draw a cartoon on Hillary Clinton her supporters are upset with me. I’m sure Bernie Sander’s people won’t like what I’m saying here.

People vote with their hearts for Bernie. People vote with their heads for Hillary. Bernie inspires passion in people while Hillary doesn’t, but more Democratic voters are viewing her as a more logical choice.  Sanders still hasn’t proven he can win a primary with a diverse electorate and the contests coming up are not going to get any easier for him. After losing in Nevada, I don’t see the delegate math working out for him.

I like Bernie’s passion and his ideas. I don’t think free college and healthcare is any sillier than free war and corporate welfare. I’m sure he can stomp Trump, Rubio, and Cruz in a debate. But I have more faith in Hillary Clinton dealing with a Republican congress. She has proven she’s tougher than any other politician running, or anyone in Congress. I have faith in that.

Fun factoid: The carpet in my office is actually from a Las Vegas casino.