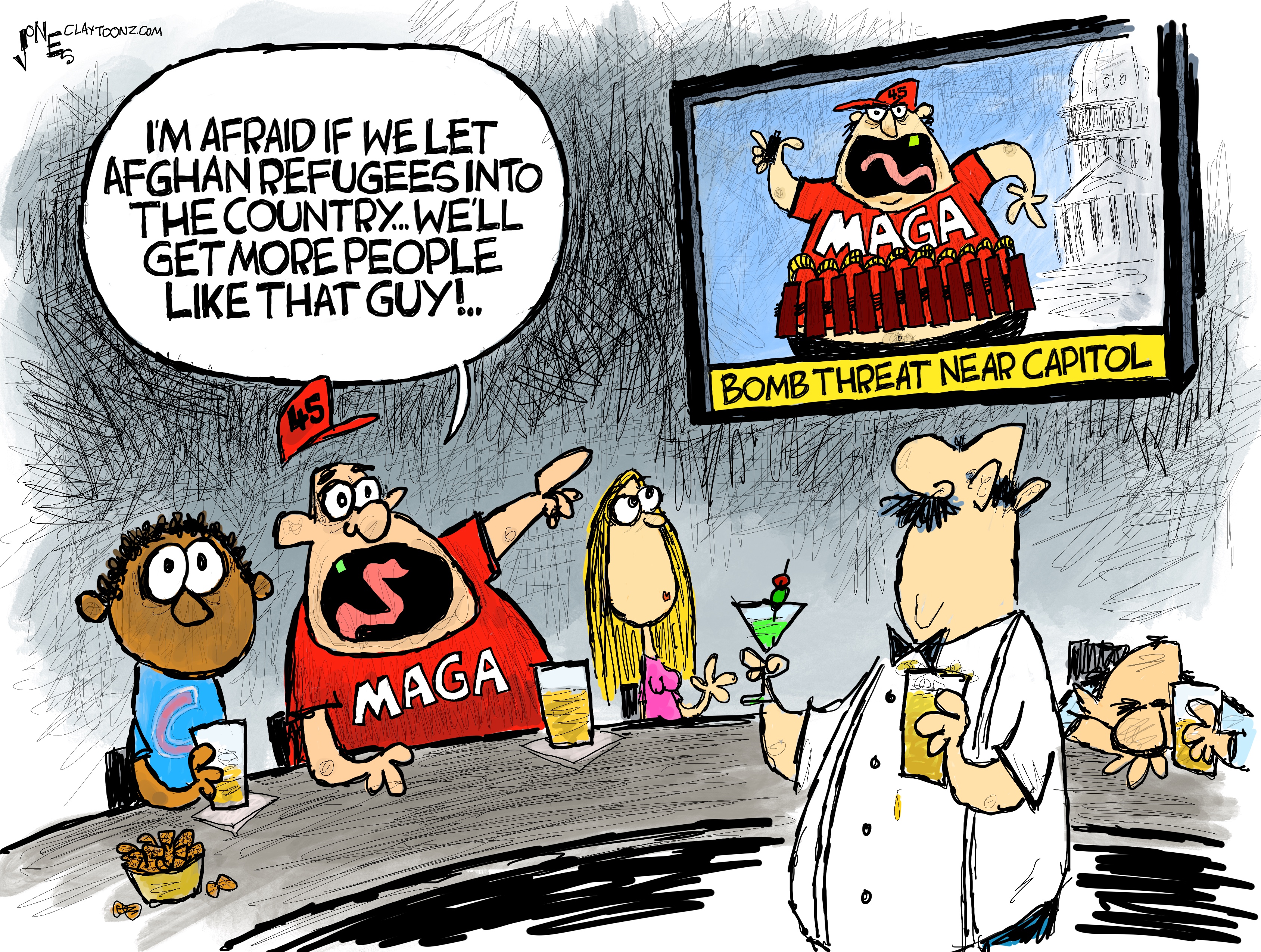 Over at Fox News, the morons are at it again and they’re having a difficult time concealing their xenophobia.

Of course, it all starts with Tucker. Tucker Carlson claims if we let in Afghan refugees, it will be an invasion. Keep in mind, these refugees are being hunted down by the Taliban for working with America against terrorists. Their lives are in danger because they fought in the war on terror. Tucker and other Republicans believe these people are dangerous and not the likes of the Trump terrorists who stormed into the United States Capitol complex to overturn an election.

These people defend and cover up for real terrorists while fear mongering over hypothetical ones.

Tucker said, “If history is any guide, and it’s always a guide, we will see many refugees from Afghanistan resettle in our country in coming months, probably in your neighbourhood.” That’d probably be a good thing and much more preferable than having the Qanon Shaman move in next door…or Tucker.

Tucker believes in the Great Replacement Theory that Democrats are changing the demographics of the country through immigration to replace white people like Tucker. He believes this is part of that strategy. He also claimed that after immigrants arrive here, they start hating America. He says Representative Ilhan Omar “got worse” after she arrived to America and started hating this country. Dude, she got here when she was about 12 years old. Just because your maturity hasn’t advanced beyond that age, don’t believe others are as simplistic as you are. Trust me on this, we all get worse after 12.

Former White House goon, Stephen Miller, is now gooning on Fox News…which is something he did while we were paying him to goon for the government. Earlier this week, he brought his racism, xenophobia, and all-around ickiness to Laura Ingraham, who has spent years training to suppress her gag reflex to be around creepers like Miller.

Stephen Miller said, “The United States of America never, ever made a promise—written or unwritten—to the people of Afghanistan that if after 20 years they were unable to secure their own country that we would take them to ours.” Mostly, Miller is afraid that after they get here, they’ll laugh at spray-on hair.

Afghanistan veteran and former CIA analyst, Matt Zeller, said, “Stephen Miller never wore a uniform a day in his life. He’s a privileged little brat! He ought to be held for war crimes.”

Zeller put a lot of blame on Trump for the refugee crisis saying, “The reason all these people are stuck in Afghanistan right now is because the visa program created to get them here, it was purposely shut down by the Trump administration for the last four years.”

He also said, “The Trump administration came in and purposely destroyed it. The reason why all of these Afghans were stuck in Afghanistan for as long as they were in the first place is because those people made sure they couldn’t get out. As I said before, they’re as complicit as the Taliban are in these people’s deaths.”

I’m not worried about refugees who fought against the Taliban being a threat to our nation. I’m more worried about the MAGA goon who parked his truck on the sidewalk in front of the Library of Congress yesterday claiming he had a bomb.

The Capitol Police, a police force gaining experience with terrorism on a daily basis, negotiated with the man for hours before he surrendered. He didn’t have a bomb in his truck, but he did have bomb making material, including a propane tank.

The guy is a wannabe terrorist who is a Trump supporter. He livestreamed on Facebook that he wants President Biden and Democrats to resign. He’s really stressed out about the situation in Afghanistan. Maybe he’s afraid some Afghan refugee will become a terrorist and drive his pickup truck onto the sidewalk in front of the Library of Congress and make bomb threats.

The worst people we could bring to this nation would be people like Trump supporters. We don’t need more people like the pickup truck Trump terrorist (say that fast three times), Tucker Carlson, or Stephen Miller. I would rather replace each of them with an Afghan refugee who fought against terrorism.

Maybe we can make MAGAts refugees and export them to Afghanistan. We can do a swap. We get the Afghans who fought against the Taliban, and they get the MAGAts who staged a terrorist attack against the United States.

Trumpers and the Taliban have a lot in common.

Notes on my book, Tales From The Trumpster Fire: here are SIX copies of my book in stock, which go for $45.00 each, signed. Also, I have copies of my first book from 1997, Knee-Deep in Mississippi available for $20.00.