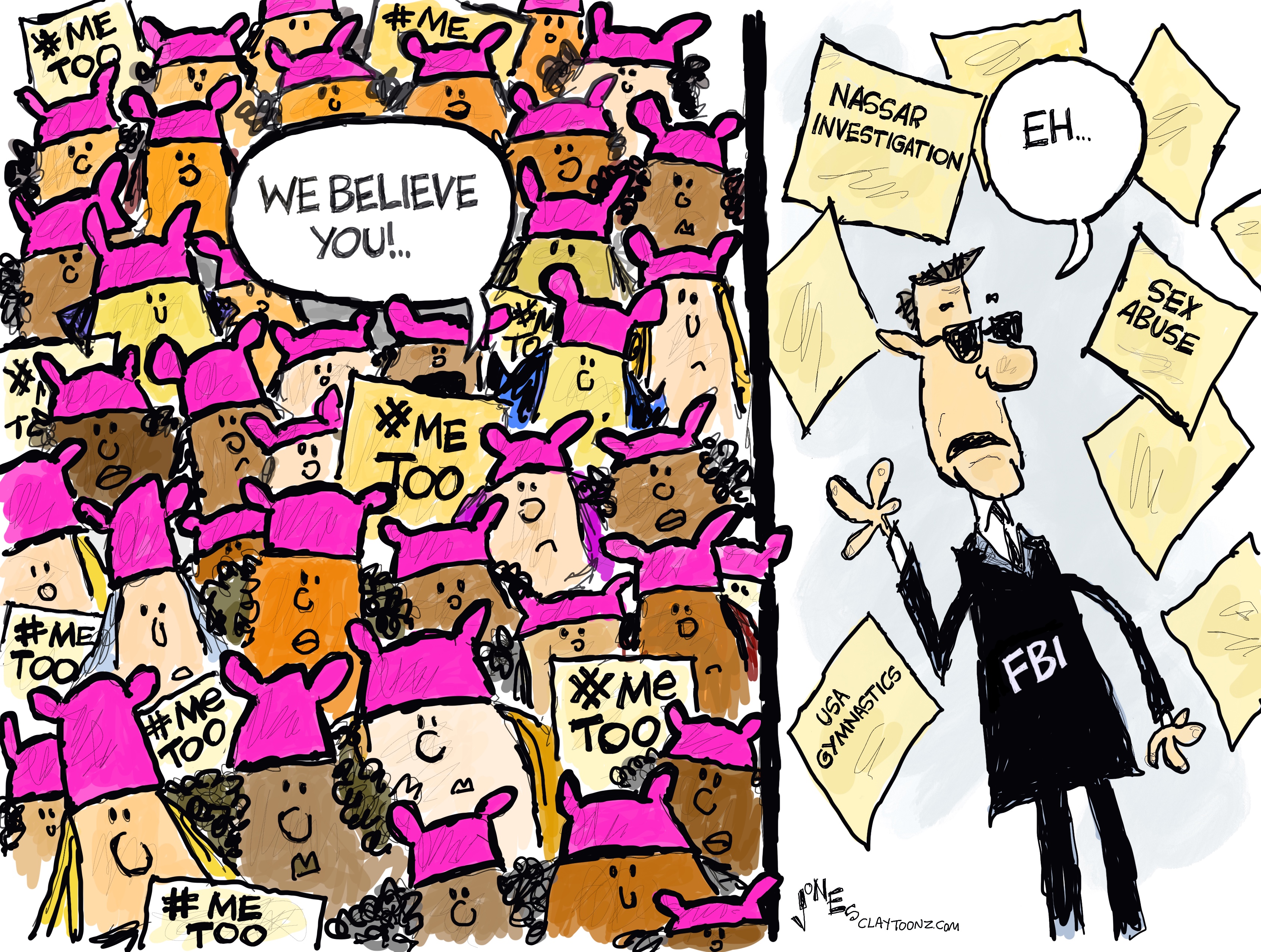 Rachael Denhollander, a lawyer and former gymnast, was the first to publicly accuse Nassar of sexual assault. She assumed Nassar was abusing other women because he had worked with the national team for four years before abusing her, and she knew how abusers worked. She said, “When I came forward, I fully expected multiple levels of botched investigations and cover-ups because that’s what survivors are up against.” She was right.

There is a new report by the Justice Department’s Inspector General that says for a year after being alerted to Nassar’s abuse, the FBI ignored it.

Denhollander said, “This is what survivors are up against. And they constantly get asked the question, ‘Why don’t survivors report?’ This is why.”

The report, citing civil court documents, said 70 or more young athletes had been sexually abused by Nassar between July 2015, when U.S.A. Gymnastics first reported allegations against Nassar to the FBI’s Indianapolis field office, and August 2016, when the Michigan State University Police Department received a separate complaint. One of the victims during the time the FBI sat on the report was eight years old. This makes the Federal Bureau of Investigations complicit with Nassar’s sexual assaults.

The IG report says officials in the Indianapolis field office failed to respond to the allegations “with the utmost seriousness and urgency that they deserved and required” and the investigation did not proceed until after a September 2016 report by The Indianapolis Star detailed Nassar’s abuse. So, what was going on for a year? Why did the FBI only start taking it seriously after the public was informed? If a newspaper had never investigated the accusations of sexual assault at USA Gymnastics and Michigan State University, would the FBI had ever investigated it?

W. Jay Abbott, the special agent in charge of the Indianapolis field office, was inquiring about job openings at…wait for it…the U.S. Olympic Committee, even while questioning them about the case, he was asking about jobs with the Olympic organization. He even applied for one. USA Gymnastics was complicit and covering up the sexual assaults, and the guy in charge of the investigation was asking them for a job.

Nassar spoke with the president and chief executive of USA Gymnastics about potential job opportunities with U.S.O.C, even as the two discussed the allegations against Nassar. Abbott later applied for a job at the U.S.O.C., but twice lied to the inspector general about seeking that job.

Since he lied and violated FBI policy by applying for jobs with people he was questioning during an investigation, surely Abbott was charged, right? Wrong. Once again, men are protecting men who were protecting men.

Abbott’s lawyer issued a statement saying, “Mr. Abbott thanks the law enforcement officers and prosecutors who brought Larry Nassar to justice. Mr. Abbott hopes the courageous victims of Nassar’s horrible crime find peace.” What bullshit. If Abbott hadn’t been busted covering up the assaults and sitting on the investigation, then Nassar would never have been prosecuted. Nobody would have found any peace. Abbott thanking law enforcement and prosecutors for sending Nassar to prison is like Dr. Frankenstein thanking the pitchfork and torch-wielding angry villagers for killing his monster. It’d be like Donald Trump thanking human rights activists for reuniting families he separated at the border.

W. Jay Abbott is complicit with the rape of women and girls by Larry Nassar. While he was sitting on a case and asking about jobs so he could take them while receiving his FBI pension, Nassar was continuing to rape and assault, possibly over 100 girls and women, including an eight-year-old. Abbott should be charged and have his pension stripped from him. Maybe that will help the victims find the peace Abbott is hoping for them. Abbott couldn’t be more complicit if was physically holding the women down while Nassar sexually assaulted them.

The FBI sat on the Nassar case and they’re doing it again by refusing to charge and prosecute Abbott. There will be a Senate investigation over this and one of the questions will be, “Why isn’t anyone at the FBI being prosecuted for this?”

The reason there’s a need for the #MeToo movement, “We Believe You,” and the Pussyhat Project is because so many people refuse to even listen to victims, less enough to believe them. And it’s because of men like Jay Abbott in powerful positions protecting rapists like Lawrence Nassar in powerful positions that women don’t report assaults more often.