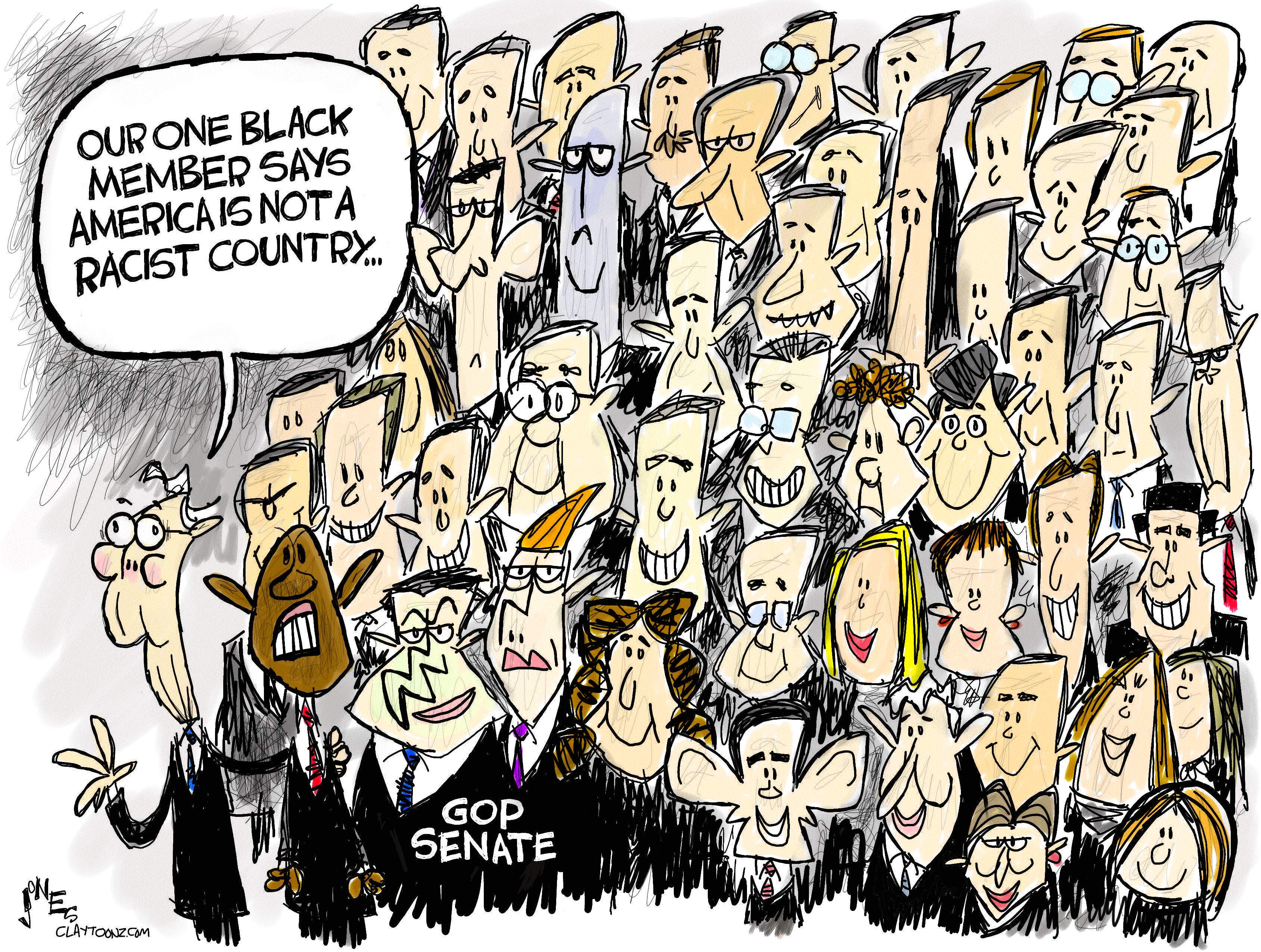 Republican Senator Tim Scott was chosen to deliver his party’s response to President Joe Biden’s address to Congress. In his speech, Scott said, “Hear me clearly: America is not a racist country. It’s backwards to fight discrimination with different types of discrimination. And it’s wrong to try to use our painful past to dishonestly shut down debates in the present.”

Republicans, who struggle with race, rallied around this message in hopes that we can finally stop talking about race so they’ll be left alone to create racist legislation.

If America is not a racist country, at the very least, the Republican Party is a racist party. Proof of this is they chose their one black senator to deliver the message that they’re not racist. It’s not like they said, “Hmmmm….which one of our many black members should we choose to deliver this address?” And to be a successful black Republican, you have to echo racist Republican talking points. And for those few black Americans who are Republicans, some have found it to be very profitable to be the GOP’s black friend. Isn’t that right, Candace Owens?

Candace Owens used to be a liberal until she cashed in her principles to be the Republican black friend. Republicans will pay a black person to say they’re not racist. Ever see a Trump rally on TV? Ever notice there’s always a black person in the audience behind Trump? That’s the Republican black friend of the day and they’re using him to show the party’s diversity, even though there are no black Republicans in the crowd standing in front of Trump. But at least they got the one black guy on TV.

But you gotta hand it to Tim Scott. He’s chosen to be the Republican Senate’s token and he’s nailing it. He’s nailing it because just like all his white counterparts, his position is based on bullshit and ignores reality.

The problem for Republicans in shedding their image as a racist party is that they’re racist. I’m not saying every Republican is a racist, but every racist is a Republican. They draft policies racists love. They are on the same side as neo-Nazis and Klansmen. During the Capitol riot in support of Donald Trump, the terrorists were white nationalists. There were Proud Boys, Oath Keepers, and One Percenters. If you want someone to think you’re a racist, put on a MAGA cap. And if you think Black Lives Matter is a Marxist or terrorist group, then you’re probably a racist.

President Joe Biden and Vice-President Kamala Harris agree with Senator Scott that our nation is not racist. All three of them are wrong.

When one of our two major parties is racist, we are a racist nation. This nation was built on racism. Our Constitution was written with exceptions made for racists. Our electoral system is racist. We fought a war over racism and today, half the nation can’t admit it was fought over racism. During the last election, over 70 million Americans voted for racist Donald Trump. And yes, Donald Trump is a racist. If you voted for Donald Trump, you are very comfortable with racism.

As for the black-friend defense, keep in mind that Hitler, perhaps the vilest bigot in world history, had a pact with Japan. Another major bigot from American history, Strom Thurmond, who ran for president as the racist candidate, loved to have sex with black women and even had a black daughter (at least one we know of). The black-friend defense doesn’t work anymore, but if you’re a racist, you probably still think it does. You also probably start a lot of sentences with, “I’m not a racist, but…”

We are a racist nation. If we weren’t, then it wouldn’t have been so shocking that a jury convicted a white cop of murdering a black man.

America, you have a race problem. The proof of that is each time a Republican says “we don’t have a race problem.” Also, further proof is how many people voted for and still support Donald Trump. As the token black guy in a teen horror film might say, “that shit is whack, yo.”

Creative note: I had more trouble than usual with this cartoon because of the challenge of drawing exactly 50 senators (yes, there are 50…or there should be), and making several of them caricatures…which got complicated because my stylus stopped working. This has been going on for a while. Every couple of days, it stops working. But, rebooting my device seems to be the cure for a while. The only problem is, if I’m in the middle of coloring, rebooting the program creates another layer and that’s a new complication to blend, which involves techie geek stuff you don’t wanna hear. I thought I had fixed the problem but as I learned this morning, I didn’t. Then, instead of waiting two more days, the stylus stopped working again. When you have to stop your project repeatedly to deal with a tech issue, it really kills momentum and discourages creativity.

Other creative thing: Republicans elect a lot of people with freaky faces. What’s up with that? I had a conversation yesterday with my colleague Pat Bagley and I asked if his Ted Cruz caricature is uglier than my Rudy Giuliani caricature.