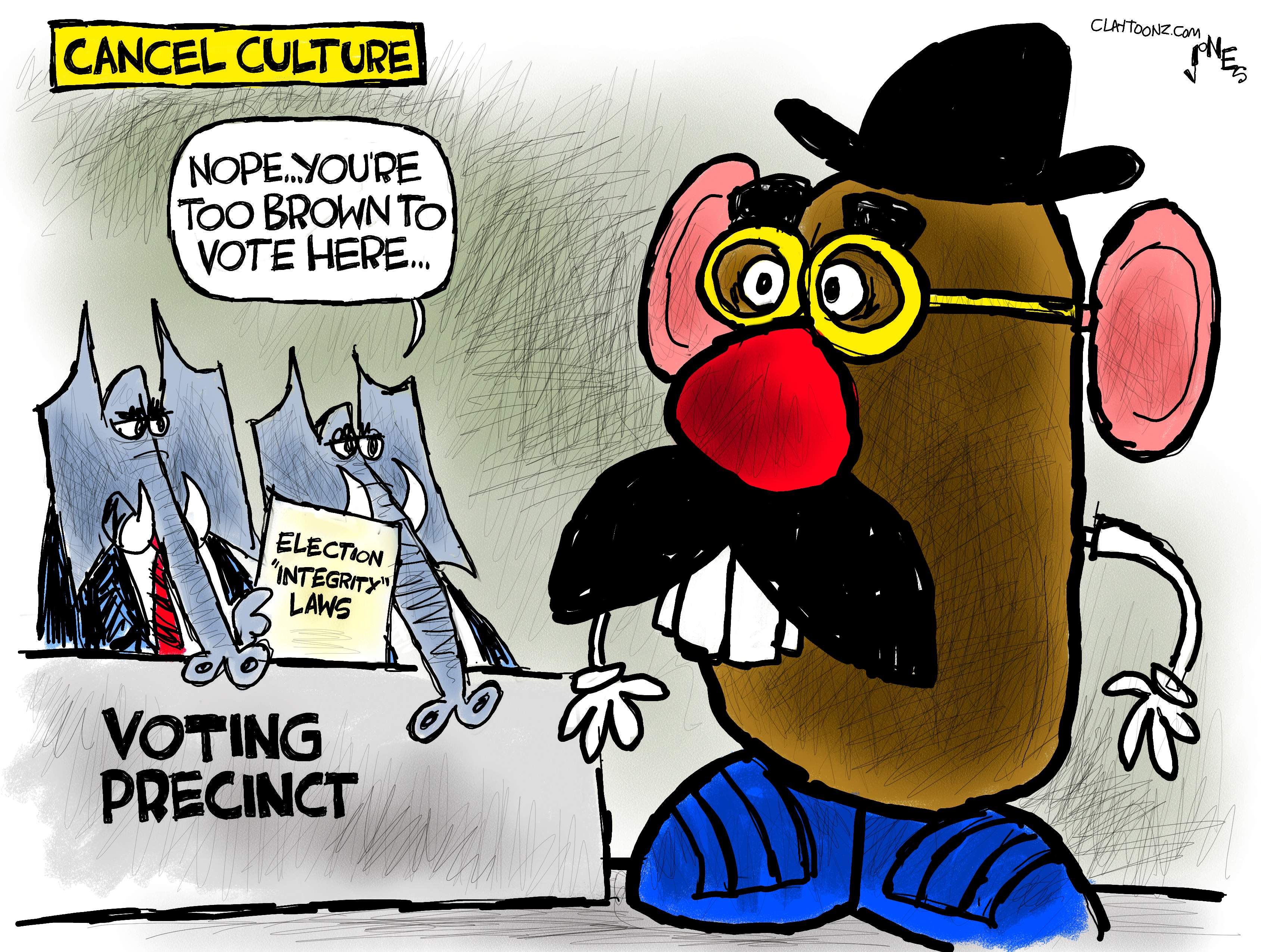 Yesterday, one of my cartooning colleagues sent out a call to cartoonists asking if any of us had a Mr. Potato Head and if so, could he borrow it. I do have a Mr. Potato Head and he’s been with me for at least a couple of decades. I don’t remember where or when I bought him. He may have been a gift. I don’t remember. I’m old. But he’s overlooking my desk right now. And no, you can’t borrow him. He’s not going anywhere. I don’t know what my friend’s plans are for my Mr. Potato Head but I’ll be damned if I let him defile him or risk losing him in the mail. I like my Mr. Potato Head so much that after I moved into this apartment and couldn’t find his hat and mustache, I ordered replacements. Did you know you could do that? I didn’t but there are fuckers on Ebay selling Mr. Potato Head mustaches. That’s a thing.

To my friend, you could just purchase one on Amazon and it’d be at your house probably faster than I could send you mine. You can still purchase a Mr. Potato Head because despite all the Republican outrage, he has NOT been canceled. His big blue shoes are still kicking. Hasbro, the company that makes the toy, is still selling toy potatoes with the Mr. and Mrs. designations. They’re just also creating some playsets that de-emphasize the Mr. and Mrs. Also, it’s a toy of a potato.

This “cancel culture” bullshit has to stop. Most of the time, it doesn’t really exist. It’s like assholes complaining about political correctness. Basically, all political correctness is about is that you stop being an asshole. That’s really it. Now when Republicans scream about “cancel culture,” they’re making themselves out to be the victims when they’re really the perpetrators.

They yell racist shit and spread conspiracy theories, so when they are removed from a social media platform, they scream they’re being victimized. It’s like when someone claims rights for LGBTQ violates their religious freedom to be a bigot.

When you spread conspiracy theories and herd white nationalist terrorists to attack the government, it’s NOT cancel culture when you’re removed from Twitter.

When the company that owns the Dr. Seuss franchise decides to stop selling a few titles because of racist images, that’s not cancel culture. It’s not even a ban. That’s the company making up their own mind, without pressure or threats, to stop selling poisonous and hateful shit to children.

When a warning label is placed on The Muppets, that’s still not cancel culture. Which side were all you jackasses on when Tipper Gore wanted to put labels on Prince’s music? Right now, you’re all freaking out about the WAP song. And how did I reference the WAP song two days in a row?

Cancel culture is when you and your troglodyte buddies canceled Colin Kaepernick because you didn’t like his message. You hated his silent protest so much, you didn’t want him to have a job.

The former cartoonist of The Pittsburgh Post-Gazette, Rob Rogers, was “canceled” by his bosses because he refused to stop drawing cartoons criticizing Donald Trump. They fired him. Now, his replacement, a Trump-supporter, is drawing cartoons decrying cancel culture. You can’t make this shit up.

When you and your fellow Karens, who are all white teachers at a private Christian school, lose your jobs for posting a picture on social media holding letters that spell out “Coons,” that’s not cancel culture. That’s you being racist despite your defense you were only trying to spell “raccoons” in a human Scrabble contest and you never knew that word was racist. You’re teachers and you didn’t know “coons” was racist and the five of you together can’t spell “raccoons”? Yesterday, they tried to spell “Schwarzenegger.”

What’s just as racist, even if they don’t use any of the words, is trying to cancel the rights of minority voters. Republicans are racist? That’s not a surprise and you also shouldn’t be surprised that they care a lot more about Muppets, Potato Heads, and other inanimate objects than they care about voting rights.

Republicans in multiple states, especially in states President Joe Biden won that are controlled by Republican legislatures, are trying to disenfranchise millions of voters, specifically black and brown voters. You know, the wrong kind of voters.

Republicans are basing this on “election integrity” which means they want to remove all integrity from elections. Republicans do not want every eligible voter to vote. They’re trying to cut down on the number of ballot drop boxes, limit mail-in voting, hours at the precincts, and make it more difficult for minority voters in rural communities to get government ID cards.

They argue the laws have to be changed because stupid people think there was fraud. But then again, these are the same motherfuckers who want to build a wall in the desert where nobody crosses the border.

Never mind there wasn’t any actual fraud, but hey…if white people feel weird about it, then we need to make it harder for black people to vote. One lawyer arguing Arizona’s case before the Supreme Court actually admitted they needed the laws to change or else they wouldn’t win any elections in the future.

I suck at basketball so if I play Michael Jordon one-on-one, I need to be spotted 50 points and have the game limited to two minutes. Fuck getting better at basketball. Let’s just change the rules so I can win.

States like Arizona and Georgia are going blue. Their demographics are changing and there are more urban voters which typically goes to the Democrats. These states’ populations are increasing with people who are college educated and who don’t vote based on conspiracy theories and they typically don’t vote for Nazi lovers…so yeah, they don’t vote for Republicans. The best way for Republicans to win with these new voters is to not let them vote.

As it turns out, legislators who operate on conspiracy theories can’t win votes from intelligent people. We should not change laws that will disenfranchise millions of voters because you don’t like the outcome of the last election. You lost. Why don’t you try to win the next one by convincing more people to vote for you instead of trying to prevent them from voting?

Maybe instead of disenfranchising millions of minority voters, the Republican Party could try to create policies that appeal to more than just Nazis. Nah, stopping black people from voting is a lot easier.

What a bunch of Mr. Fuck Heads.