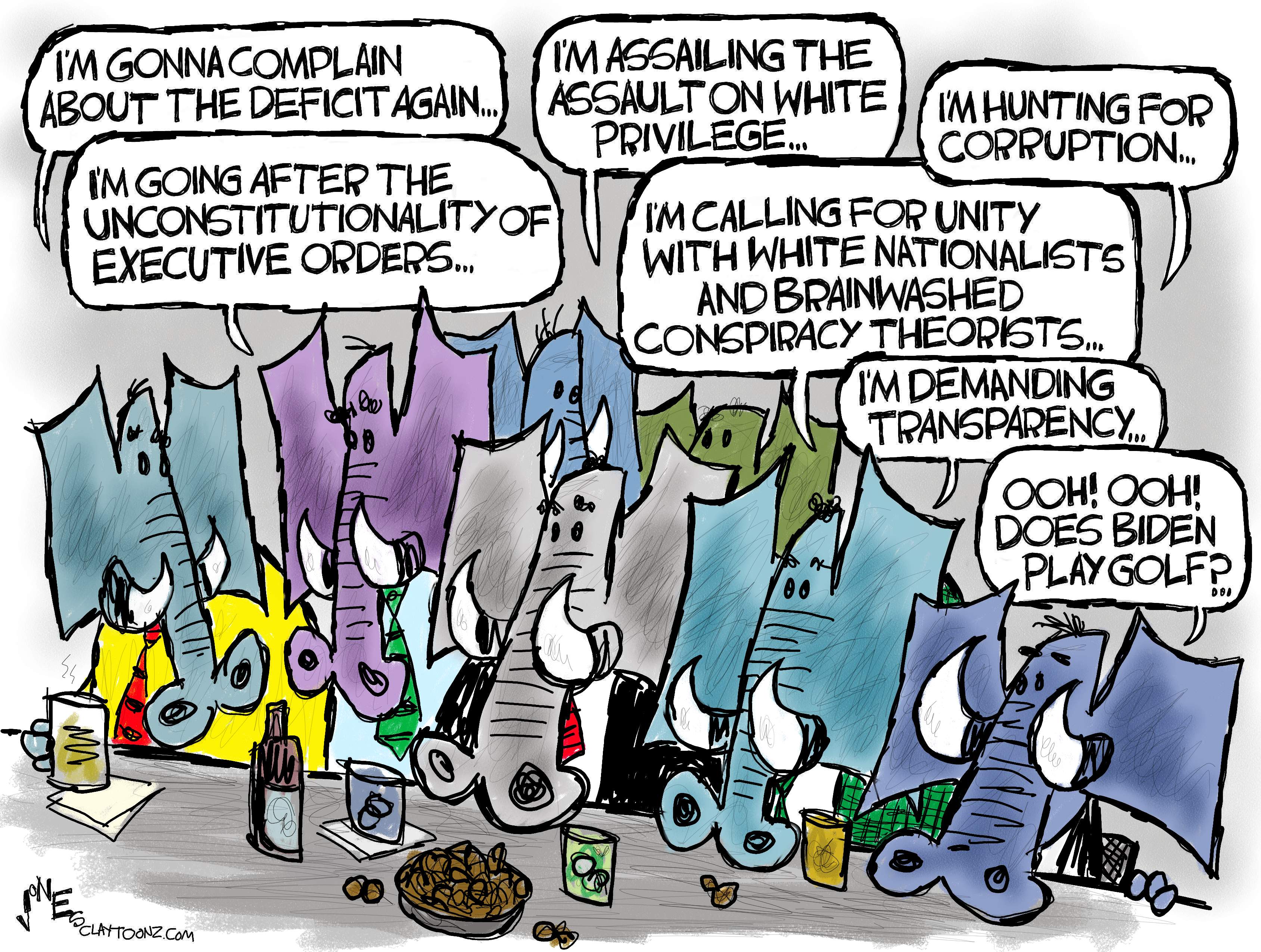 The Republican Party sold its soul for Donald Trump. Positions? What positions? In service to their orange messiah, the GOP vanquished all their previous positions. The party is more of a cult than a party. Now, they’re trying to figure out if they’re a party in pursuit of positions again or if they still need to bow down before the Trump base.

The one positive for the GOP is that Donald Trump is off Twitter. Can you imagine the tweet storm we would have had the pleasure of experiencing if he was still on the platform? I feel sorry for the poor caddy he’s probably barking at right about now over President Joe Biden erasing his “legacy” of hate and stupidity.

If Donald Trump forms his own party with the hypocritical name, “Patriot Party,” that doesn’t allow the GOP to be a party of issues again. They will be reminded of all they gave away to Trump and his base. Just because they don’t like you anymore doesn’t mean you can pretend you always cared about deficits or family values.

But the Republican will now try to criticize stuff they allowed Donald Trump to get away with. It’s like when President Obama was playing golf during his two terms (because unlike Trump, he got two). The Republicans were aghast at how much he played. Even Donald Trump attacked President Obama over his golfing. As soon as the Trump regime began, Trump started playing golf and the GOP forgot their indignation over a president (SIC!) playing golf. Donald Trump spent more time on the golf course, his own by the way, than any president ever ever ever ever ever. You know, I’m starting to think that maybe it wasn’t the golf.

During his presidency, he collected money from foreign dignitaries staying at his hotels and resorts. Republicans spent money at his resorts and hotels to curry his favor. Attorney General and apparently party animal William Barr rented out Trump’s ballroom to throw a party during a pandemic. One cabinet official even tried to purchase a mattress from the Washington Trump Hotel. Trump tried to get an international summit at one of his shitty golf resorts. An ambassador tried to get a major golf tournament at one of his Scottish resorts. This is major corruption.

Donald Trump treated the presidency like an ATM machine.

Then, he tried to steal the election by extorting a foreign leader to go after his political opponent. Before that, he asked Russia to help him…and they did. This was corruption.

Now, when the GOP talks about corruption, don’t let the hypocrites get away with it.

The Republicans make a big deal about government spending. They’re very loud on the issue…but only when a Democrat has the White House. They were silent during the Bush years…and then the next set of Bush years. Bill Clinton took away their right to control the issue because he left a surplus. The GOP couldn’t have a good bitch fest over the deficit for 28 years, from Reagan in 1980 to 2009, when President Obama took over. Immediately, they went after President Obama for the deficit George W. Bush created. After President Obama left the White House, after winning election TWICE, the Republicans gave credit for his booming economy to Donald Trump, who was very successful at inheriting stuff other people built and at being an old white rich dude.

So now when they start talking about government spending and deficits again, don’t let them get away with it.

The Trump regime established the 1776 Commission, which is a whitewashing of American history that caters to the white privilege, OK, racist perspective. Now, they’re upset Joe Biden is getting rid of it, or at least off the White House website. During his inaugural address, Biden criticized white supremacy. Senator Rand Paul went off, claiming that Biden called Republicans white supremacists. He did not but we can all thank Senator Paul for outing himself…not that we didn’t already know it.

Now, they’re calling for unity with brainwashed conspiracy theorists cultists and white nationalists. After four years of Trump racism and after staging a bloody failed coup attempt against our government, I don’t want to hear these assholes complaining that their white privilege is being denied.

Last week, people who consider describe themselves as Antifa attacked the Democratic Party headquarters in Portland, Oregon. They set a few dumpsters on fire. The Republicans tried to equate it to the white nationalists Trump mob attack on the Capitol, while leaving out the part about the target being the DNC. The most amusing thing out of this was that after four years, the GOP was finally critical of dumpster fires. Damn, I should have my own talk show.

Also, when these Republican goons demand transparency from the Biden administration, ask them why Donald Trump made a secret run to Walter Reed BEFORE he caught the coronavirus?

Remind Republicans they’re hypocrites. They sacrificed a lot for Donald Trump and maybe the biggest thing they gave away was their right to gripe about anything. They spent four years ignoring an assault on our nation so I don’t want to hear them pretend they care now.

Joe Biden can get caught with 20 prostitutes and as long as he doesn’t tell over 30,000 lies, should be free from Republican criticism.