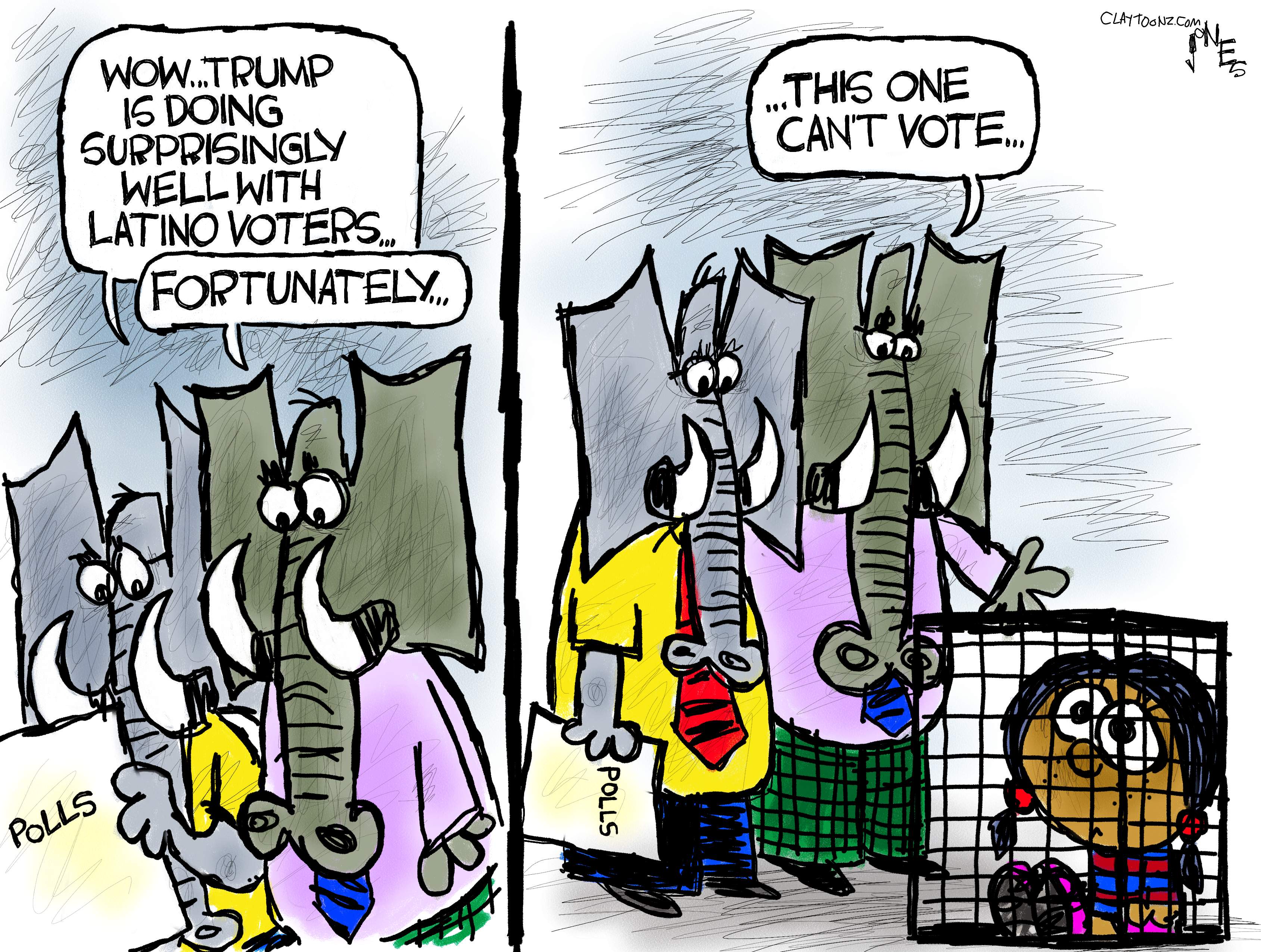 Donald Trump is doing better with Hispanic and Latino voters than he did four years ago. What? After four years of “shithole” countries, building a wall, ICE raids, ripping families apart, forcing children to defend themselves in immigration court, and putting babies in cages, his approval is up with Latinos?

Joe Biden is leading with the Hispanic/Latino vote by 20 percent, but that’s nationally. In Florida, Donald Trump leads Biden among Hispanics/Latinos by two to four points, depending on the poll. In Miami-Dade County, where Donald Trump lost the Hispanic/Latino vote by 30 percent in 2016, he’s leading now by a point. In 2016, Hillary Clinton won two thirds of that vote in Florida.

In Florida and Arizona, Hispanic/Latino voters make up 20 percent of the population. This is an extremely important vote to win.

So, why is racist “A Mexican judge isn’t fit to judge me” Donald Trump doing so well with this demographic? It’s kinda like the evangelical vote in a way where you have supposed Christians supporting an accused rapist and friend of pedophiles. Or, it’s like Trump still doing well with military families even after saying a POW is only a hero because he got captured and “I like people who weren’t captured.” It doesn’t make any sense, does it?

Where Donald Trump is doing well is with Hispanics and Latinos who are evangelical and a generation removed from immigration. Basically, just like most Trump voters, it’s all about them and they don’t care about other people. He’s also doing well with his anti-socialism message with those of Cuban and Venezuelan descent. The bullshit fear thing is working on a large segment of them.

This could be just in time for Donald Trump as his support among older white Americans, suburbanites, and the military is thinning.

You can argue these Hispanic and Latino Trump supporters are voting against their best interest and they’re morons, But the way I see it, all Trump supporters are voting against their best interests and are morons. Donald Trump is destroying this nation and that affects all of us, white, black, brown, etc. The only people who should be excited about Donald Trump are billionaire assholes, anti-abortion zealots, Russians, and his stupid kids who will become even richer billionaire assholes.

Joe Biden has focused more on the black vote, but now he’s directing more attention to the Hispanic/Latino vote because if he doesn’t, it could cost him the presidency. While he leads Trump nationally by 20 points, Clinton was up by 38. And while Biden is leading Trump in Texas by ten, Clinton beat him by 27. Joe has some work to do. Winning Florida or Arizona could deliver Biden the presidency. If he actually gets both, I predict he wins the White House.

Donald Trump doing well with Hispanics is as messed up and bizarre as him being nominated for the Nobel Peace Prize by a Norwegian. What? That just happened? Shit.

But, that Norwegian is a white supremacist who believes hijabs are the equivalent of KKK robes. Hey, Latino Americans…what’s your excuse?