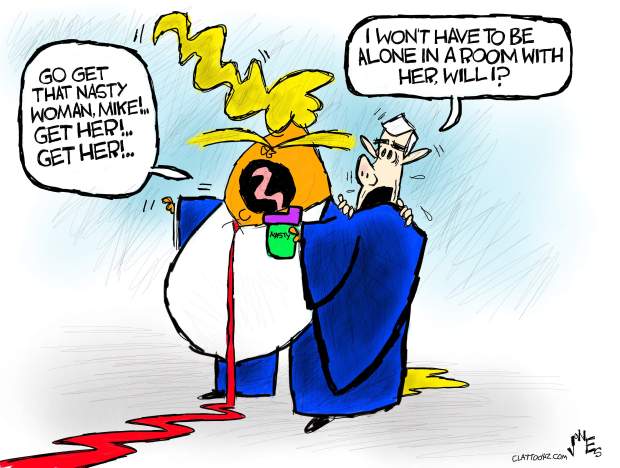 As Joe Biden so famously once said, “This is a big fucking deal.”

Kamala is not the first woman to be on a major party ticket. There was Geraldine Ferraro, a congresswoman picked by Walter Mondale in 1984. That was a ticket that had zero chance of winning and ultimately, Ronald Reagan was reelected in a massive landslide.

Then, there was Sarah Palin who was John McCain’s pick in 2008. Oh, god…I gotta stop now.

And on top of the ticket was Hilary Clinton in 2016 who actually won the election but lost. Isn’t that representative of America? The overly-qualified woman, perhaps the most qualified presidential candidate in American history, beats the rich white guy but the prize is awarded to him anyway who goes on to take credit for the successes of the black guy.

All evening, I heard on CNN how Kamala was not the safe pick. Then, I got a special update email from the Larry Sabato’s Center for Politics at UVA which describes her as a safe pick.

When you look at Kamala Harris’ resume, she looks like the safe pick. She was Attorney General for California and has been a Senator for less than four years. But during her time in the Senate, she’s proven herself to be a forceful prosecutor and has made Trump appointees like Brett Kavanaugh, William Barr, and Jeff Sessions squirm in their seats. Right now, she’s probably making Mike Pence, a man who refuses to even be alone in a room with a woman who’s not his wife, squirm.

But when you look at Kamala she’s not a safe pick. Why? Because she’s a woman and she’s black. Just being a woman presents obstacles. Last week, Harris had to take on accusations of being ambitious. Seriously. Four years ago, a huge portion of the nation rejected Hillary Clinton for the same thing and polls actually rated Donald Trump more honest than Clinton. That’s what 30 years of gaslighting will get you. And have you ever heard a man have to defend himself for being ambitious?

Then you add Harris’ race to the equation. Months ago, Donald Trump Jr. accused her of not being black. Seriously. If Joe Biden had any chance of picking up any of the white male racist vote, he blew it yesterday. Good riddance.

Joe Biden promised he would pick a woman. With the summer of Black Lives Matter marches and Donald Trump’s increased racism, many believed that woman needed to be black. Tucker Carlson actually claimed picking a person solely on their race and gender was illegal. Harris was not picked SOLELY on her race and gender, but that didn’t seem to be a problem for people like Tucker for the first 45 president’s veeps.

After the pick was announced, Liberals went crazy on social media crying about how Harris wasn’t progressive enough. Conservatives claimed she was too liberal.

I don’t think Republicans have found their ammo yet for Harris. While many said it Harris being Biden’s choice was easily predictable, Republicans apparently wasted time in not preparing. Maybe they were too busy not preparing for the coronavirus pandemic.

I saw one conservative leave multiple posts on Facebook about her sexual past, accusing her of sleeping her way to the top. How sexist. Donald Trump could only repeat over and over about how “nasty” she was, which is his favorite adjective for women who hold him accountable or refuse to sell him Greenland.

Donald Trump also went on about how she was “nasty” to Brett Kavanaugh and to Joe Biden during the debate. He wondered out loud how Biden could pick someone who was so mean to him. I’m sure it’s nothing like Ted Cruz crawling up Trump’s ass after he insulted his wife.

I like the pick. Kamala Harris was my first choice during the primaries and she was my favorite to be Biden’s veep though I would have been fine with Susan Rice. I think Harris is a better pick though. She’s been vetted. She’s tough. She’s a badass.

Somewhere right now, Mike Pence is wetting himself. Fortunately for Trump, he doesn’t have to face her.