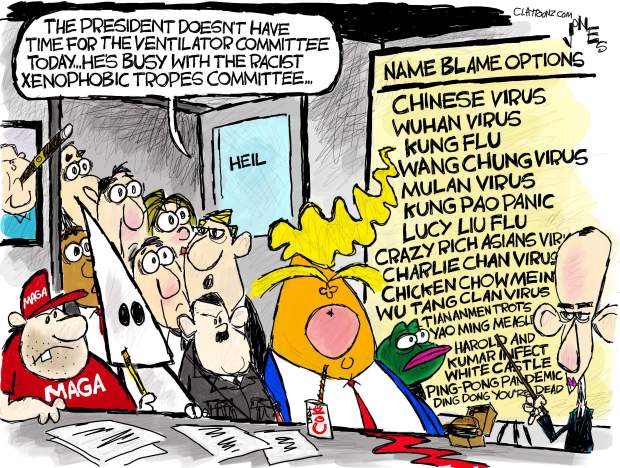 Yesterday, I had a Trump supporter tell me to “stop playing the blame game” and stop blaming “President” (sic) Trump. Three days ago, this idiot posted on Facebook that the coronavirus pandemic is a conspiracy. I get asked occasionally, “Why don’t you unfriend these hateful and stupid people?” Because I want to know the latest arguments and talking points they’re using. I want to know the daily outrage.

Usually, the daily outrage is “Obama, Obama, Obama.” Others over the past few months have been Hillary Clinton, Nancy Pelosi, Chuck Schumer, Adam Schiff, Alexandria Ocasio Cortez, the Superbowl halftime show, the “media,” and invisible things that persecute Trump cultists. It’s kinda crept up slowly, but now the outrage is China.

Fox News anchors have been calling the coronavirus the “Chinese virus” and the “Wuhan virus.” Why? because it’s a racist trope that caters to the racist base that makes up their viewership and it deflects blame from Donald Trump.

It’s true that China has started a propaganda campaign placing blame on the United States. It’s also true that Trump and his team are waging a disinformation and hate campaign in return. The Secretary of State has referred to it as the “Wuhan virus” at least six times. The Trump campaign said on its website, “America is under attack — not just by an invisible virus, but by the Chinese.” That creates a stigma.

Kellyanne Conway said Donald Trump was trying to be “accurate” and, “I think what the president is saying is that is where it was first started.” Republican fucknut Senator Charles Grassley tweeted, “I don’t understand why China gets upset bc we refer to the virus that originated there the ‘Chinese virus’ Spain never got upset when we referred to the Spanish flu in 1918&1919.” No one is sure where the Spanish Flu originated, with many saying Spain, China, Austria, a UK military camp in France, and…Kansas. It flared up during World War I with most signs pointing at the world’s militaries of being the cause and carriers. It got the name “Spanish Flu” because Spain was neutral and the allies agreed to give them the name, thus removing blame from themselves. Maybe by blaming Spain with the name (and we were recently in a war with them), there wouldn’t be any resistance from the European nations we were at war with who were also fighting the pandemic. Anyway, Charles Grassley is an idiot.

It’s not just hateful to blame the government of China for the virus. It’s also hateful to people of Chinese descent. Hell, even people descended from other Asian nations are being blamed. There have been reports of attacks and slurs cast at Asian-Americans. Even Trump-supporting white people married to Asians are confused by which Asians to blame.

CBS News reporter Weijia Jiang tweeted, “This morning a White House official referred to #Coronavirus as the ‘Kung-Flu’ to my face.” Kellyanne demanded the reporter to tell her who said it, thus demanding a reporter to reveal her sources. While Kellyanne said it was wrong to say “Kung Flu,” she defended Donald Trump’s use of “Chinese virus.”

Kellyanne pulled out her imaginary Get-Out-Of-Racism-Free card by pointing out she’s married to an Asian, as George Conway is half-Filipino. That was weird. She’s married to the guy and doesn’t seem to understand Filipino is not Chinese. That’s like saying I can’t be prejudiced against Germans because I have English ancestry. We’re white so we all look alike, right? Is that what Kellyanne was trying to say about her husband and children?

Also, like Europeans can hate other Europeans and Muslim nations hate other Muslim nations, there are Asians who hate Asians. Go to China or Korea (either one) and ask them how they feel about the Japanese. No race is monolithic. You’d think someone married to someone of a different race would understand that. But, if George hasn’t convinced Kellyanne that Donald Trump is a racist grifting conman with brain worms, he’s probably not going to be able to convince her Filipinos and Chinese aren’t the same.

Blaming China takes the heat off Trump. It puts a face on the virus. It’s catering to the hate in Donald Trump’s base, which is what Trump and Fox News does best.

The universally recognized terms are “coronavirus” and “covid19.” Calling it anything with an Asian connotation is a distraction and entirely political. Anyone doing so has an agenda, and it’s a hateful agenda. It’s not about accuracy.

Donald Trump is now referring to himself as a “wartime president.” I found it scary enough when he referred to himself just as “president.” During an actual war, President Franklin Roosevelt responded with racism when he put over 120,000 Japanese-Americans in internment camps…just because they were Japanese. If a good president like Roosevelt can do something so hateful and prejudiced, what will a bad, racist, hateful president like Donald Trump do, even if his war is pretend?

The virus isn’t prejudiced, racist, or partisan. It doesn’t have yellow, black, brown, or white skin. It doesn’t care about your tax bracket. Tax cuts will not kill the pandemic. Neither will Donald Trump’s hate and racism.

Racism is a virus and a plague…just like Donald Trump.