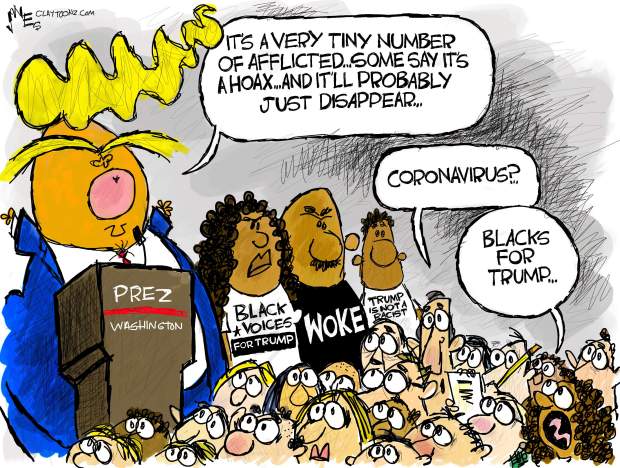 There are mysteries in the world and some things you just can’t explain, like how does Matthew McConaughey have an Oscar? Why? Why? Why? Doesn’t make sense, does it? But you have to understand that not everything fits stereotypes and expectations, like having an Oscar doesn’t really mean you’re a good actor or that a Grammy means you’re a good musician…or even a musician.

But people are not monoliths. Not every European teenager is enlightened and cares about the planet. While Sweden’s Greta Thunberg is out there fighting for climate awareness, there’s Naomi Seibt from Germany, who the Heartland Institute (a right-wing think tank) is using to debunk science while also saying white nationalism is an “inspiration.” I guess the Nazi from Ace of Base was busy.

Donald Trump only got 8 percent of the black vote in 2016. What I wonder is, “why so high?” A Public Religion Research Institute poll taken last December said 83 percent of black Americans don’t approve of Trump. Again, why so low?

And while Donald Trump can have a bunch of black supporters in the Oval Office declaring he’s not a racist, a Washington Post-Ipsos poll found that 83 percent (same number as the other poll) of African Americans believe Donald Trump is a racist. That’s the thing Republicans don’t get which proves they are racist. The black friend defense doesn’t work.

Republicans, pay attention and read it slowly: Labeling somebody does not mean you’re not a racist. Having a friend who is black is not a get out of racist jail free card. Even being married to someone of a different race and having children together doesn’t mean you’re not a racist. Strom Thurmond fucked black women. And I know what you’re thinking. Why did anybody fuck Strom Thurmond?

I can tell you Louis Farrakhan doesn’t hate white people, but my whiteness doesn’t make me an authority on it. For every black person you can find wearing a T-Shirt that reads, “Donald Trump is not a racist,” I can give you eight who will tell you, “Yes, he is.” That’s because Donald Trump is a racist. Oh, and for the record: Most people wearing “Blacks for Trump” T-Shirts look like they should be in Ace of Base and probably fucking Strom Thurmond.

Donald Trump’s campaign is opening 15 field offices in cities with large African-American populations, in an attempt to court black voters this November. He may as well be opening CD stores that only sell “Ice, Ice, Baby” or better yet, put Stephen Miller in the middle of Watts handing out copies of La La Land (I’d like to see that). In addition, Trump’s website is now selling T-Shirts with the word “Woke” on them. Trump may as well be selling shirts that read “C2H6 + O2 → 2CO2 + 3H2O” because he doesn’t understand what that means either.

Also, don’t create a monolith about blacks for Trump and say that they must be very stupid. That’s not fair. All Trump supporters are stupid.

While you, I, and surely the majority of black Americans, don’t understand Blacks for Trump, you have to remember that Charlie the Tuna wanted you to eat tuna.

Blacks for Trump is a huge mystery because Donald Trump is a racist who defends Nazis and makes a lot of racist comments like, “shithole countries,” “send them back, “there’s my African American,” “Execute the Central Park Five,” “Fire that sonofabitch,” people from Nigeria who come to this country will never “go back to their huts,” Haitians “all have AIDS,” or the entire birtherism campaign against President Barack Obama. You know Donald Trump doesn’t care about black people. But why should black Trump supporters be any different than white Trump supporters?

Because Donald Trump doesn’t care about them either.