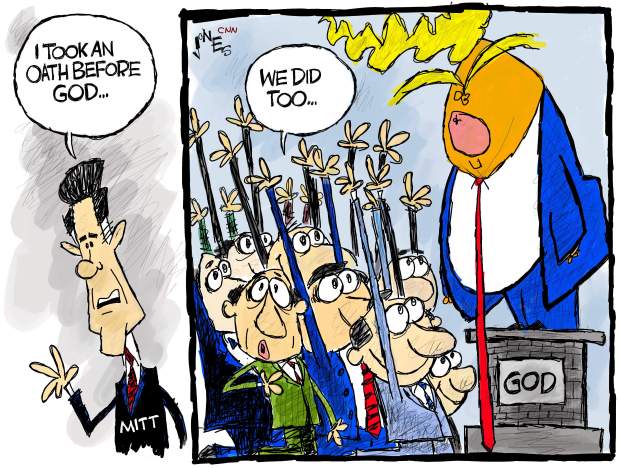 I’m going to use this cartoon to digress and rant on something that kinda annoys me.

The thing that annoys me about Trump supporters is that they have to pretend Donald Trump is a lot of things he’s not. Self-made billionaire, smart, honest, great negotiator, non-racist, not corrupt, etc, etc. In fact, I have never heard or read a pro-Trump argument or defense that didn’t contain at least one lie. So, when I hear Christians and Evangelicals praise Trump, I know they’re phonies.

A couple of my Facebook “friends” shared a link to an article about why a Christan can support Donald Trump. Of course, neither of these fine, upstanding Christian men care that the article contains bullshit. The piece, “How Can You Follow Jesus And Support Trump,”  written by a Shane Idleman, is total bullshit. The article is in a publication called Christian Voices which obviously has a low standard for journalism and not something on my regular reading list.

In the article, our author argues he’s in favor of legal immigration but only if the immigrants are “god-fearing.” So right away, he’s in favor of discrimination. He’s too stupid to realize he’s making that argument. My friends are too stupid to realize it also. If you’re arguing that you only want people entering this nation who believe in what you believe, how long until you say you only want people who look like you? But, it’s his choice of what issue to focus on when it comes to defending Trump. He makes the claim that Donald Trump isn’t separating families or putting kids into cages. That’s not just a lie. It’s a lie racists use.

Mr. Christian writing man, if you’re such a great follower of Jesus, then why are you a liar? Yes, Donald Trump separated families after they crossed the border. Yes, he put kids in cages. They even forced minor children to go to court alone. It was part of his policy. He’s on record advocating for this. His Attorney General at the time it began, Jeff Sessions, made a speech announcing the policy and giggled about it to the point I thought they were going to have to administer oxygen to the racist elf. If this policy didn’t exist, then why did a court order them to stop doing it? You’re a liar.

Nowhere in the article does he mention Donald Trump lying, his love for Putin and cheating in an election, grabbing pussies, his racism, or stealing money from a children’s cancer charity. The guy would rather complain that the media is out to get Trump and his supporters. But there’s the thing about that argument, they never point what the media is lying about. Or, at least not successfully. There’s also an argument about socialism which is another huge lie unless the writer is totally ignorant on the subject, which is possible. So once again, another Trump defense based on lies.

These Christians argue they’re getting judges for supporting Donald Trump. But where in the Bible does it say you can trade in your convictions and principles for stuff? I went to church a lot when I was a kid. Really. I don’t remember that sermon. And the other thing about these judges, our Christian friends don’t care by what means they get their stuff. They don’t care if the seats are stolen (and they stole more than one Supreme Court seat) or that you have to cheat in an election to get them.

The thing is, you never had convictions or principles. You were lying then just like you’re a liar now. But we’ve known that for a long time from your silence on government spending when a Republican is in control or from your love of the death penalty while claiming you’re “pro-life.”

The author says they’re not following a man but a movement. Your movement is a cult. You don’t follow Jesus anymore if you ever did (who, by the way, was a socialist). You follow Donald Trump because he’s your god, which he stated when he claimed he’s the “chosen one.” Guess what. That wasn’t mentioned in the article either.