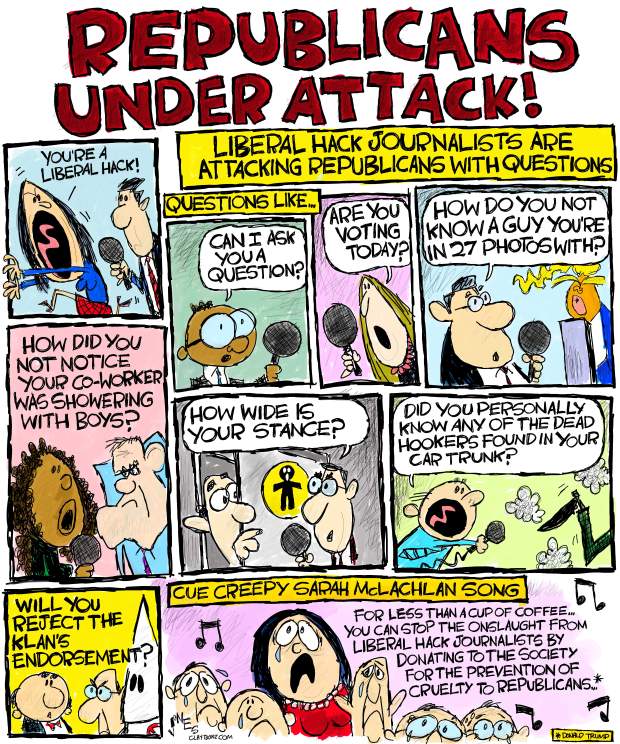 Later, McSally went on Fox News to talk about her harrowing experience of being asked a dangerous question by a liberal hack reporter. The Fox News hosts she chose to talk to about hacks in the media were Laura Ingraham and Sean Hannity. Nobody detected the irony and hypocrisy.

While screaming over it, Hannity said about CNN, “They’re not a news channel. They’re state-run, radical, leftist, socialist TV.” Again, no irony detected. A person has to be smart to catch that.

McSally said to Sean, “I actually thought they understood that they were liberal, that they were a part of kind of helping with the Democrat agenda.” Hello? Irony? Is this thing on?

Now, McSally, the unelected Senator, is campaigning on it. She has an ad on her site asking for at least five bucks. Even the Trump campaign is using it.

In decrying the way she was assaulted by Manu Raju, she said to Hannity, “I was a fighter pilot. This was a choice I made. I did not crumble under their pressure. I have flown A-10s in combat.”

It’s a good thing too that she has that experience in combat so she won’t crumble under the pressure of being asked….”should the Senate consider new evidence as part of the impeachment trial?” Oh my God! How is she still standing? The strength of this woman to continue to carry on despite the brutal beatdown of being asked a question about her job! What will they ask next? The time? How’s the weather? Do you bleach above your upper lip?

Hold your children close tonight and keep Republicans like Martha McSally in your thoughts and prayers because if I know the liberal hack media like I think I do, they’ll ask questions again. Oh, the humanity!!!