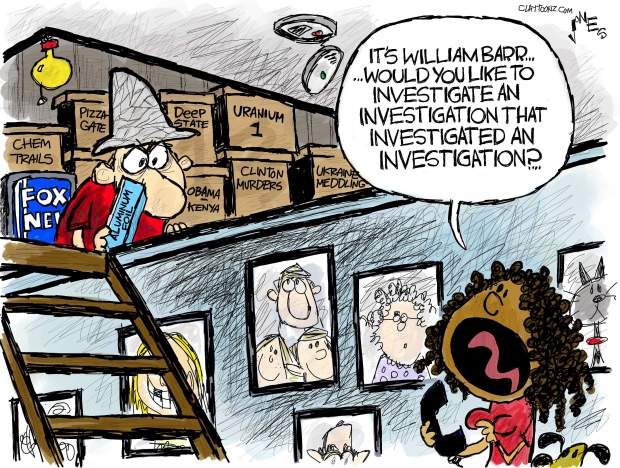 The tinfoil hat club got foiled. They got hoisted on their own petard, not that any of them knows what “hoisted” means or what a “petard” is.

Since he “won” the election, Trump has been screaming that the Russia investigation was a huge hoax, never should have happened, a coup attempt, illegal, an attempt to overthrow the government, and an act of the deep state. He claimed Obama wiretapped Trump Tower. He appointed an Attorney General, William Barr, who would champion his conspiracy theories. Barr even said he believed there was spying in the Trump campaign. There was, but it wasn’t from an American agency. But they don’t want to talk about that because they invited that spying.

Fox News’ Laura Ingraham, Tucker Carlson, and Sean Hannity all hailed that the report proved them right all along which proves they don’t actually read anything. William Barr released a statement saying, “The inspector general’s report now makes clear that the FBI launched an intrusive investigation of a U.S. presidential campaign on the thinnest of suspicions that, in my view, were insufficient to justify the steps taken.” Uh, no it didn’t.

Barr also said, “FBI officials misled the FISA court, omitted critical exculpatory facts from their filings, and suppressed or ignored information negating the reliability of their principal source.” Actually, that sounds like what Barr did when he presented a summary of the Mueller Report.

Donald Trump said the findings are “far worse than I ever thought possible,” which means he only read Barr’s statement.

What the IG report did was debunk their conspiracy theories. Other than discovering Ivanka Trump and Christopher Steele, who wrote the infamous dossier that mentions a pee tape and whom Trump and his cult have been attacking for years, had a friendship that was described as “personal,” we didn’t really learn anything from the report. And before I get too distracted, “bow-chicka-wow-wow?”

The report stated the Steele Dossier didn’t play a role in opening the investigation. While the report found faults in some warrant requests that used information from the Steele Dossier, the FBI started the investigation based on a tip it received days before about a Trump campaign adviser, George Papadopoulos, from a foreign ally, Australia. If you’re not wearing tinfoil on your head, you already knew this.

What is true is that our ally, Australia, was more concerned about protecting our national security from an attack from Russia than Donald Trump or his idiot son, Donald Trump Jr., was. While Australia was telling the FBI that Russians were spying on the Clinton campaign and giving the material to the Trump team, Don Jr. was inviting Russians into the campaign headquarters. If you haven’t been drinking the Trump cult Kool-Aid, you already knew this.

Trump and his cult have repeatedly attacked Lisa Page, a former FBI lawyer, and Peter Strzok, a former top FBI agent, who were both removed from the Russia investigation after text messages uncovered between the two showed “hostility” toward Trump during his candidacy. But, Page didn’t have any role in opening the investigation and Strzok was not the man in charge of it. Deep-state conspiracy theory foiled. No political bias was used in the investigation. If you don’t have your head buried up Trump’s ass, you already knew this.

The report didn’t mention Obama wiretapping Trump Tower which is a claim Trump made shortly after he assumed office, but never corroborated. It was a Trump lie. Another detail that foils the tinfoil hat club is there was only one member of the Trump campaign the FBI was wiretapping. That was Carter Page. They didn’t even request warrants on George Papadopoulos, campaign chairman Paul Manafort or Michael Flynn, who all had connections to Russia. If you’re not a Fox News viewer, you already knew this.

The FBI did not plant spies in the Trump Campaign. What the report found is there were members of the campaign who sent information to the FBI, but none of that affected the investigation because all that information was all over the internet.

When Russia attacks our election, we need to investigate it. What we shouldn’t do is attack the investigators. What we shouldn’t do is defend Russia. Donald Trump, William Barr, the idiots at Fox News, and your idiot tinfoil-hat-wearing, attic-dwelling uncle whom you hate having over for Thanksgiving have spent the past three years defending Russia and putting Putin before America.

William Barr didn’t have the Inspector General investigate the investigation to produce facts. He created it to support Trump’s conspiracy theories. If you read Barr’s statements on the IG report, you’ll see he’s only talking to Donald Trump. He’s ignoring a report he demanded from his own department.

There is not a deep state. What we can take solace from is that there are still honest and ethical people in the government who will defy the cult members Trump has appointed.

There is not a deep state. There are no chemtrails. Obama did not bug Trump Tower. Uranium One has been debunked. The Clintons didn’t kill Jeffrey Epstein. There weren’t millions of illegal voters. Obama was born in the United States. Hillary Clinton didn’t run a child-sex-slave ring in a Washington pizza joint. It was Russia, not Ukraine, that meddled in the 2016 election. There are no lizard people.

What we do know from the report is that Donald Trump and William Barr are liars who will use government resources to rig the system. But, if you don’t watch Fox News, drink the Trump cult Kool-Aid, wear a tinfoil hat, or have your head buried up Trump’s ass, you already knew that.