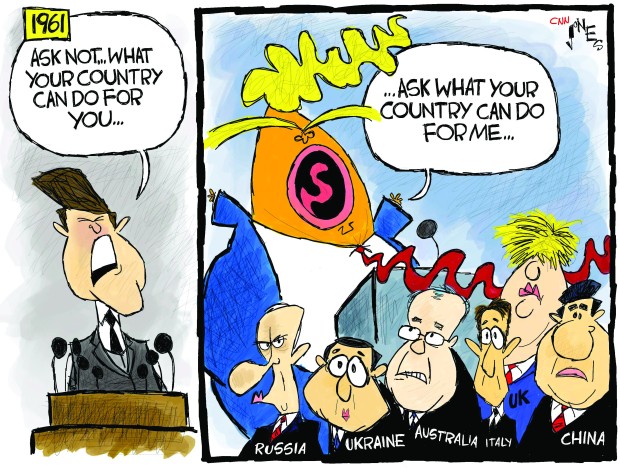 Donald Trump is admitting he’s corrupt and he’s daring Congress to do something about it.

He’s admitted asking Ukraine to investigate a political rival. In the summary of the transcript, he’s telling the president of Ukraine to talk to his PRIVATE lawyer about investigating his political opponent and chasing down conspiracy theories. He also asked him to get together with his attorney general in regards to these political pursuits.

Last week, he publicly asked Ukraine and China to go after his political opponent. Marco Rubio said he was trolling the media, which is part of the narrative of “he didn’t actually say it” to “he was joking” to “you didn’t understand it” to “yeah, he said it, so what?”. Now we can add, “he was only trolling.” It helps his supporters ignore the fact he’s committing a crime right in front of them.

Now it’s come out he’s asked Italy, Australia, and the UK’s Boris Johnson, just two days after he became prime minister, to help him perpetuate conspiracy theories for his political benefit. Foreign policy often comes with conditions attached, but not personal ones for a leader of a Democratic nation. For Trump, our foreign policy circles around what can our friends and foes do for Donald Trump.

Asking a foreign nation to help with your political campaign, even if you don’t receive it, is illegal. That’s not debatable. This is corruption at its core. Those who can’t see that and still continue to defend Donald Trump are putting the cult before their nation.

If you ask what our country can do for Donald Trump, I suggest it give him an impeachment.