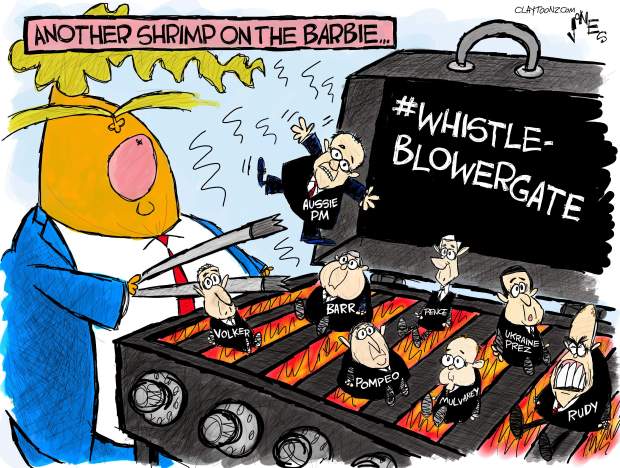 Everything Donald Trump touches dies. That presents a quandary for world leaders as they’re challenged to continue normalized relations with the United States without being covered head to toe in orange feces.

The U.S. has the world’s largest military. Our finger is in every pie and we dish out more foreign assistance than any other nation. That hasn’t changed with an insecure narcissist with the vocabulary of a Rottweiler at the helm. Typically, American foreign policy doesn’t change with political parties in the White House. Our friends and foes remain the same. But now, other nations have to extend themselves beyond being friends and allies and must reduce themselves to placate Donald Trump’s ego and kiss his ass. We are learning for some, that goes beyond sword dances and extends to patronizing his conspiracy theories.

Outside of this country, Donald Trump only has a positive approval rating in two countries. Israel and Russia (surprise!). If a foreign leader isn’t careful when dealing with Trump, he could go from watching his own approval ratings go down and start hearing his constituents call him Monica Zelensky. The stain of Donald Trump has ruined previously respected reputations of people like H.R. McMaster, Rex Tillerson, and Kanye (that’s a joke), but as we’re learning now, the funk of Trump extends beyond our borders.

When William Barr became attorney general, many wondered if he’d maintain the independence of the Justice Department or act as a stooge and personal lawyer for Trump. That mystery was solved when he interpreted the Mueller Report as clearing Donald Trump of any obstruction, which of course, the report did not do. Barr is also playing to Trump’s hatred and conspiracy theories by reopening investigations into Hillary Clinton’s emails and the Steele dossier. We learned from the summary of Trump’s chat with Ukraine’s president that Barr is acting as Trump’s personal lawyer, goon, and co-conspirator in chasing conspiracy theories and roping a foreign nation into helping Trump’s re-election campaign. It will be interesting but not too surprising if the nation’s top lawyer is indicted.

Kurt Volker was a special envoy to Ukraine. It was his job to mediate peace between that nation and Russia. And then, Rudy Giuliani showed screen grabs on an iPad of text messages allegedly from Volker that showed he was aware of Rudy’s meddling in Ukraine for Donald Trump’s re-election campaign. Soon after, Volker resigned. Ukraine and Russia are no closer to peace and Volker’s reputation has an orange stain.

Secretary of State Mike Pompeo was on This Week and was asked about whistleblower complaint. He said he hadn’t seen it. What he failed to disclose was that he was on the call where Trump pressured Ukraine’s president for dirt on a political rival. Now there are questions about how deep Pompeo is in this scheme. Did he help make the decision to hide records of the call in the server normally reserved for classified information? Why didn’t he reel Trump in when he started blackmailing Ukraine’s president? Why is he carrying water for Trump’s conspiracy theories? What does Mike Pompeo know and when did he know it? Pompeo used to have a decent reputation. Not anymore. The House has subpoenaed records from the State Department and it has until October 4th to comply.

Mick Mulvaney, the “acting” chief-of-staff, is implicated in this mess. He was told to withhold the funding granted by a majority of both houses of Congress for Ukraine. He was also told to lie about why it was withheld and not to give out any more information.

During a rambling presser at the United Nations, Donald Trump threw his vice-president, Mike Pence, under the bus when he said Democrats and the press should “look at Mike Pence’s phone calls.” See what you get for selling your soul and loyalty to Donald Trump? I guess Trump figures if he’s going down, he’ll take Pence with him. Do Republicans really want a President Pelosi?

Rudy Giuliani ruined his reputation a long time ago. Nobody takes the man formerly known as “America’s mayor” seriously anymore. Most people think he’s off his meds. Rudy has been subpoenaed by the House and they’re requesting text messages, phone records, and other communications they referred to as possible evidence. They also requested documents and depositions from three of his business associates. Rudy is floating the idea of not complying.

Volodymyr Zelensky is a former comedian, but he’s not laughing right now. Instead, the man who ran for the presidency of Ukraine is being mocked and laughed at and is being referred to in Ukraine as “Monica Zelensky.” The man who ran on an anti-corruption platform now has to explain why he promised to help America’s corrupt president engage in more corruption. Zelensky isn’t politically experienced enough to acquire U.S. aid without becoming a member of Giuliani’s Ukraine Clown Posse (credit to Virginia Bauman, @vaisfourlovers on Twitter, for that).

It was an Australian diplomat based in London who alerted the FBI that Trump adviser George Papadopoulos had told him in May 2016 that Moscow had incriminating “dirt” on Hillary Clinton. The diplomat’s alert is what triggered the FBI’s investigation in Russian meddling. While the Trump campaign was silent on being offered dirt by the Russians, it was an ally who warned the United States. Now, it’s been reported that Trump called Australia’s Prime Minister requesting help to find information to discredit the Russia investigation. The Aussie PM agreed. While that’s not directly helping an upcoming American election, it’s feeding into conspiracies over the previous one. Morrison could be chased out of office and sent to the Outback if enough Australians view the man as another of Trump’s flying monkeys.

Donald Trump will be impeached unless he resigns. There’s already been one resignation over this. It’s not the resignations that office pools across the country are based on. It’s the indictments.