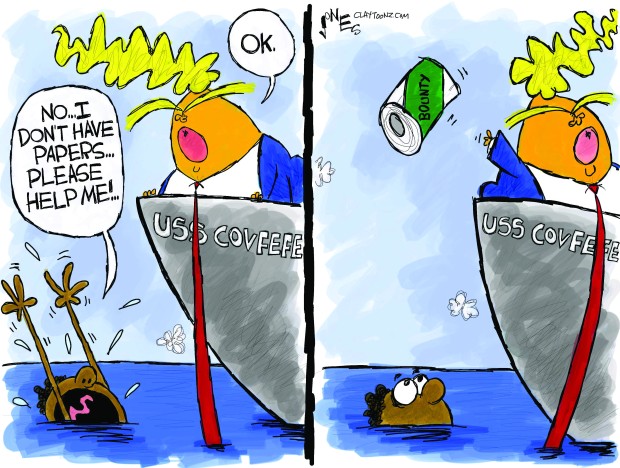 Donald Trump is an idiot and a racist which means he’s too stupid to come up with good covers for his racism.

Hurricane Dorian devastated the Bahamas last week with 200-mile-per hour winds for nearly 38 hours. At least 50 people have died and the Abacos islands are nearly destroyed. Many Bahamians are seeking temporary protection status in the U.S. and a bipartisan group of lawmakers, mostly from Florida, are calling on Donald Trump to relax visa requirements.

Naturally, since a majority of Bahamians’ skin has a darker pigmentation than “real” Americans, Trump isn’t enthusiastic about letting them into the country. But what excuse does he use to deny them?

Basically, Trump is saying the Bahamas is trying to send us rapists and murderers though he assumes, some are very good people.

As usual, Trump is lying. He’s arguing that drug dealers and gang members infiltrated the Bahamas to ride out a hurricane and use it as a cover to infiltrate the U.S. If you’re dumb enough to buy that, well, you’re a Republican.

The DEA said in a 2018 report (if you’re a Republican, 2018 was last year) that only seven percent of cocaine, heroin, and marijuana came to the U.S. from the Caribbean in 2017. In fact (if you’re a Republican, a “fact” is something that is true, not something that comes out of Trump’s mouth), the DEA says there’s been an increase of drugs entering the Bahamas from the United States.

Do you know what I hear about the United States? I hear there are some very bad people, and some very bad bang members, and some very, very bad drug dealers there. It’s so bad that Republicans are wearing ugly red hats stating the country isn’t great.

Also, maybe nobody should let us into their country because I hear the United States has a very, very bad president.