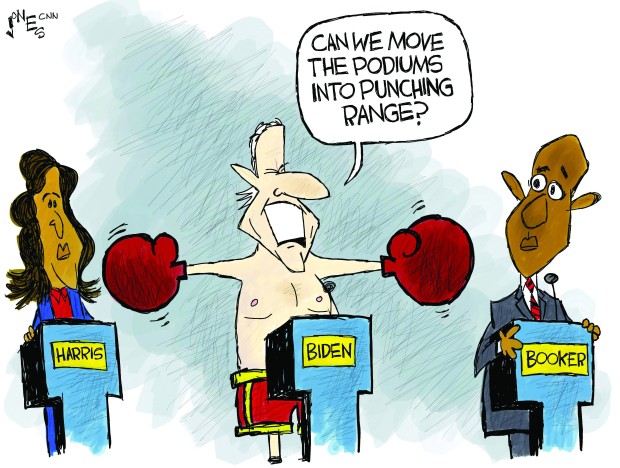 There will be two Democratic debates this week on CNN, one on Tuesday and Wednesday nights. They’re being staged in Detroit. Michigan is a state Trump surprisingly won in 2016 with a huge assist from Russia. It’ll be a major battleground in 2020.

What analysists are focusing on before the debates are that on night one, Elizabeth Warren and Bernie Sanders will be on the same stage. On night two, Biden’s podium will be between Cory Booker and Kamala Harris, the two candidates he’s been feuding with.

The expectation is that Warren and Sanders, the two most liberal and socialist candidates, will have to go after each other at some point. I don’t expect that yet. It’s too early. What we can expect on night one is a moderate Democrat going after both of them. We may see the socialists team up.

Biden has promised not to be as polite as he was during the first debate where Harris took him down for his stance in the 70s on mandatory busing. He’s also been at it with Booker who has demanded Biden apologize for boasting about his working relationship with segregationists in the past. Biden wasn’t ready in the last debate. Will he be ready now?

Biden is the favorite candidate at this point and leading in the polls. Even a Fox News poll has him beating Trump. But what happens when he’s on a debate stage with Trump? Personally, I’d rather see Kamala Harris, a former prosecutor, prosecute Donald Trump to his face.

Other things to look for is that Andrew Yang has been going at it with Michael Bennett. Does anyone care?

We can look at Tom Steyer. Oh, wait. He won’t be at the debate and is one more candidate we don’t need.

Will Pete Buttigieg build, fall, or continue to tread water? Will Julian Castro build on his great performance from the first debate? Will Beto finally fold and drop out?

That’s the thing to look for after the debates. After the last one, Eric Swalwell did us all a favor, and himself, and dropped out. He’s doing a great job in Congress and that’s where he should stay. But right now, there are too many candidates. I’d like to see ten of them drop out. C’mon, guys and girls. Go home.

Previously, I didn’t have a favorite. I was going back and forth between the candidates and there are several I still like. But, now I do have a favorite and its been that way for the past few weeks. My pick is Kamala Harris. I like her. She’s a fighter and Donald Trump is afraid of her. I love the job she’s performed in grilling Trump nominees from her position in the Senate. I’m not saying she’s going to win, but that she’s who I want to win. At least for now. I have the right to change my pick. But right now, Kamala is the only one I can feel any excitement for.  I think with the right campaign, she can beat Trump.