Hey, kids. It’s time to check out some cartoon ideas that didn’t make the cut. Each of these is from the batch submitted to CNN last week.

We were set on the Democratic debates being our subject. This was a fun week as the newsletter was published on Friday instead of the usual Sunday. This made the deadline flexible and had me drawing in real time during the debate with Rich, my editor, sending me notes during. The rough above was sent Thursday morning before the second debate. 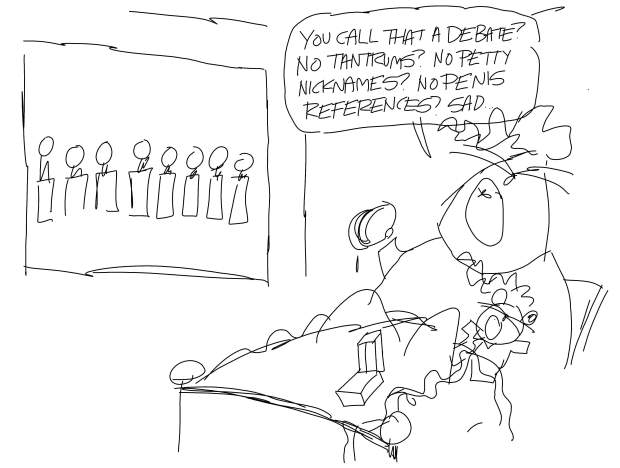 I almost finished this one for my syndication. Maybe I shouldn’t be posting it here as I can always use it for a future debate. Maybe I’ll still do that if it’s not stolen by another cartoonist. I do like drawing Trump with Trump Bear. 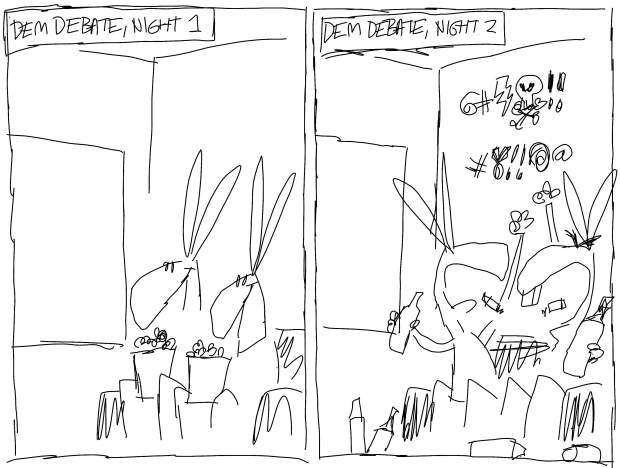 This was also drawn before the second debate. That’s kinda how it turned out too. Despite the accuracy, I still didn’t like it that much.

I drew this one before the second debate. This one has two problems. The first is, it wasn’t a townhall-style debate. The second one is, this would have ignored the narrative that came out of both debates. But, it’s another one that I can probably use in the future, again, if it’s not stolen.

This was drawn right after Kamala Harris took down Biden. My editor, who was watching it live like I was, wrote about the takedown and my reply included this cartoon, which was not very good.

Rich kinda liked this one but another editor thought it was too grim. I think that’s the word they used. That didn’t automatically kill it, but we kept searching. I wasn’t in love with it.

This is the idea we went with. They liked it but wanted to see more and wasn’t yet sure if this was the direction to go in. Rich said it may be the one to use. I drew a couple more but I kept going back fighting for this one. I knew it was the one.

The idea here is, Harris just took out Biden and now was aiming for Trump. I didn’t love it and continued to push for the first bus idea.

Honestly, I thought if I threw in some Klansmen, it’d make the other idea look better by comparison. Yikes! We can’t publish a cartoon with Klansmen, let’s go with that other idea. I don’t know if it worked that way because they finally chose my favorite after I pushed for it a couple more times. They ever agreed with me or got tired of hearing it.

In the future, every rough in the batch will have Klansmen except for the one I really want. Do you think they’ll catch on?

The cartoon, in its finished form, was a big hit on social media, at least on my accounts. I was a very happy boy. What made it really work out was that the Harris campaign released a childhood photo of her just as I was about to start drawing. I actually Googled for her childhood photo, seconds after the campaign had released it. It was kismet. 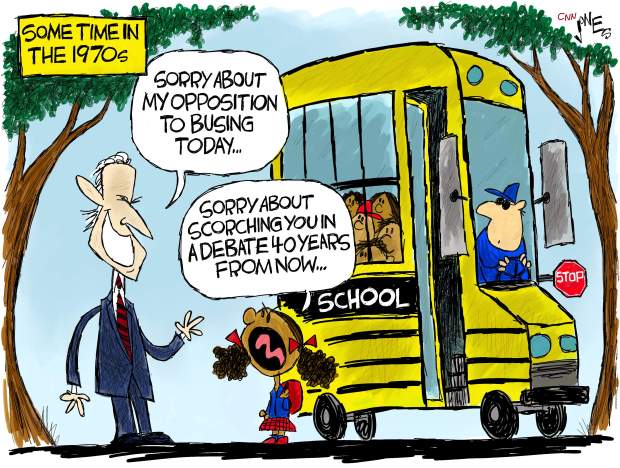