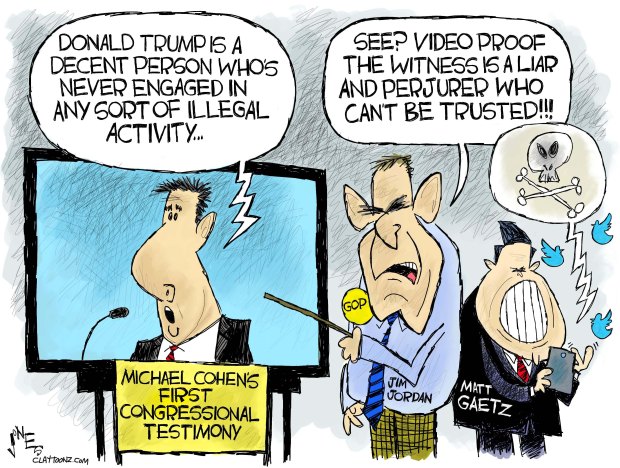 Republicans, ranking member Jim Jordan in particular, pointed out that the first witness called for the first hearing in the Democrat-controlled 116th Congress is a man convicted of lying to Congress. Since Jordan is a Republican, his opening remarks and point was…wait for it…A LIE! This is actually the third hearing in the 116th Congress and since those hearings had witnesses, Cohen is not the first.

Each Republican on the House Oversight Committee used their time to attack Cohen as a liar and convicted perjurer. Nobody defended that, including Cohen because he’s a liar and convicted perjurer. Michael Cohen is going to prison for his lies. The Republicans even went as far as propping up a poster of Cohen’s face with the text, “Liar, Liar, Pants on Fire.” Seriously. Unfortunately for the Republican members on the committee, they forgot three things.

The Republicans forgot to defend Donald Trump. They forgot the man they’re protecting is a known pathological liar. Mostly, they forgot what Cohen was lying about and for when he committed perjury before Congress in his first hearing. Men who are destroying their credibility for Donald Trump were attacking the credibility of a man who destroyed his for Donald Trump.

Former New Jersey governor Chris Christie said on ABC that he can “guarantee” Trump is “sitting in Vietnam right now, fuming that no one’s defending him.” He also argued the performance was “either a failure of those Republicans on the Hill or a failure of the White House to have a unified strategy with them.” One senior House Republican who requested anonymity told The Washington Post, “The reason there was no defense is because there is no defense.”

Cohen is Trump’s former fixer, and it seemed like each Republican on the committee was angling to be his replacement.

One attempt to defend Trump was when Mark Meadows brought one of Trump’s few black friends to stand behind him as a prop as he challenged Cohen’s allegation that Trump is a racist. He literally played the black friend defense. Then, Meadows got upset when it was pointed out he used a black person as a prop, which in itself is racist. His defense of not being a racist was…wait for it…he has black friends.

Freshman Ayanna Pressley asked Cohen a question that was probably more for Meadows. The Democrat asked, “Would you agree that someone could deny rental units to African Americans, lead the birther movement, refer to the diaspora as ‘shithole countries,’ refer to white supremacists as ‘fine people,’ have a black friend, and still be racist?” That answer was “yes.”

Cohen alleged that Trump knew about the hacking of the Democratic National Committee before WikiLeaks had released the documents. He also claimed Trump reimbursed him for hush payments to women while he was president, and said Trump called him at one point to ensure he kept lying about those payments. He also produced the checks showing Trump had reimbursed him, which were made out, signed, and dated after Trump became President Trump. He even implicated Don Jr. and Ivanka in the Moscow Trump Tower project.

Cohen described Trump as a conman, a liar, and a racist. Stuff we already knew. He claimed Trump had him threaten people over 500 times, which is almost as many times as the committee Republicans said “liar, liar, pants on fire.”

Cohen, the liar, even defended Trump from a few rumors, such as having a love child, striking his wife, ordering Roger Stone to engage with Wikileaks, and the Russians possessing a tape that could be used as blackmail against Trump (you know, the pee tape). But then again, Cohen is a known liar and Republicans say we shouldn’t believe him.

Republicans still don’t get it. If there is a danger, you need to address it. Not hide and protect it. If the president of the United States has broken the law, cheated to win the election, obstructed justice, or sold his nation out to an adversarial nation for his financial interest, it’s in every American’s best interest to know the answers.

When the Republicans controlled the committees, they refused to ask questions or even call some witnesses in their campaign to defend Trump. Then-Intelligence Committee Chairman Devin Nunes used his position and hearings to gather intel to update the White House. They worked to protect those who may have betrayed the nation. They attacked law enforcement while defending a suspected Russian spy. This week, Republican Matt Gaetz tweeted a threat to Cohen the night before his testimony, which is a crime and a very Michael Cohen kind of thing to do, back when he was Trump’s fixer. Jim Jordan complained that there was even a hearing today, and these are the guys who created five different House committee investigations into Benghazi.

Republicans claim Michael Cohen is lying in his attacks against Trump. What Republicans are truly upset about is that Cohen has stopped lying for Trump.

It’s one thing for your crazy Republican uncle to refuse to defend America. It’s another for those elected and whose job it is to defend our country. Republicans have proven time and time again they’re more interested in being Trump sycophants, stooges, and cultists than defenders of our nation.

Republicans need to stop being Republicans for a minute and start being Americans.