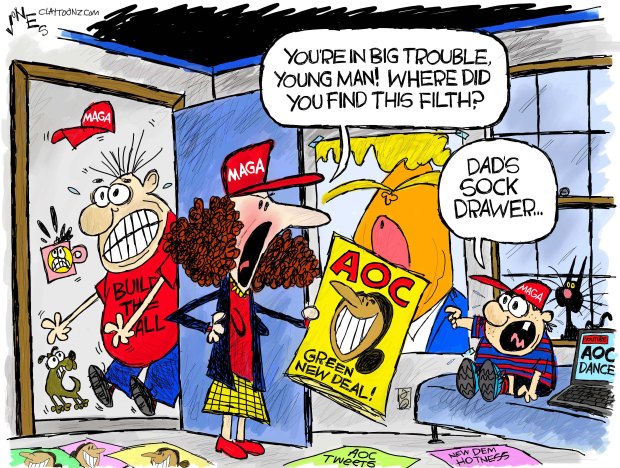 Republicans have an Alexandria Ocasio-Cortez fetish. Who can blame them? But still, while hating everything she stands for, they’re making it clear that it’s more about her than about the positions she’s advocating. Take the Green New Deal as an example.

The Green New Deal is a resolution pushing the United States 100% renewable, zero-emission energy sources by 2035. Republicans hate this because it’s environmental and they can’t understand it. How dare she.

While the resolution focuses on investments in electric cars and high-speed rails, eventually replacing buildings, creating new jobs, improving healthcare, and combating poverty, the most Republicans can get it out of it is that it’ll turn us into socialist Venezuela and ban cows from farting. Seriously.

I have seen about ten cartoons from conservatives about AOC banning cow farts proving they either haven’t read the legislation or that they’re lying about it. But, conservative cartoonists are used to crapping out cartoons.

While it is kinda sorta funny in a low-brow way to joke about cow farts, they actually are a major contributor to methane in the atmosphere. But, nobody’s talking about getting rid of cows or discovering some way of making them stop farting. If you want to change cow farts,  you have to change the humans who are handling the cows. By the way, I’m sure Venezuela has its share of farting cows. Stalin, for all his tyranny couldn’t stop cows from farting. Besides, we all like steaks, cheeseburgers, and ice cream. We’re not getting rid of cows.

But, all the anger over this is directed at AOC. Bad girl! Grrr! Anger! Fuming Facebook memes! While directing all this hostility toward her, very few actually counter her positions. None of these conservatives can take her down. And, when a high-profile conservative attempts to do so on Twitter, they get taken down by her. Don’t mess with a woman who’s smarter than you.

I mentioned how many cartoons I’ve seen on cow farts, but the number on AOC alone is staggering. One cartoonist has drawn her six times over the past two weeks. Other conservatives are going after her with more frequency. A lot of it, most of it is sexism. Hashtag “AOC’ and “GreenNewDeal” on Twitter and see what turns up. Tell me if you see the name Ed Markey.

Why would I bring up Ed Markey, the Senator from Massachusetts? Because Markey is co-sponsor of the Green New Deal with AOC, yet you’re not hearing his name in all the criticism. For some reason, AOC is receiving all the scorn and poor Ed Markey is going ignored. Could it be…sexism? Old white guys just can’t catch a break.

Other things conservatives also leave out in their outrage is that the resolution is nonbinding and they don’t understand “net zero.” Look up “net zero and you may stop freaking out about environmental plans.

Senate Majority Leader Mitch McConnell plans to bring the Green New Deal up for a vote. This is a plan to see who supports it so they can use it against them, preferably Democratic Senators currently running for president. Of course, that overlooks the fact that the majority of Americans are for reducing our carbon footprint and they support the Green New Deal, even though they don’t understand it either. McConnell also hopes to increase attacks against AOC because that’s just good Republican strategy…maybe…they think.

The GOP went after her for saying the world will end in 12 years, when she was talking about the United Nation’s putting out a report that we have twelve years to change before it’s too late to change. They hang on her every word and look for gaffes, like when she said “ringworm” instead of “hookworm.” They question her intelligence even though they’re the party of Trump and believed Sarah Palin was ready for the presidency. They’ve gone after her for not being able to afford an apartment in Washington before she was sworn into Congress. They’ve made fun of her wardrobe. They’ve manufactured a viral lie about her credit rating. Tucker Carlson recently called her a “screechy moron.” They even released a video of her dancing while in college, which only made her more appealing.

Alexandria Ocasio-Cortez is everything Republicans fear in one package. An intelligent, Hispanic, liberal woman looking to change the future. While they’re very vocal about her, I don’t want to know what sort of icky thoughts are in their heads.