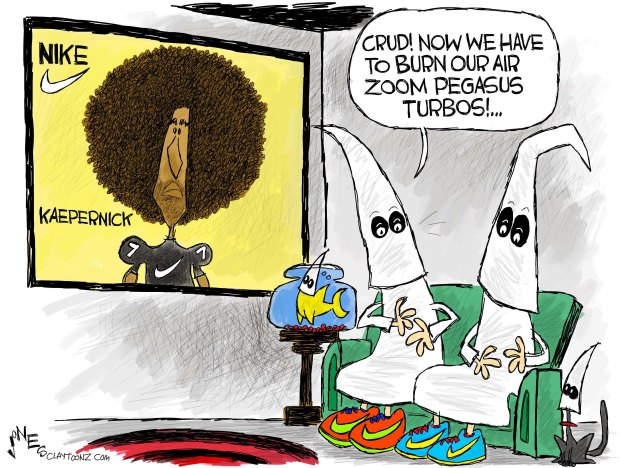 This Thursday is the start of the NFL’s regular season, but as we all know, racism doesn’t have an off-season.

The Republican gubernatorial candidate in Florida said voting for his black opponent will be “monkeying” it up. There are racist robocalls in Florida targeting those like-minded with a “we the Negroes” theme. The president of the United States is spreading a fake story that blacks are killing white farmers in South Africa. Other racist robocalls in Iowa are using the murder of a college student to inflame hatred toward Hispanic immigrants with the message “Kill them all.” A Pennsylvania Republican County secretary just resigned from her position referring to black NFL players who kneel during the national anthem as “baboons.”

This is Donald Trump’s America, where conservatives express hostility toward a black athlete protesting police violence and a discriminating legal system. They claim he’s disrespecting the anthem, the American flag, and our troops, though there’s no evidence of that and the athletes have explained their position. And, who is directing this national outrage at those accused of disrespecting the anthem, flag, and troops? A man who dodged military service by citing bone spurs, said POWs aren’t heroes, that he likes people who aren’t captured, quarrels with Gold Star families, doesn’t know the words to the national anthem, and thinks some of the stripes in the American flag are blue.

Colin Kaepernick is credited and blamed for starting the kneeling during the national anthem. Donald Trump attacked him which encouraged more athletes to kneel. This provided more red meat for Trump to throw to his base as he’s told his rallies that NFL team owners should “fire that son of a bitch” when an athlete kneels. Afraid of being bullied by Trump, no NFL team will hire Kaepernick today, and he’s filed a grievance lawsuit against the league. ESPN, hoping to avoid controversy, won’t air the playing of the anthem.

One corporation isn’t afraid of Donald Trump and that’s Nike. The shoe and athletic apparel company have made Kaepernick the centerpiece of their “Just do it” campaign. Trump sycophants and other conservatives, racists, and anyone with trouble comprehending are now promising to boycott Nike.

Nike is betting on the 18-to-29 age group and not the grumpy, crusty, old man group using race as a wedge issue in their grandstanding. Kaepernick’s jersey became a top seller after he started his protest and remains so today.

While racists are promising to boycott Nike, I thought maybe I should help support a company that’s on the correct side of the race issue by purchasing one of their overpriced shoes. Then I realized that Nike owns Converse and I already own three of those.

The NBA is less intimidated by Trump and his rabid followers of loony idiots. They didn’t freak out when their biggest star called Trump a “bum,” and one owner canceled a game over protests outside the arena over police shooting a black man. Americans need to take inspiration from those with backbones and stand up against tyranny and intimidation. I can’t tell you how many replies I’ve received from newspaper editors telling me they like my cartoons, but they’re too afraid of their readers to run them.

Conservatives campaign less on ideas and more on fear. We can’t allow ourselves to be intimidated and pushed around by demagogues and cowards. Nike won’t, Colin Kaepernick won’t, I won’t, and you shouldn’t either. It’s time to push back.