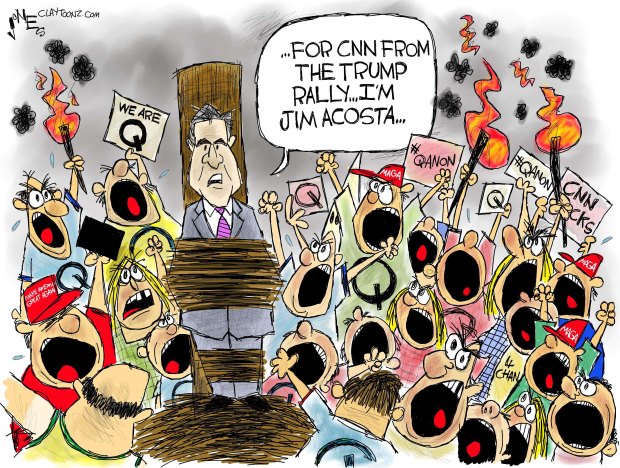 Donald Trump took his traveling freak show to Tampa Tuesday night and it was a coming out party for the worst of us.

He continued his war against the media, where he’s labeled them in the past as scum, dishonest, terrible people, bad actors, liars, fake news, and even the enemy of the American people. During the presidential campaign, he would single out MSNBC’s Katy Tur at rallies to the point she would need security to get out of the building without being harmed. In case you haven’t noticed yet, Donald Trump is a bully.

Another one of his favorite targets is Jim Acosta from CNN. On Tuesday, Acosta captured footage of Trump’s supporters screaming and cursing while flipping him off. Where do these people come from? They come from 4chan (and 8chan, which I just found existed. What the Hell is 8chan? A place for those who find 4chan a little too tolerant?).

4chan is a forum where right-wingers, racists, and conspiracy theorists can gather online and combine all their horrible traits into a wonderful and colorful cornucopia of duh. They call this group QAnon.

What is QAnon? They’re following someone named “Q,” who probably doesn’t exist or is a persona of multiple people, who claims to possess a top-level security clearance and evidence of a worldwide criminal conspiracy. It’s another deep-state conspiracy. In this one, Robert Mueller isn’t really investigating Trump. He’s targeting Hillary Clinton, President Obama and other members of the “deep state” like John Podesta and John McCain. The theories for why they’re being investigated range from being the real colluders with Vladimir Putin to being involved in a global pedophile ring that includes members of Hollywood’s A-list, like Tom Hanks.

Don’t look at me like that. I didn’t make this shit up.

Furthermore, they believe many of these individuals are wearing ankle bracelets for Mueller to track them and bring them into custody after Trump gives the order.

Maybe the “Q” comes from NyQuil, and they get their beliefs after downing several bottles of the stuff.

We can laugh at these people. We can find it highly amusing, and we do, because, “Ha-ha! They’re stupid!” But, we need to recognize the real danger in this Q thing.

It wasn’t that long ago that a conspiracy theorists, who got his information from some of the same sites as the Q-balls, went on a shooting spree at a Washington, D.C. pizza shop because he believed Hillary Clinton was operating a child-sex-slave ring out of the basement. The place doesn’t even have a basement, but I hear the pizza’s not bad. Unfortunately, most conspiracy theorists prefer Papa John’s.

In late July, a shooter killed five people at a Maryland newspaper. Trump paused for a few hours before he continued attacking the press because he’s classy like that.

This is dangerous because these people follow Donald Trump. Trump engages in conspiracy theories, and he loves to feed red meat to his base. In Tampa, QAnon signs were spotted as well as people waving some with “We Are Q,” and others wearing shirts with giant Q’s. I was most impressed so many Trump supporters didn’t misspell “Q.”

Wednesday, White House Spokesgoon Sarah Huckabee Sanders shared a conspiracy theory from the official WH podium to the media. If she is a member of the order, she’s not the only famous person. Roseanne Barr and Curt Schilling are members and have tweeted support and posted videos for the group on Facebook.

Trump tells his followers that they shouldn’t listen to the media and not to believe what they see and hear. That they should only listen to him. They’re listening. He’s also riling them up.

Jim Acosta described being at Tampa’s rally as “it felt like we weren’t in America anymore.” That didn’t even look 2018 to me. It more resembled Munich in 1923.

Sean Hannity piled on and lectured Acosta on how to do journalism which must be like getting a cooking lesson from Jeffrey Dahmer. Hannity said, “I’m actually going to give your network some advice, if you have an open mind and an open heart. The people of this country are screaming at you for a reason. They don’t like your unfair, abusively biased treatment of the president of the United States.”

No, Sean. They’re screaming at him because he is doing his job. If conspiracy theorists don’t like a journalist, then good on that journalist. But, why should any journalists listen to Hannity? Hannity doesn’t listen to them. He only listens to Trump.

Hannity is a conspiracy theorist and Fox News pays him around $20 million a year to go on their network at their most valuable hour to peddle bunk, not news. Do you remember the Seth Rich story? Hannity peddled that one until the brass at Fox told him to stop. He never corrected himself or apologized. What kind of news network puts on a conspiracy theorist taking his orders from Donald Trump? Fox News, that’s who.

Instead of defending journalists, facts, and information, Hannity stood up for the conspiracy crowd. What’s worrisome, since he has a direct line to him, is when the president will start publicly peddling these theories. Run, Forrest! Run!

Being a troglodyte is not how you make America great. Neither is being a willfully uninformed, stupid, conspiracy-theory believing sycophant who can’t think for himself.

If this QAnon-Hooterville consortium of knuckle-dragging Neanderthals is making America great again, I’m not seeing it.