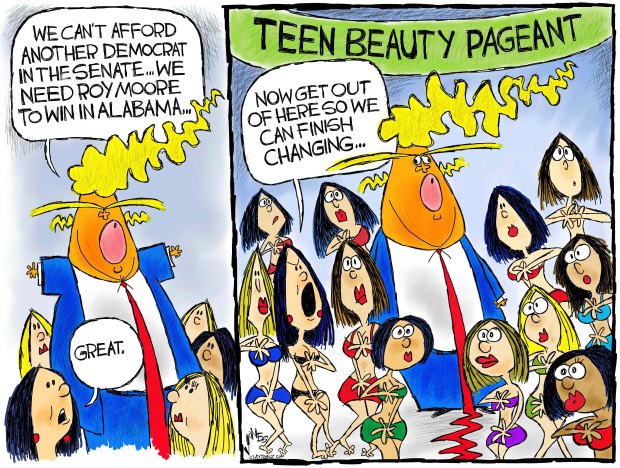 Many Republicans couldn’t stand to see President Barack Obama in the White House and fly in Air Force One. It insulted their senses. I can relate somewhat because I am disgusted by Donald Trump occupying the Oval Office and using the first plane. The difference between my repulsion and theirs is that mine isn’t based on race. I don’t care that Trump is orange. The other difference is that it’s not just about his occupation. It’s what he’s doing and what he is.

If Donald Trump was not the President of the United States of America, he’d just be your run-of-the-mill disgusting billionaire. But, since he is president we have this disgusting human being who can reverse positive changes set by his predecessors. He can pardon criminals because it makes his racist base feel good. He can appoint judges to life-long positions who have never tried a case. He can remove protections from national parks because some rich bastards seek to destroy the land for coal.

What’s really disgusting is that what’s reprehensible about Trump was overlooked, ignored, or celebrated by the people who voted for him. Hillary Clinton got in trouble for calling his supporters deplorable. But, make no mistake about it. They’re deplorable and I won’t apologize for saying it.

This president, who has deflected and defended Nazis, has now officially endorsed an accused pedophile. It shouldn’t surprise anyone that Mr. Pussy Grabber, who claims they let you do whatever you want when you’re famous, who has boasted about barging into dressing rooms of teenage beauty pageants, and has his own accusers in the double digits would endorse an accused pedophile. But, it’s alarming that the Republican establishment has sacrificed anything that used to resemble principles to follow Trump’s lead. The Republican majority leader, who threatened to expel Moore if he won, and the Republican National Committee are now supporting the guy. So much for the party of family values. As it turns out, they were just pretending to care about that values stuff, kinda like how they really feel about deficits and government spending.

Apparently, if you’re a vote to give billionaires tax breaks then you’re allowed to grope little girls.

According to Roy Moore, the Republican candidate in Alabama for the United States Senate who is accused of stalking, dating, and sexually assaulting teenage girls, Trump called him on Monday and said, “go get em, Roy.” That’s not something I’d say to an accused pedophile.

Like Trump, Roy Moore was unqualified for office before the sexual accusations came out. He’s an idiot who doesn’t understand the issues and a religious zealot who was kicked off the state Supreme Court…TWICE.

People say this is the new normal. Others say this isn’t really us. I’m not sure about that anymore. Mitch McConnell is willing to let it become him. Orrin Hatch gladly accepted Trump’s endorsement yesterday, hours after Trump endorsed the pedophile. The ball is in Alabama’s court. Is this Alabama?

To Democrats, Independents, and anyone left in that state with a conscience, I’ll repeat Trump’s words. On election day, “go get ’em.”