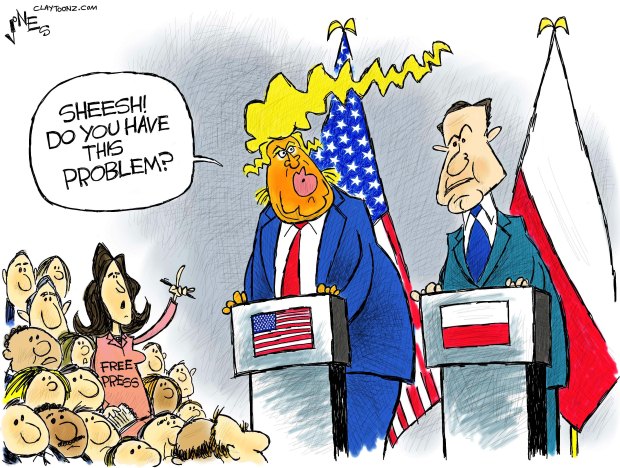 You know that oath the president takes upon assuming office? It’s when the incoming president swears to defend and protect the United States. Yeah, that one. Donald Trump mouthed the words at his inauguration but he’s not defending or protecting our nation.

Trump chose to start his second presidential trip to Europe in Poland, as they have a president who is from the far right, promotes nationalism, and is working to oppress freedom in his country.

During a press conference with Polish President Andrzej Duda, the man who occupies the position that was formerly viewed as the leader of the free world, attacked his own nation.

While on foreign soil, Trump attacked American intelligence. He said Russia probably hacked our election, along with a lot of other people and other nations. In Trump’s mind, there was an international hootenanny attacking our Democratic process.

He attacked President Obama. Though he’s not sure Russia attacked our Democracy, he blamed Obama for not doing anything about it, which is a lie. Maybe he didn’t do enough, but he did act. In comparison to Trump, he’s done a lot more which starts with acknowledging Russia attacked our election.

Then, the guy who is supposed to promote American freedom to the rest of the world, attacked press freedom. He continued to describe the American media as “fake news.”

Trump only took two questions. The first was from The Daily Mail’s David Martosko, a guy who was once considered the front-runner for the administration’s communications director position. He used the friendly question from a friendly source to continue his war on CNN and the rest of the American press.

He declared that CNN has “been fake news for a long time. They’ve been covering me in a very, very dishonest way.” He called NBC “equally as bad, despite the fact that I made them a fortune with The Apprentice, but they forgot that.” How dare NBC disregard the fortune Trump made for them with his crappy reality show and allow their news division to actually do their job, which is asking questions and reporting the news.

In Trump’s mind, those who are not fake is Fox News, the National Enquirer, and InfoWars. If delivering information that’s not true makes one fake, does that mean Donald Trump is a fake president?

The president should be defending and promoting what Reagan called America, the “shining city on the hill.”  Trump goes out and sells us as a shitty city on a hill.

Trump is destroying our nation’s image, credibility, and stature in the world. Never in our history have we had an American president put his ego above national interest to the extent Donald Trump has.

American presidents usually encourage their counterparts to support and allow freedom of the press in their nations. Instead, Trump is giving cover to oppressive leaders who seek to limit and control what their media does.

After whining that the press has been “dishonest” with him, he asked President Duda if he had this problem. Well, not as much as he used to.

After assuming office in 2015 as a member of the Law And Justice Party (scary name), Duda signed a law allowing the government to take political control of state media outlets, resulting in claims that the government is turning public news organizations into mouthpieces for the party.

Trump may be interested in turning American news outlets into his mouthpieces, well those that aren’t filling that role already, like Fox, Breitbart, InfoWars, and The Daily Mail’s David Martosko.

Last week, South Korean President Moon Jae-in told Trump in the Oval Office “I also suffer a bit from fake news, as you do.” They laughed and giggled together over their shared hatred of the press.

Today, Trump will be meeting with Vladimir Putin. Trump and Putin may bond over their shared loathing of people who ask questions and report facts. Except in Russia, Putin doesn’t make GIFS slamming the media or tweet vulgar insults at female talk show hosts. Putin has his critics silenced….permanently.

Trump has declared the press the “enemy of the American people” and has been waging war on the press since before he took office. He’s turning off the cameras and audio for White House Briefings. The State Department has stopped doing daily briefings. On top of all this, he’s finding like-minded souls in his party.

Maine Governor Paul LePage recently suggested that he makes up stories to “mislead the press.” LePage also said, “The sooner the print press goes away, the better society will be.”

People like Putin, Duda, Moon Jae-in, Paul LePage, and Donald Trump should keep this Thomas Jefferson quote in mind: “were it left to me to decide whether we should have a government without newspapers, or newspapers without a government, I should not hesitate a moment to prefer the latter.”

That’s Jefferson’s view despite the fact that he couldn’t stand the press. He also said, “Nothing can now be believed which is seen in a newspaper.” Yet, he understood the importance of a free press and that’s you can’t have freedom of any kind without a free press.

What’s getting scary is that a lot of citizens share LePage’s view that society will be better off without the press. It’s amazing that people want to be ruled and willingly uninformed. Why would anyone be satisfied with receiving information only from the government?

Between a free press and Donald Trump, there’s only one of them that a free society can do without. Guess which one that is. I’ll give you a hint: It’s orange and white and read all over.

I want to thank everyone who has donated in the past. Your support helps me continue creating cartoons and columns with a little less stress in my life. Between competing syndicates with much larger resources, timid editors, and Trump supporters who attempt to intimidate the editors who do publish anything that criticizes their idol, it’s a challenge to make a career out of this. So your support (if you can) is appreciated. Want to help me continue to create cartoons and keep doing what I’m doing (pissing off conservatives)? Look to the right of this page and make a donation through PayPal. Every $50 donation will receive a signed print. All donations will receive my eternal gratitude.