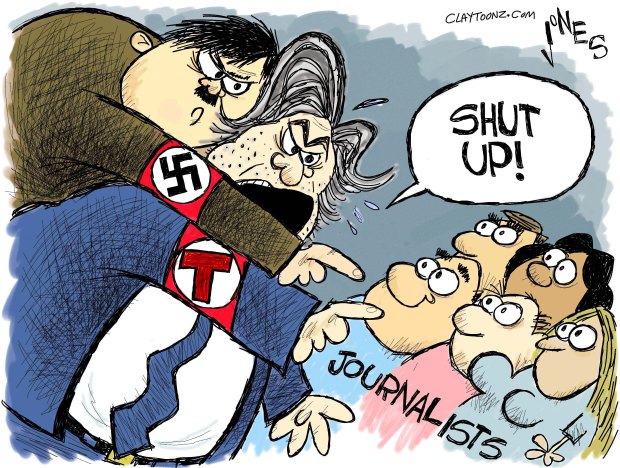 Let’s start with the second most ridiculous aspect of this. This first is the fact Donald Trump is actually president of the United States and is issuing more racist executive orders than tweets.

The second is that an alt-right white nationalist from Breitbart is the president’s chief strategist. What’s the strategy? Telling the press to shut up?

Steve Bannon, the figure from that fine journalistic institution Breitbart, sought out The New York Times to tell them that journalists need to shut up and listen for a while.

I’m not really good at shutting up when people tell me to shut up. A person I never wanna talk to can make me talk to him by telling me to shut up. I’m sure as hell not going to let some wannabe Nazi tell me what I can’t and can do.

Fascist don’t appreciate journalists doing their job. That job is reporting the truth. Fascist hate that. It drives them crazy. That’s why they try to shut them down. It’s not going to happen.

Shutting up isn’t in the cards. If anything we’re just going to get louder. Especially in this era of Trump. There’s too much at stake, and too much we can’t let them get away with.

Can you hear me now?