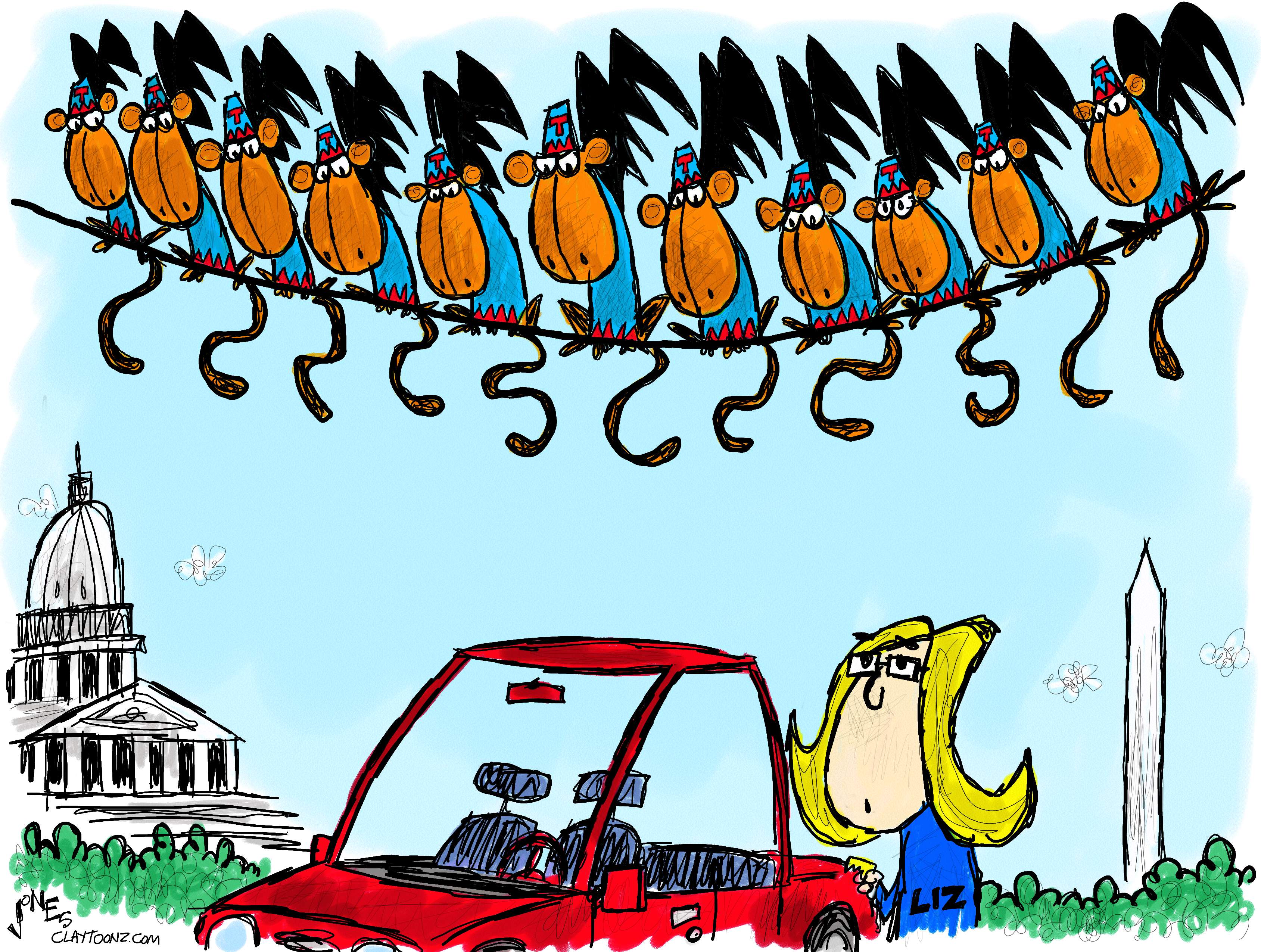 If you’re still having a public squabble and hissy fit over being banned from Facebook, you don’t deserve to be president. And that’s the topic I originally intended to cover today, but after this flying monkey idea flew into my head, I couldn’t let it go.

Liz Cheney is most likely going to lose her leadership position in the House because Donald Trump has sent his flying monkeys to destroy her. Accidentally speaking on a hot mic, Minority Leader Kevin McCarthy made it clear he wants her gone. If he wants her gone, she’s gone. And all of this is because she won’t support the “Big Lie” that the election was stolen from Trump or the talking point he’s not responsible for all the MAGA terrorists attacking the Capitol.

While Liz Cheney won’t goosestep with her cult, er…party regarding the Big Lie and its support of white nationalist terrorism, she is in lockstep with them on virtually every other issue.

Her party doesn’t have a problem that she opposes same-sex marriage, which she does despite having a lesbian sister.

Her party doesn’t have an issue that she wants the grey wolf taken off the endangered species list. She also opposed the grizzly bear being returned to the Endangered Special Act, saying it wasn’t based on “science or facts.” She favors murdering endangered animals and raping national parks for energy companies.

She joined her party in accusing FBI agent Peter Strzok of planning a “coup” against then-candidate Trump in 2016. While she voted to impeach Trump in 2020, she voted against the first one despite him being guilty of asking a foreign nation to meddle and help his reelection.

Liz Cheney was more than fine with Trump’s family-separation policy at the border. She never spoke out against parents losing their children, babies being thrown into detention centers, or children being forced to go to court alone to defend themselves. She loves Donald Trump’s racist border wall.

She never questioned Donald Trump’s grifting of our government. She never went after him when he chose Putin over U.S. Intelligence.

When Turkey invaded Kurdish territory in Syria attacking our allies after Trump pulled U.S. troops out of the area, Cheney blamed the invasion on Democrats’ impeachment of Trump.

Cheney called for the Trump Justice Department to investigate foreign meddling by Russia and China to influence, not the 2016 presidential election, but environmental groups like the Sierra Club, Sea Change, and the National Resources Defense Counsil.

Trump might be angry at her, but she supported Donald Trump giving himself a huge tax cut. She opposes corporations paying more in taxes…or in most cases, any taxes.

And while she opposes the conspiracy theories that Donald Trump won the 2020 election, she has supported the conspiracy theories that President Barack Obama was born in Kenya. She once gave the keynote address at a dinner hosted by the Center for Security Policy, which is a conspiracy group that’s been labeled as a hate group, and is led by Frank Gaffney, who once compared Muslims to termites. Cheney never criticized him for comparing human beings to termites.

As the flying monkeys swarm over Liz Cheney, keep in mind…she’s a flying monkey too. She just pissed off the Wicked Witch.