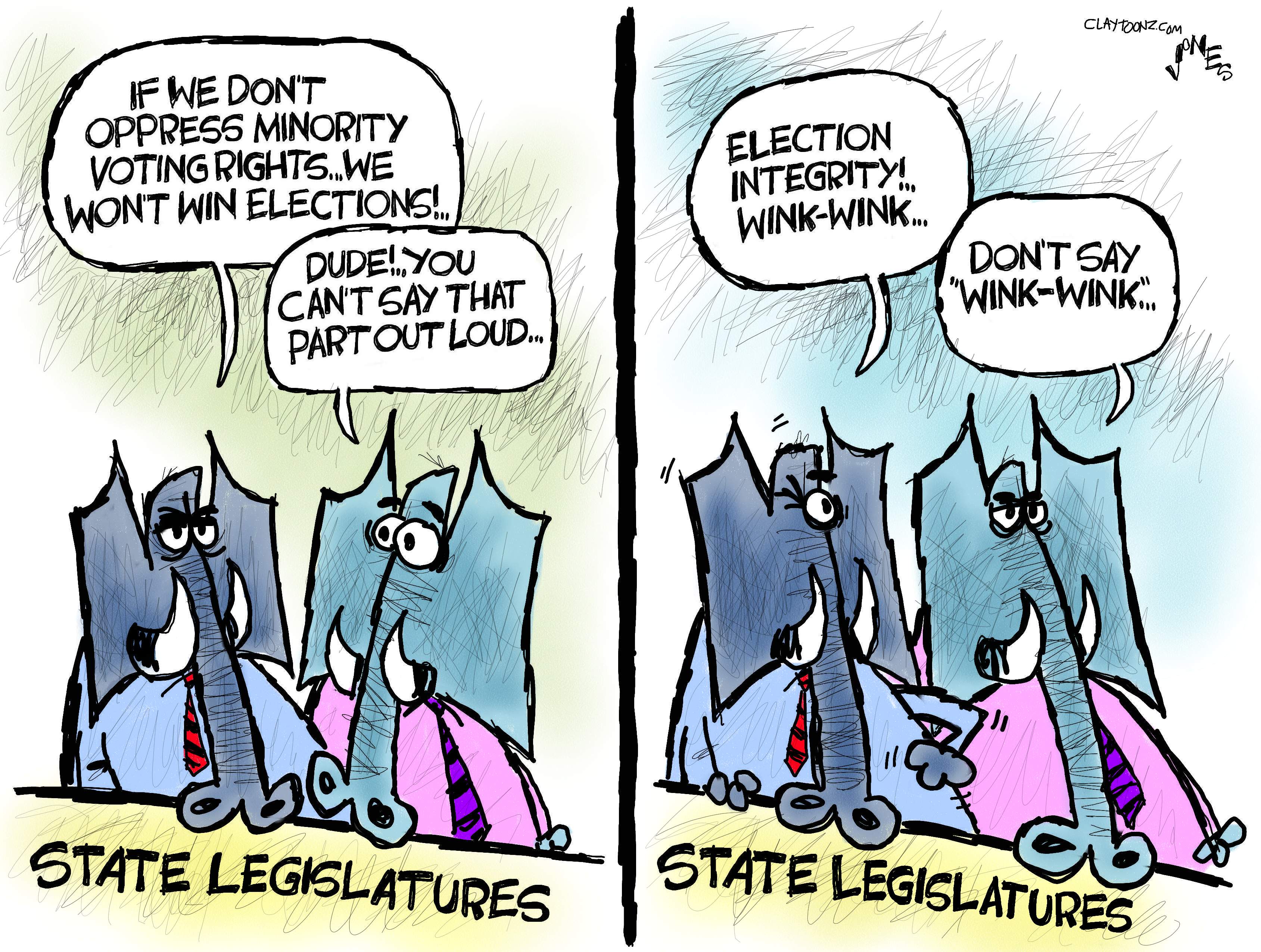 Currently, there are 43 states that are considering 253 bills that will change laws affecting how people can vote.

Did you notice one word repeated a lot in the last paragraph? That word was “limit.” So, why so much limiting across the country? Is it because of widespread voter fraud, illegals voting, shady ballots, defective voting machines, Hugo Chavez’s ghost stealing the election from Donald Trump for Joe Biden? Nope. None of those things happened.

Republicans argue we have to change voter laws because the public has lost confidence in the voting system, even though there was no widespread voter fraud in the 2020 election. Republicans argue we have to restore “election integrity.” Restore “election integrity”? Where did it go? If no laws were broken, then why are Republicans trying to change them in 43 states? Why did the public lose confidence in the system?

Republicans want to change voter laws that weren’t broken and because voters lost confidence in the system after they spent months telling them to lose confidence in the system. Keep in mind, this is the same party that invaded the wrong country that might have had weapons of mass destruction that didn’t and eventually costing us over $2 trillion. I think there should 65% of Republicans who realize that 99% of everything Republicans say is total and complete bullshit.

Why do they really want to change the system? Because they lost. My, that does sound simplistic, right? We’re talking about Republicans. Everything is simplistic.

The big lie that the election was stolen is based in racism. The argument is that fraudulent ballots came from black voting precincts. Donald Trump used this racist lie to send racist terrorists to attack Congress, where even a few racist members there encouraged and helped coordinate the attack. Republicans didn’t hide that very well.

During a hearing at the Supreme Court, a lawyer for Arizona literally told Justice (sic) Amy Coney Barrett that they need to change the laws or Republicans won’t win.

Lindsey Graham can’t shut up about it. Senator Lindsey Graham, who called Georgia officials to try to overturn the election for Trump, told Fox News on November 8, “Mail-in balloting is a nightmare for us.” He said if they don’t change the laws, “We’re never going to win again presidentially.” In case nobody was listening, he returned to Fox News the very next day and said, “If we don’t do something about voting by mail, we’re going to lose the ability to elect a Republican in this country.”

It comes down to this: The more people who vote, the less chance Republicans have to win.

The fact is, the majority of Americans do not vote Republican anymore. Donald Trump lost the popular vote TWICE. If Republicans would actually work on policies that help the majority of Americans (not just billionaires) instead of promoting policies that most Americans want, or maybe not politicizing a virus that kills over 527,000 people, or not sending white supremacist terrorists to attack the government, maybe they would win more elections.

Republicans failed at overturning a free and fair election they lost, so now they want to change the rules.

Republicans would rather restrict minority voting rights than win legitimately. They tried to overturn an election they lost with 60 court cases. They lost the election 60 more times. Lindsey Graham, a United States Senator from South Carolina, called Georgia to get them to overturn their state election. Donald Trump called Georgia and told the Secretary of State to “find me the votes.” He invited state legislators to the White House to strong-arm them to overturn the election. He had lawyers tell lies about the “stolen election.” Members of Congress attempted to stop the certification required by the United States Constitution. Trump and members of Congress sent terrorists to engage in a bloody coup attempt. Trump supporters killed cops in an attempt to steal an election.

Republicans’ main argument is that black and brown people voting can’t be trusted and it has to be fraudulent when they vote. This argument is based on nothing. This is another grab, like gerrymandering, where Republicans don’t want voters to pick who represents them, but allow Republicans to select who can vote for them.