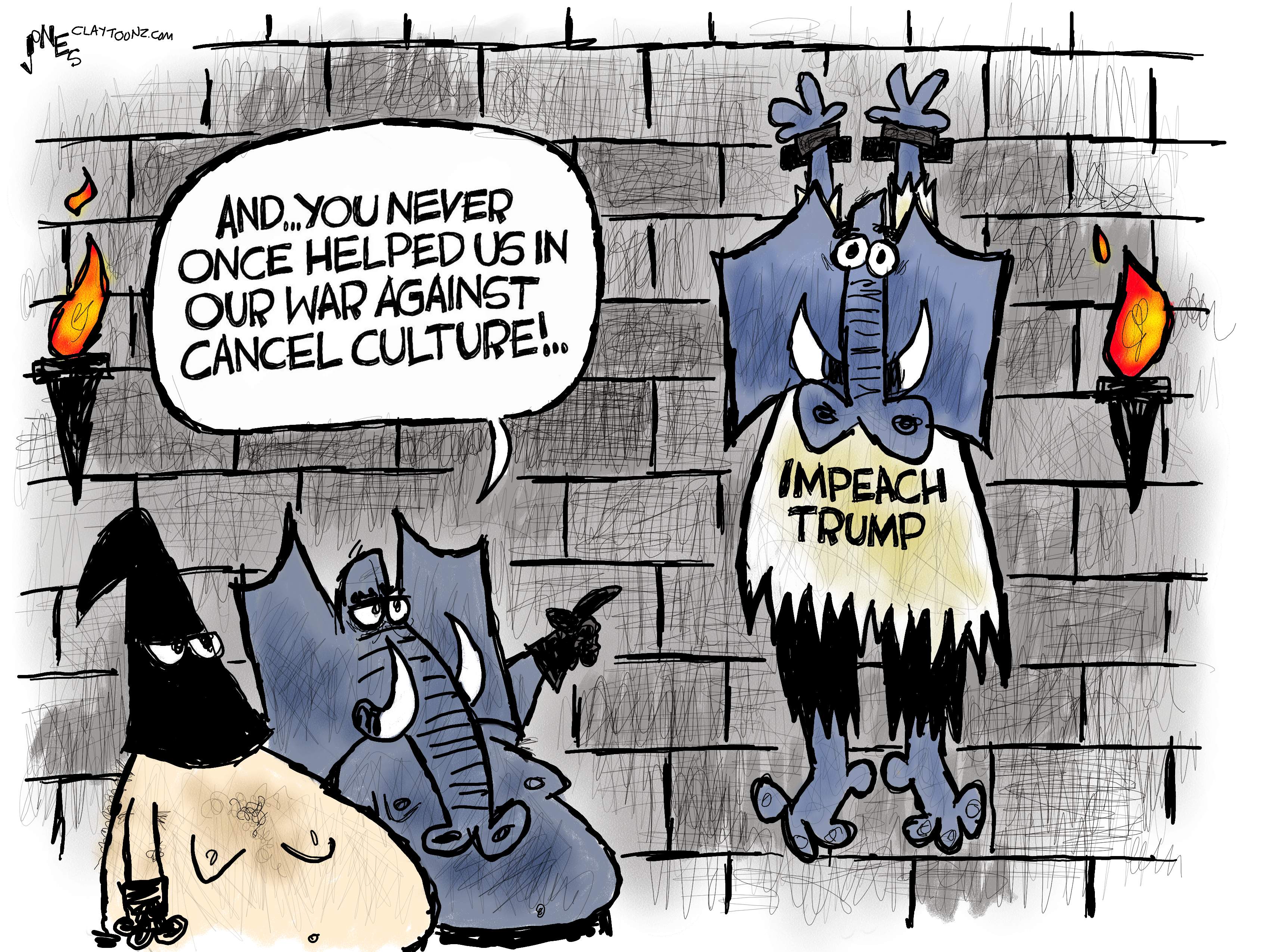 Republicans must think they have a free pass with hypocrisy.

Also, I don’t recall President Obama ever showing off his signature on executive orders the way Donald Trump did as though he had just figured out how to write his own name. And from looking at his signature, I’m not sure he ever did.

Remember when Republicans hated on Obama for playing golf? I think there were a thousand political cartoons from right-wing troglodyte cartoonists on it. How many cartoons did they draw about Donald Trump playing golf? Zero. For the sake of comparison, let’s compare. According to Golf News Net, in case you’re a Republican, is a website about golf, President Obama played 333 games. Donald Trump, according to Statista.com, in case you’re a Republican, is a website about statistics, he played golf 285 times. Wow! President Obama played more golf than Trump. Oh yeah. President Obama served two terms and Donald Trump only one because he lost his reelection to President Joe Biden.

Another point on this is that when President Obama played golf, it was usually on a federal course which means it was at minimal cost to taxpayers. When Donald Trump played golf, each and every time it was at one of his resorts, which means we paid Donald Trump to play golf. His fans, cultists, love to point out that Trump donated his salary. But we paid him more than his salary to play golf. It’s estimated his golfing costs us $142 million. Most of that went directly into Donald Trump’s pocket. Which is another example of Republican hypocrisy.

They scream about the “deep state” and corruption yet ignore that Donald Trump grifted taxpayers at his resorts and hotels.

But it takes a special skill to whine about “cancel culture” while calling people “snowflakes.”

Republicans have a new term and it’s “cancel culture.” Anytime a Republican is told, “Sorry, we don’t want to hear any of your racism today,” they start screaming, “Cancel culture!”

They scream and yell that it’s censorship when they’re not allowed to express their “conservative” viewpoints on non-government platforms like Twitter, Instagram, and Facebook. But I haven’t heard of any Republican being kicked off Twitter for talking about conservative issues like the flat tax, or decreasing government regulations, or stripping away the inheritance tax so trust-fund babies can finally catch a break. No. I only hear about them being kicked off for spreading conspiracy theories, racism, and organizing and promoting white nationalist terrorism.

Actress Gina Carano was fired by Lucasfilm and Disney for comparing the criticism Republicans receive to the way Jews were treated by the Nazis. Gina would have an excellent point if all the Nazis did was talk bad about about Jews.

Trump cultists used the term when Donald Trump was kicked off Twitter permanently claiming his viewpoints were being discriminated against, ignoring the fact he used the platform to help instigate a terrorist attack on the United States government.

And now, the Cancel Culture Club is engaging in cancel culture within their own ranks. Republicans are censuring Republicans for acting like Republicans.

You see, kids, once upon a time the Republican Party was a party of issues and not one that worshipped a cult of stupid racist moronic personality. Today, the party is a cult. It’s totally built around one man. One very stupid, moronic, racist man.

Senator Lindsey Graham, who once said Donald Trump would destroy the party, has proven his point by stating the future of the party is Lara Trump. Who? That’s one of them gold diggers who married a Trump spawn. Wait until the entire organization is auctioned off in legal and criminal settlements. What are Lara’s qualifications for the United States Senate? She did marry the dumbest Trump which probably still makes her smarter than Lindsey Graham.

Lindsey Graham, who once called Donald Trump a “jackass” and a “kook,” said the “MAGA movement must continue.” Really? Donald Trump was an incumbent who lost reelection and you want that “movement” to continue? I predict if the “MAGA movement” continues, it’ll only make states trending blue trend faster. Say goodbye to Georgia, Arizona, and possibly even North Carolina. Democrats will eventually get Texas in that deal.

Congressthingperson and Qanon follower, Marjorie Taylor Greene, said that the Republican Party “belongs to Donald Trump and no one else.” She said, “It’s his party.” And he can cry if he wants to.

The Republican Party, the warriors against cancel culture because they believe everybody’s speech should be free, independent, and protected, is now cancel culturing out its own people for exercising free speech and independence. How day they stray from the Church of Trump.

After Donald Trump lost the to Joe Biden, the Arizona GOP censured Cindy McCain and former Senator Jeff Flake for endorsing Biden. They also censured their own Republican governor for working to combat the coronavirus instead of engaging in fear mongering and politicization of the pandemic.

After last Saturday’s vote in the Senate Trial that saw seven Republicans vote to convict Donald Trump, those seven are now being punished by the Republican Party. How dare they try to make someone responsible for inciting a terrorist attack. How dare they leave the Church of MAGA.

The Republicans in Pennsylvania censured Senator Pat Toomey for his vote.

The Republicans in my home state of Louisiana didn’t wait long in censuring Senator Bill Cassidy. They issued their proclamation the same day at the Senate vote. Cassidy replied, “Our Constitution and our country is more important than any one person. I voted to convict President Trump because he is guilty.”

Republicans in Utah are passing a petition around that states Senator Mitt Romney, “appears to be an agent for the Establishment Deep State” and “misrepresented himself as a Republican” during his 2018 campaign. Even the state party realizes that is nuts and they’re backing off a censure, but still…a lot of GOP cultists in Utah are pissed…and not just because they have to live in Utah.

Republicans in Maine have told their members “to be prepared for an emergency state committee meeting in the near future” over Senator Susan Collins’ vote to convict Trump.

And in Nebraska, Senator Ben Sasse has basically said to “Bring it on.” Sasse said, “You are welcome to censure me.” He then told them, “But let’s be clear about why this is happening. It’s because I still believe, as you used to, that politics isn’t about the weird worship of one dude.”

In Alaska, Senator Lisa Murkowski’s vote to convict may lure a challenge from…wait for it…Sarah Palin. And if you are a liberal political cartoonist, you’re thinking right now, “Oh please, God…make this happen and I’ll never eat pork again.” Gods against eating pork, right? I don’t know. How about tentacles? If Sarah Palin runs for the Senate, I’ll never eat tentacles again! You have my word.

Illinois Congressman, Republican Adam Kinzinger, has been shunned by eleven members of his own family which I can relate to. They wrote a certified letter to his father stating the congressman was a “disappointment” to them and “to God.” They were upset over his “horrible, rude accusations” to “president (sic) Trump.” The part that reeks of similarities to my sisters said, “It is now most embarrassing to us that we are related to you.” Then, they accused him of being in the “Devils Army.’

Do you know how to tell when you’re in a cult? When you accuse others of being in the “Devils Army.”

Each of these Republicans put their career at risk in opposing Trump. Kinzinger has been at odds with Trump since 2015, even receiving a message from Donald that he should go “fuck himself,” which makes me jealous. I wish I had a “go fuck yourself” from a Trump. But the party should appreciate and value members who are this brave. Instead, the party caves into fear and cult worship.

Do you know how to tell if you’re a cult? It’s when you seek to destroy those who disagree with your leader, the Dear Leader in this case. The Republican Party is behaving like the Workers’ Party of Korea.

Cassidy says our nation and Constitution are more important than just one person. Sasse says the party shouldn’t be “weird worship of one dude.” But Republicans are saying no.

The Republican Party, the party that was once the party of Lincoln, Teddy Roosevelt, Ike, and Reagan, has put the weird worship of one dude before the Constitution and country. If you don’t believe me, look at what happened January 6. That was all for one weird dude.

The party of Trump that canceled Colin Kaepernick because of his opinions is now eating its own, ignoring its inconsistency. But canceling someone for his/her opinion is much different than canceling someone because s/he is racist or spreading dangerous bullshit. They also fail to see that being removed from non-government platforms and outlets is NOT censorship.

If you’re an asshole and I don’t want you in my house, that’s not cancel culture or censorship. That’s me not wanting an asshole in my house.

I have an assignment for Trump cultists who may be reading today’s blog. Read the First Amendment to the United States Constitution. After you read it, report back here in the comments section and explain how it applies to Twitter banning Donald Trump. Tell me how it applies to Disney firing Gina Carano.

There is a huge difference in all these “cancellations.” Gina Carano was fired for saying stupid insensitive shit, comparing being criticized to the Holocaust. Donald Trump was banned for starting riots. Cartoonist Ben Garrison was kicked off Twitter for sharing debunked racist conspiracy theories. Republicans are canceling Republicans for trying to make someone accountable for his actions. These Republicans are being censured, which is a punishment without any consequence, for not being sufficiently sycophantic.

And if the Republican Party is just going to be a cult to the “weird worship of one dude,” we need to cancel Republican culture.