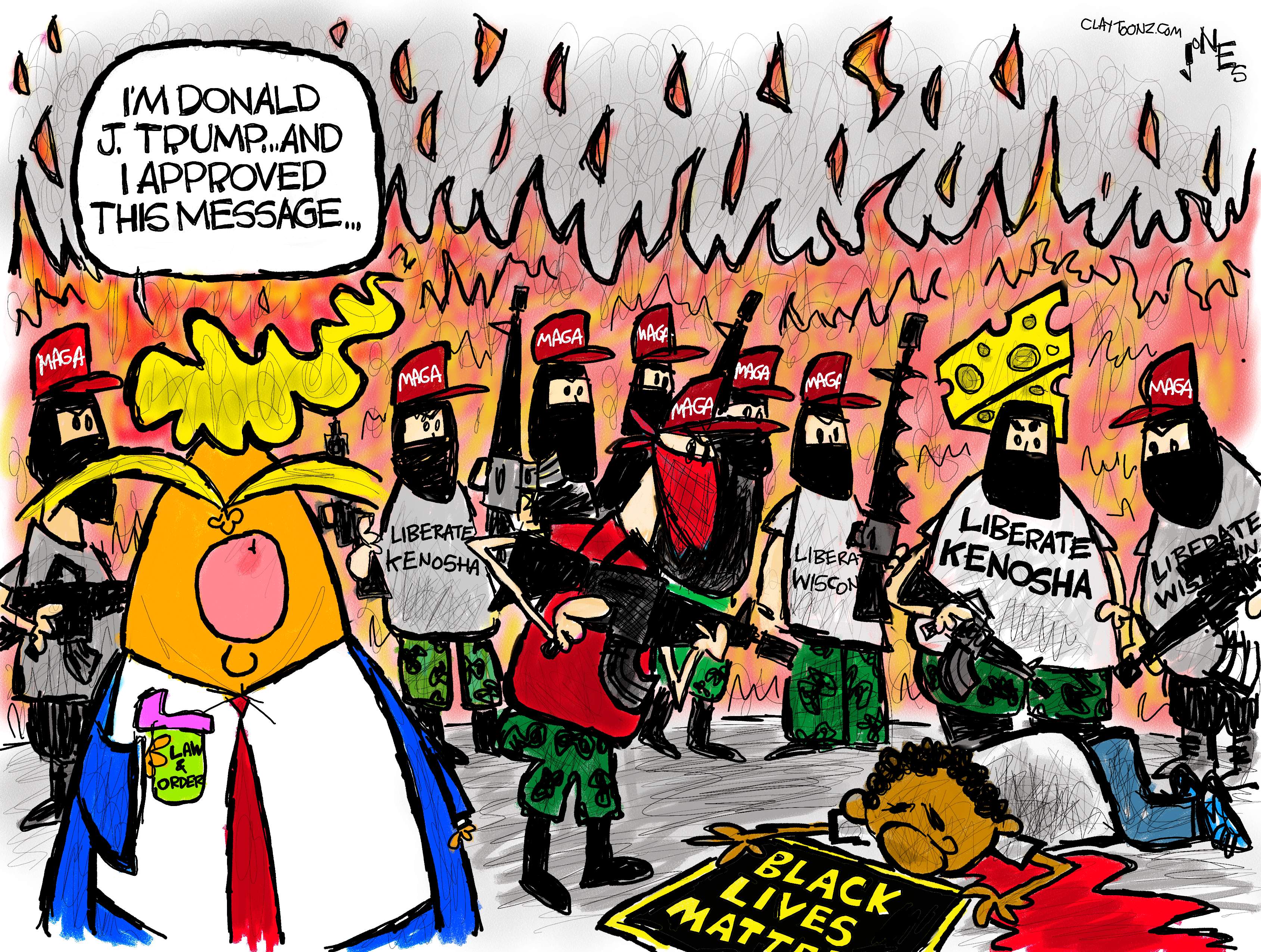 With a cult following as stupid, racist, and reactionary as Donald Trump’s, it’s very dangerous when he encourages division and violence. Donald Trump telegraphs his people to incite violence and other times, he’s not saying it clear.

For the past few days, there have been protests in Kenosha. Yes, there has been violence and destruction. Now, inject white gun-toting militia men posing as vigilantes and you have a recipe for a disaster. What does this have to do with Donald Trump? Everything.

Last night during the Trump hate convention, I only heard Jacob Blake’s name once. Melania mentioned unrest in the streets but all she said about that was an acknowledgement of it.

Also from last night, armed militia men took to the streets in Kenosha, killed two people and injured at least one. There is a video of a white man running down the street with an AR-15 type weapon, who stops, turns, and starts shooting at protesters. There are reports that when he ran by cops, he put his arms in the air to surrender, and they cops ignored him and let him go. This is why there are riots.

When police apprehended George Floyd for trying to cash a counterfeit $20 bill, they killed him. When they apprehended Eric Garner for selling loose cigarettes, they killed him. They killed Breonna Taylor while she was in bed and they were looking for someone else. When they captured white shooter Dylann Roof who had just executed nine black people in a church, the cops took him to Burger King. And when they see a white man running down the street right after he had shot into a crowd of black people, they let him keep running.

Can you start to appreciate why there are calls to defund the police? Don’t you see there are different systems of treatment and justice for white and black people?

And yes, Donald Trump approves of this. He instigated what happened last night.

Last April, Donald Trump encouraged armed men to storm the state capitol building in Lansing, Michigan. He tweeted to loyal base of racists, “Liberate Michigan.” He also tried to stir up violence in other states with Democratic governors when he tweeted, “Liberate Minnesota” and “Liberate Virginia.”

During the convention, they brought out the gun-toting Missouri couple, Mark and Patricia McCloskey, who took to their lawn with weapons, she with a pistol and him with an AR-15 type weapon, to point them at black people walking on the sidewalk in front of their home. They claim they were protecting their home from the people walking down the sidewalk. The McCloskeys warned what happened to them could happen to anybody in America…..you know, any white person in America.

In addition, Donald Trump is warning if he loses, black people may move into your white suburb.

The armed goons in Kenosha weren’t protecting anything. You don’t protect property by running down the street shooting at people. Many of the armed goons aren’t protecting their homes and businesses because they’re not from Kenosha. These goons saw an opportunity to walk around with guns to overcompensate for their tiny penises, to feel good about being asshole Republicans, and maybe if they’re lucky, get to shoot some black people. And ya’ know, the cops in Kenosha just might let them get away with it. How many black men running down the street with semi-automatic weapons do you think the Kenosha police let go last night?

What’s going on in Kenosha is a result from a message of hate, fear, racism, destruction, and gun violence.