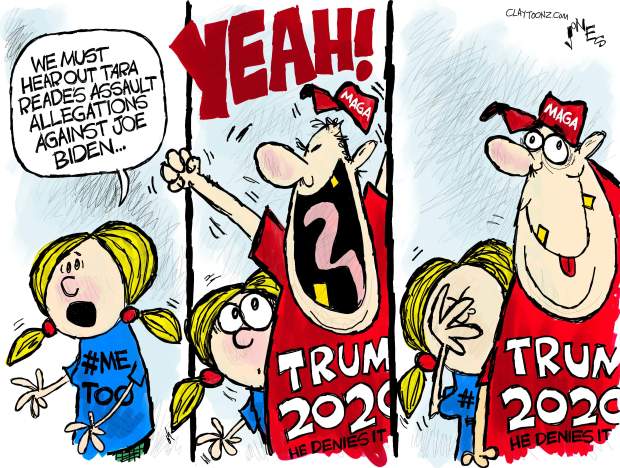 The right-wing media keeps saying Joe Biden said he “believes all women.” This morning on Morning Joe, Joe Scarborough repeated and attributed the quote to Biden. I’m not sure he actually ever said that because I can’t find it.

They are taking “he believes all women” from a comment he made during the Kavanaugh hearings.” What Joe Biden said was, “For a woman to come forward in the glaring lights of focus, nationally, you’ve got to start off with the presumption that at least the essence of what she’s talking about is real.” Let’s emphasize “you’ve got to START OFF.”

And we should start off that at least the essence of what she’s talking about is real, so you open your mind and listen to her. After that, you may not want to believe her anymore. And if you believe her, you should base that belief on the information available, not on your politics.

Tara Reade was Joe Biden’s staff when he was in the United States Senate. She has accused him of sexually assaulting her. The media has been slow to push the story but that’s starting to change. To Ms. Reade’s credit, she has refused to go on Fox News to be interviewed by Sean Hannity or any of the other out-of-control-frothing-at-the-mouth Trump cultists. But now, she is going on Fox to be interviewed by Chris Wallace. While Morning Joe went after Joe Biden during an interview with him this morning, they still haven’t invited Reade onto their show….while questioning why the media hasn’t had her on their shows.

While Reade hasn’t been on TV, the story has. So why is there a difference in the coverage between Reade and the accusations from Christine Blassie Ford against Brett Kavanaugh?

There was a very short window to cover the accusations against Brett Kavanaugh before he would be confirmed to sit on the Supreme Court for the next THIRTY YEARS. We still have six months before the general election where, if he wins, Joe Biden will only be guaranteed four years. Also, there’s this pandemic that’s left over 30 million Americans unemployed and over 33,000 dead and every American has been under quarantine. It’s a pretty big story. As Joe Biden would say, “It’s a big fucking deal.”

Donald Trump is lying low on this, for obvious reasons, but says Joe Biden should respond to the accusations. Biden did that this morning and did a better job than Donald Trump, whose usual response is, “She wouldn’t be my first choice.”

The Trump campaign, his advocates on Fox News, and even Donald Trump Jr have taken the lead in pressing Tara Reade’s allegations. Don Jr believes Reade should be heard, but did he ever say that to his own mother who accused his father of raping her? She has since retracted that, but should he ask her about that? Maybe, he should ask his dad about “grab them by the pussy.” Maybe he should ask his dad about the affair he had with future wife number 2 while he was still married to his mother…or about the affair he had on wife number 2. I think maybe Donald Trump Jr should want to lie low on this.

While the #MeToo movement wants to hear Reade out, tit doesn’t want to enable Fox News and give Donald Trump four more years to drive this nation into the ground. As one female friend told me just this morning, “For what it’s worth, Joe Biden could steal my lunch money and punch me in the nose and I would still vote for him over Donald Trump. If I have to choose between sexual assaulters for my president, I’ll take the one who did it once in 1992 rather than our serial molester-in-chief.”

Joe Biden was not my first choice in the Democratic primary. He was around 7th or 8th and I still wouldn’t mind if he dropped out and his spot was taken by a stronger candidate…like Andrew Cuomo. But, even if Biden is guilty, I would still vote for him over Trump. There is a difference between the candidates. Joe Biden stutters and mangles sentences. Donald Trump is a serial sexual assaulter who barges in on teenage girls changing clothes and mangles the economy and the nation’s pandemic response.

Sure, let’s hear Tara Reade out. You have my ear. And even if I believe you entirely, I’m still voting for Biden over Donald Trump. I won’t be in Biden’s camp but I will vote for the lesser of two evils. I will not vote third party or refrain from voting because both acts are votes for Donald Trump.

My friend, a very strong, independent, and liberal woman is voting for Biden over Donald Trump.