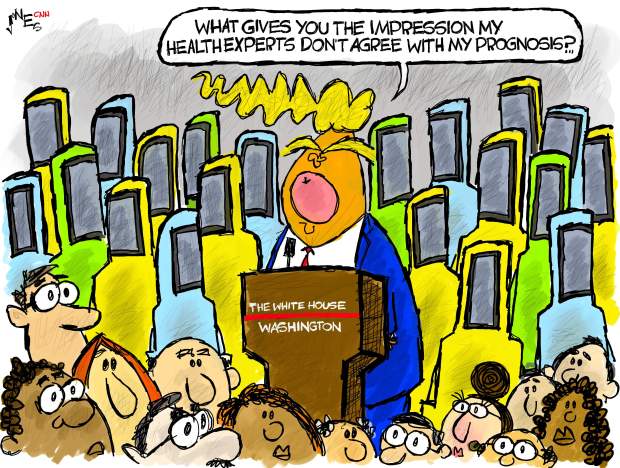 Trump and his cult are accusing the Democrats and media of politicizing the Coronavirus. What they consider politicizing is when it’s pointed out that Donald Trump doesn’t know what he’s talking about with the virus, has lied about it, and is himself politicizing it. Let me remind you, cultists, Donald Trump said the virus was a hoax and that Democrats and the media are using it against him. His idiot, racist, dumbass son who’s going for the Chia look accused Democrats of wanting people to die just so it’ll hurt his father. And, Donald Trump has touted his “border security” over the virus. That’s politicizing.

Let me point out something else. No borders have been shut down over this. No travel restrictions will protect us from this. Do you honestly believe we’re not taking in foreign products on a daily basis? In case you’re a Republican, China is a foreign country. Also, the virus can’t tell the difference between a legal or illegal immigrant.

Donald Trump boasted the virus will probably disappear in April. It won’t. He said it’s a hoax. It’s not. He said there will be a vaccine soon. There won’t be. He said nobody died. Then, somebody died…and another person died, and then another, and then another…

Donald Trump is an idiot. We know this. Even his stupid cult knows this but they love the image (I don’t know why). For every single Trump accomplishment, they have to lie and make shit up (he recovered the economy, foreign nations respect us now, he defeated ISIS, etc, stupid etc.) which means he doesn’t actually have any accomplishments. But now that there is an actual crisis, having a stupid, ignorant narcissistic racist dumbass isn’t going to cut it. Americans are dying and more will die. I know it’s hard to accept for the cult, but Donald Trump’s ego is not the national priority at this time.