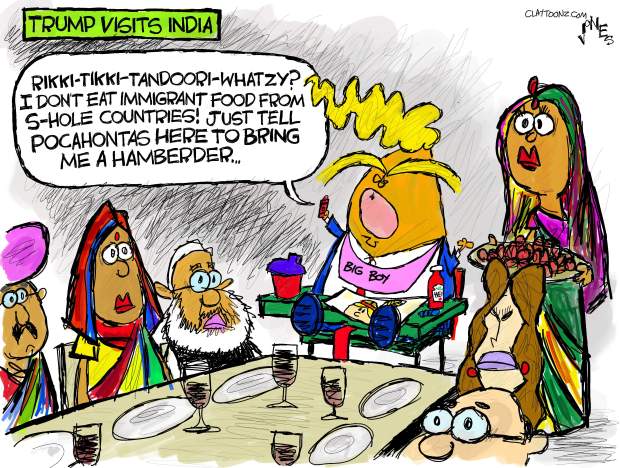 Saudi Arabia threw Trump a sword dance. China showed him the Forbidden City and told him he was the first president to ever visit. The president of Afghanistan proclaimed that Trump’s killing of al-Baghdadi was a bigger deal than Obama’s killing of Osama bin Laden. Israel named an occupied settlement after him (which means a lot of Klan babies are sharing a name with a Jewish settlement). Kim Jong Un sent him a “love letter.” And Vladimir Putin gave him the American presidency.

Indian Prime Minister Narendra Modi literally threw Donald Trump a Trump rally. Not just any Trump rally, but a Namaste Trump rally (which means “welcome”). It was also the first Trump rally where brown people outnumbered white people. It was held in the world’s largest cricket stadium and attended by over 100,000 people which is usually just the number Donald Trump makes up for his rallies (he’s already said this would be 6 to 7 million people). Unfortunately for Donald Trump, it was still a smaller crowd than Obama’s inauguration.

Trump also visited the Taj Mahal, which unlike his Atlantic City Taj Mahal casino, wasn’t financed by someone’s daddy and hasn’t been bankrupted by a man stupid enough to bankrupt casinos.

Trump actually has a high approval rating in India as does Modi. It figures as both men are Islamophobes and nationalists. Both men had high praise for each other with Trump calling Modi the “father of India.” Mahatma Gandhi who?

What’s most amazing to me is that Prime Minister Modi will shuffle 100,000 people into a packed stadium in the Indian heat to sing Trump’s praises, but he has no intention of serving the man a cheeseburger.

Cows are revered in India and the nation has the largest population of vegetarians in the world. Modi is a vegetarian and plans to serve Donald Trump nothing but vegetables. It’s been said by friends of Trump that they’ve never seen him eat a vegetable unless you count french fries from McDonald’s.

Donald Trump isn’t just a meat-eater. He’s a crap meat-eater. We’re not talking about a diet of baked chicken. We’re talking Big Macs, Quarter Pounders with cheese, meatloaf, burnt steaks with ketchup, hot dogs (it’s been said that every meal for Donald Trump is like an eight-year-old’s birthday party), and when he does eat chicken it’s KFC. If Trump’s going to eat McDonald’s during his trip, he better had smuggled it in as even the McDonald’s in that nation don’t serve cheeseburgers. That just makes me wonder, why do they even have McDonald’s? Is there an Arby’s in India (We don’t got the meats!)? Instead of burger burgers at Indian McDonald’s, they serve fried paneer cheese sandwiches and something called a “Pizza McPuff” which has crap like carrots, beans, and peas on it. That’s not a pizza goddammit. Let’s hope Modi doesn’t put a McPuff in front of Trump or there might be a McMeltdown followed by a McTantrum. Let’s hope there’s LOTS of ketchup.

I like Indian food. But I once went on a date in Richmond with a girl of Indian heritage and who took me to an Indian restaurant where she ordered something I really didn’t like (I usually go for curry). So later, I did what Donald Trump’s probably going to do as soon as he gets back from his trip. I stopped at McDonald’s on the way home and got a Big Mac. And it was the most delicious Big Mac I ever had.

But, I like a lot of food. In addition to unhealthy fast food, I like your typical Italian, Chinese, and Mexican (which most of it has been Americanized). But I also love stuff that scares a lot of Americans, like Thai, Vietnamese, sushi, and Indian food. But then again, I’m from Louisiana where we eat crawfish tails and suck their brains (but I still can’t eat a chicken McNugget). Where I would probably have a great time in India, Trump will probably be miserable.

But, I hope he opens his mind and gives everything placed before him a chance. The flavors of Indian food are delicious. It can also be spicy in addition to…well, let’s say…it can clear you out. As a friend of mine who is world-traveled described it, you get Delhi Belly. So, I really hope Donald Trump tries everything. The only side effect will probably be more tweets than usual. What else is he going to do while sitting there?

CNN did a fun story on Donald Trump’s visit to India that provided a lot of details on the food situation among other things. Fox News went after CNN on this for being petty. Oddly enough, the CNN story was more informative on Trump’s trip than the Fox News story criticizing it. As for being petty, Fox News is the same network that had a major freakout over Obama putting Dijon mustard on a burger. Fox News should hire someone to watch Fox News.

While Donald Trump may love his nationalistic, Islamophobic Indian friend Narendra Modi, he’s displayed his racism of Native Americans for the entire world to see. Also, since Trump considers African nations to be “shithole” countries, I wonder if he’s aware that only about 70% of Indian homes have access to toilets. India is a nation in serious need of literal shitholes.

India is a nation overwhelmed with feces. And now, they have Donald Trump. Did they notice?