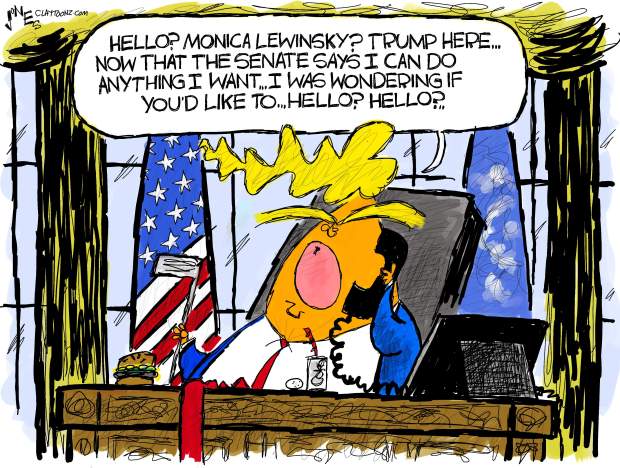 If there’s one point where you give up, it’s after you learn that no matter how much you fight, you’re going to lose. That’s the danger of this time.

The United States Senate is saying Trump is guilty. The House Managers proved their case. But none of it matters because they like Trump’s policies or the fact he gives them conservative judges. They’ve given us the same answer over the past three years as to why they accept his behavior, racism, sexism, stupidity, vile ugliness and failure as a decent human being.

If the Senate allows Trump to cheat in an election, does that mean we should just give up on there being a fair one in 2020? Are the results already in? Is the election just an empty practice like they are in autocratic states like Russia or the ones Saddam Hussein ran in Iraq?

Part of Trump’s strategy is to keep going until we give up. He’s like a three-year-old jumping on your couch. You give up trying to stop the child and accept you’ll eventually have to buy a new couch. You’ve given up on the couch. But I’m not. I’m not buying a new couch. You shouldn’t either. Disclaimer: I did give up on a couch once when I had 11 puppies. But they were cute. Donald Trump, not so much.

Now, if Donald Trump gets serviced by an intern in the Oval Office and then lies about it before a grand jury, what would the Senate say? What if he wouldn’t even admit he did anything wrong and that he’d do it again? The Senate would make frowny faces and say something about his policies being good and yay conservative judges and some other claptrap bullshit like that.

But Donald Trump doesn’t need an intern to do that because yesterday, 51 Republicans in the United States Senate did it for him.