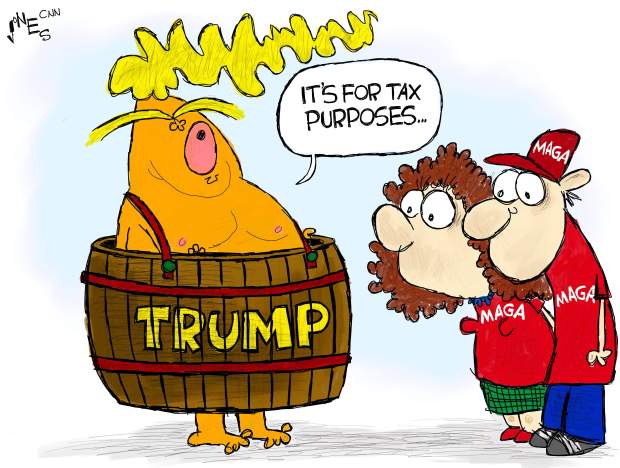 I felt a little bit chunky on Friday. It was one of those spoke-too-soon things.

Thursday, I sent CNN eight ideas. The editor replied asking if he could make the decision Friday morning because all the cartoons were too good and I was “on fire.” I had promised Amanda I was going to her house on Friday but figured I’d have everything done early in the day. So, no problem with selecting the cartoon on Friday morning. Where I spoke too soon was in promoting the upcoming cartoon and newsletter on Twitter and Facebook, as I tweeted out his “on fire” comment.

Friday morning came and my editor threw out a couple more subjects which meant the hard part wasn’t over yet. I had to keep thinking of ideas. The hard part is always over when all that’s left to do is to draw the cartoon. Thinking is hard.

The editor threw out a couple subjects at me that I wasn’t excited about. I still worked on them and I even took the project with me to Amanda’s, which was in Woodbridge (about 30 miles north of my home). Finally, the last idea I sent seemed to click. Amanda said it was her favorite of all the cartoons. In fact, it was a comment she made that made it click in my head. And then…the editor wanted to go back to one of the ideas I had sent the day before. In fact, after selecting one, we changed our minds again and selected another, which is the one you see here.

I sent about fifteen rough sketches by the time I was through. I’ve drawn three of those and I’m probably going to do one more tonight (and maybe another next week). I liked several of the ideas, and they were on different subjects.

My favorite cartoon from the batch was the monopoly/shoe cartoon (and yeah, it’s weird). The Trump Jr cartoon I drew on Saturday was the favorite for a couple other people who had seen each rough, though I wasn’t too sure about it. My second favorite, and the one I thought CNN would want was on Trump Jr AND the royal baby. But, I had already done something on the royal baby for my syndication so I felt doing that cartoon for them would have been a little repetitive, but it would have worked for CNN.

Friday was a hard day but sometimes you have to work hard, even with a cushy job like drawing cartoons. Sometimes, the one making it harder for you is yourself. I honestly believe this thing I’m doing with CNN is one of the best freelance gigs going for cartoonists today. The people I’m working with have been great and I’m not just writing that because they might read this. They really have been wonderful, professional, and easy to work with. I should also make that clear since I have to ask them to accommodate my hours again two weeks from now because I have another trip out of town.

And, sorry. I didn’t feel like writing about Trump’s fraud, taxes, lies, or corruption again. I’ve already done that more than once the previous week. You can go back and read them if that’s what you’re hungry for today.

Creative Note Thingy: I’m thinking about posting all the roughs on my Instagram page so people will have an incentive to visit and follow me there. Hint, hint.