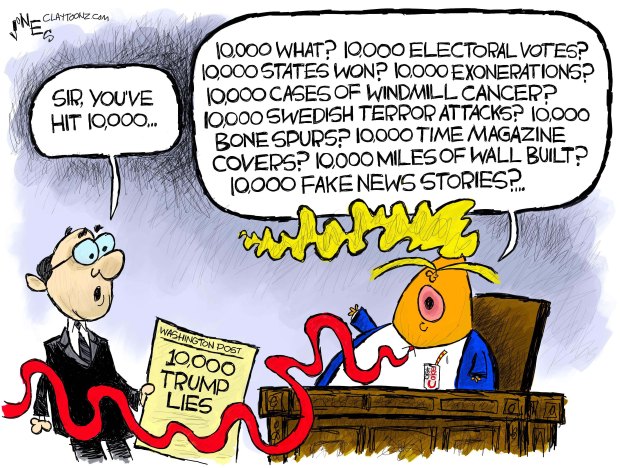 Donald Trump likes to boast that he’s accomplished more than any other American president, which is a lie. Ironically, that’s just one of the lies that helped him truly accomplish something no other president, and perhaps all other presidents combined didn’t do, and that’s tell the most lies.

Donald Trump lies. We know that. When you point that out to a Trump sycophant, their response is, “but Obama” and they pull out, “If you like your doctor, you can keep your doctor.” OK. Let’s give them that which would be one lie for Obama. Hell, let’s go ahead and use The New York Times’ tally, and give Obama 18 lies.

In case you don’t want to click the link, Obama told six lies in his first year in office and he averaged two a year after that. The Times counts 18 for Trump in his first three weeks, but they’re being nice. They didn’t count the lies he repeated. The Times even compared Trump to George W. Bush. One interesting detail is that once a lie was proven untrue, Bush and Obama would stop saying them. Trump doubles down.

The Washington Post has also counted Trump’s lies. In fact, The Post says he hit a milestone on April 16, 2019. On that day, Trump crossed the mark for 10,000 lies. The Post points out it took him 601 days to tell 5,000, but then he must have taken some Red Bulls because it only took him 226 days to tell his next 5,000. That’s quite an accomplishment and he deserves to reward himself with some hamberders.

He’ll lie about telling a lie. His lies have proven he can’t be trusted in negotiations. He agreed to a compromise on DACA and funding for his wall, which turned out to be a lie when he changed his mind. He stated he was for gun control until the NRA jumped on his orange ass, so that turned into another lie. Yesterday, he agreed with Democrats to put two trillion dollars into an infrastructure bill…but spoiler alert…that’s a lie.

Even the Mueller Report has documented his lies and states his administration told 77 lies about their dealings with Russia.

The Week published an article giving six theories on why Trump lies. The article doesn’t include my theory, which is…he’s a psychopath. But after the guy continues lying about things easily disproven, like whether it rained or not during his inauguration speech, we need to give up trying to figure out why he lies so much. What we need to figure out is why anyone still supports him.

Why do so many people not just have such little respect for the presidency, but for themselves to follow a guy who lies to them? Trump has around 90 percent approval among Republicans, which is resembling less of a political party and more of a cult. What puzzles me most is, wouldn’t your cult leader need to exhibit some sort of charm and charisma? Wouldn’t your cult leader have to at least sound good while gaslighting you and not like a whiny little Cheeto-glazed baby? Here’s the kicker for Trump supporters; when you defend a liar, you become a liar. In fact, never during the Trump era has someone been able to defend him without telling a lie. Seriously. Pay attention and you’ll catch it. They all lie.

At the rate Trump is going, he’ll pass 20,000 lies before election day. We should demand more from people who represent us. Personally, I wouldn’t hire someone who lied 26 times a day like Trump does. So when election day comes, don’t rehire Trump.