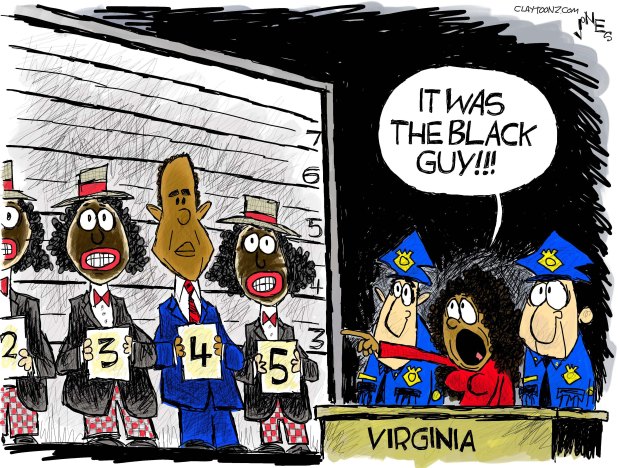 What the hell, Virginia? When did we become Mississippi? No offense, Mississippi, but yeah.

Every southern state has an ugly history when it comes to racism. There are still people in the south fighting the Civil War. My former editor of The Free Lance-Star, Ed Jones (no relation) used to tell a joke that here in Fredericksburg, the Civil War was treated like breaking news and if you mentioned the subject, some people would respond with, “what’d you hear?” Ed wasn’t a comedian.

Virginia isn’t much different from other southern states. There are still fights over the Confederate flag, Confederate statues, Confederate History Month, and Jackson-Lee Day (for the two famous Confederate generals). It’s like we need all that stuff in case someone forgets which side Virginia fought for.

Over the past few decades, Virginia has become a purple state, voting for Obama twice, Hillary over Trump in 2016, having two Democratic United State Senators, and our three top elected officials are Democratic. Though there are parts of the state that resembles the north more than the south, it’s those three top elected officials that kinda has us looking more like Florida. No offense, Florida, but yeah.

A right-wing website created by people who supported the racist and accused pedophile Roy Moore published a medical school yearbook that “supposedly” features Governor Ralph Northam in blackface standing next to a guy in a KKK robe, or he was the KKK guy standing next to a guy in blackface. We’re not entirely sure which one, yet. The governor admitted he was in the photo and apologized. A day later, he said he wasn’t in the photo and someone put it on his yearbook page by mistake. Then, he said that he did wear blackface at one time in the 1980s when he entered a Michael Jackson dance contest where he did the moonwalk. As if the jacket, single-white glove, and moonwalk wouldn’t suffice, he needed the blackface. He also said he only applied a little shoe polish to his face, as anyone who’s familiar with the process knows how hard it is to remove. So, how familiar was he with putting shoe polish to his face before the moonwalk thing?

Fortunately, we have a Lieutenant Governor, Justin Fairfax, who can fill in if Northam resigns. He’s young, smart, talented, and African-American…and currently accused of sexual assault. What the? We were very excited to ditch Northam and have Fairfax complete his term as governor. What better way to heal than replacing a racist governor with an African-American? But then this came up, which was also released by that same hater website.

Sheesh! Who’s next in line for the governorship? That’ll be the Attorney General, also a Democrat. Mark Herring. What are the odds that the two highest ranking white guys in the state would have worn blackface at some point in their youth? Apparently, pretty damn good. Herring has come out and stated that he too once wore blackface at a party.

Herring called for the governor to resign before confessing to the Legislative Black Caucus, that at one time, just the once, in 1980, he went to a costume party as rapper Kurtis Blow. Have you ever heard of a black guy going to a party wearing whiteface, so he could be Vanilla Ice? Of course not, partly because Vanilla Ice sucks…but you’ve never heard it being done with the Beastie Boys either, right? The Beastie Boys rule, by the way.

One state legislature who was at Herring’s confessional said that the attorney general wiped tears from his cheek and that legislators also cried. Of course, they cried. That’s because the next in line is a Republican, Kirk Cox, the current Speaker of the House. Do you know how Cox became Speaker? He became Speaker by winning a coin toss. Seriously.

Our next governor could become governor because he won a coin toss, as Democrats basically tied with Republicans for control of the House, so for that one decided House race, they flipped a coin.

Damn. We are becoming Florida.

If we have to keep flipping through all these guys to where it eventually comes down to me, I’ll be disqualified too. Once, in my youth, I too pained my face (technically, my older sister painted my face). In the sixth grade, I went to a school party as Peter Criss of Kiss, the Catman. As we’ve all learned by now, he was a terrible drummer, a coke-snorting alcoholic, and he didn’t really write “Beth.” Also, while wearing the makeup, a lot of people thought I was a girl.

I was pretty but I can’t be governor. I should’ve gone as Ace.