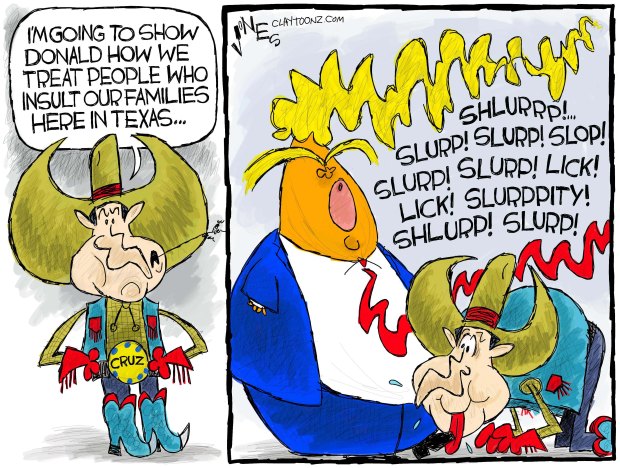 Ted Cruz may NOT be the Zodiac Killer, but he will throw his family under the bus for a cheap political payoff.

He didn’t just throw his family under the bus. He sacrificed his pride, dignity, and anything that remotely resembled principles. But, that’s kinda par for the course for people who support Donald Trump.

But, when it comes to standing firm on the ground where you make a stand, Ted has legs of Jell-O.

Donald Trump accused Cruz’s father of being an accomplice to the murder of President John F. Kennedy. He tweeted pictures of Melania next to Cruz’s wife, Heidi, as though he was running for prom king and having a prettier wife should be important to voters. He gave Ted the nickname “Lying Ted.” Cruz responded by calling Trump a “sniveling coward” and a pathological liar.

Both candidates were right. Both men are liars and cowards. But the bigger coward soon started campaigning for Trump and joined the “Trump Train.” Last night, Trump campaigned for Cruz by holding one of his hate rallies in Texas; where Cruz shouldn’t need any help to win his re-election bid.

Unfortunately for Cruz, his opponent isn’t just a warm-blooded human being with a pulse, he’s Beto O’Rourke. Where anyone is more likable than Cruz, and even the Zodiac Killer is probably upset with the comparison, Beto is extremely likable and has amassed a huge following as well as a large war chest of campaign dollars. Ted may win in red Texas, but he’s in a fight.

The question for Texans is; why would you send Cruz back to Washington? In his first term, he was single-handedly responsible for shutting down the government. He put the concerns of Texans on the back burner to run for president. He became the most unpopular guy in the Senate, where even former House Majority Leader John Boehner said he was a “miserable son of a bitch” and “Lucifer in the flesh,” which made Lucifer, and miserable sons of bitches very unhappy with the comparisons.

Donald Trump has increased his lies to new levels of absurdity. Democrats are paying for the caravan, there are Middle Easterners in the caravan, Democrats will give illegal immigrants new cars, there are riots over sanctuary cities in California, he’s going to pass a tax cut while Congress is out of sessions, etc. But, yesterday he may have told the most unbelievable lie yet. Trump said Cruz is no longer “Lying Ted” and is now “Beautiful Ted.” What? As one comedian recently said (I forget who), “Ted Cruz is what baseball thinks about when it wants to delay orgasm.”

Ted Cruz isn’t the only person putting the cult of stupid personality before principles, dignity, and pride. Texans voting for Cruz are doing the same thing. Why would anyone, especially a Texan, vote for a guy who asks the guy who insulted his family to come to his state and campaign for him?

If Texans want a Senator who will put their interests first and represent their state with pride, they’ll vote for Beto. If they want to vote for a sniveling coward who’s also a spineless worm, they’ll vote for Ted Cruz.