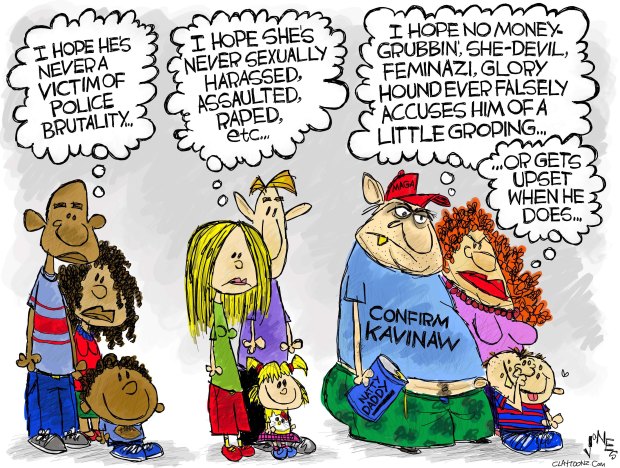 I believe her because she is a psychologist and knows how the brain works. I do not believe she would make her story public, expose herself and her family to be publicly and privately attacked by Trump trolls and death threats if she wasn’t absolutely sure that it was Brett Kavanaugh who attacked her.

A lot of people have tossed out the theory that she has confused Kavanaugh and Mark Judge for other people. To believe that you have to believe she’s confusing two people who hung out together. I can’t believe she would do that. She is sure of who attacked her. You can’t say she was attacked but probably by someone else, and that you believe her and Kavanaugh. One of them is lying and it’s not Blasey Ford.

Mostly, I believe her because I can relate to the way she describes what she remembers and what she can’t. I can relate to why she didn’t tell anyone. That’s because I have my own assault story. It’s a story I’ve only told a few people, and just in the last few years despite it happened when I was 16-years-old.

I have been told that more men should speak out. I am inspired by Dr. Blasey Ford’s courage and bravery to speak of her ordeal in public, basically on every television in America. I’m also inspired by the courage of Ana Maria Archila and Maria Gallagher who confronted Senator Jeff Flake in the elevator.

I don’t think my experience is nearly as horrifying and traumatizing as Blasey Ford’s. I don’t think it messed me up for life. I know so many others who have experienced much worse than I did. My experience lasted for only a few seconds. I think I was very fortunate it wasn’t worse because it had the potential to be.

Coincidentally enough, my attack happened in 1982, the same year as Blasey Ford’s. It may have even happened in the same week. I do know that mine was on a Saturday. How do I remember that? That part’s simple.

In 1982, I had my first job as a busboy. I was spending the summer with my older sister and her husband in Natchez, Mississippi. They were expecting their second baby and had recently lost their first. My mom thought it would be good for Robin my sister, if she had me nearby for a while after that loss, and that having my first job would be good for me. She may have also wanted me out of the house for awhile where we lived in Georgia.

My brother-in-law’s mom was able to get me a job at a restaurant called The Post House. Being that I had no experience, I only worked lunch shifts. Though it was something you could train a monkey to do, it was hard work. The restaurant didn’t want me working on a Saturday night because the idea was to clear tables and reset them as fast as we could so you could get as many people seated as possible. Everyone made more money that way. I was not very fast yet. But, one Saturday night, the regular busboy for that shift quit. After calling everyone else with no replies, they called me in as a last resort.

Nobody was home to give me a ride to work, so I asked a neighbor and friend, who was probably in his mid 30s. He was a friend to me, my sister, and just about the entire apartment complex where we lived. He even offered to pick me up when work was over, which would be extremely late. I said the attack happened on a Saturday night, but technically, it was a Sunday morning.

I was euphoric when the night ended. At 16, it was a huge personal accomplishment to be able to keep up, though it ran me ragged. The management, kitchen staff, and waitresses all complimented me and even shared their tips. Why I might have made twenty dollars that night. When the shift was over, I called the friend.

It’s funny that I can recall the apartment, what he said and what I replied with, but I can’t remember his name, and I don’t want to. It’s not a repressed memory but more of one I haven’t spent a lot of time thinking about.

The friend is someone who did creep me out. But, I kept going back to hang out at his apartment, usually with friends or my sister and her husband, Dana. I had bad vibes while liking the friend too, and I told myself I was being silly. But I did go back, but not after that night.

I don’t remember how long I hung out with him that night. I don’t think it was very long as I was tired. I wanted to unwind before I went to sleep, and I think after one Coke and Ding Dong I was ready to go home. I made it as far as the balcony before he stopped me. He lived on the second floor in one of the buildings of the complex. It was a U-shaped complex. He lived in the center and we lived on the left of it.

Just as I stepped on the balcony he asked me to wait. He was a big guy, obese even. He was easily 300 pounds, maybe 400. I might have weighed 75 totally wet. I was a very skinny kid. As I was trying to leave, he placed one hand on my rear and the other on my penis. He didn’t squeeze or grab, but there was pressure as he had a hold of me. That’s when he whispered. We were the only ones there and it had to be later than 2:00 AM. Maybe he was kind of afraid to ask for what he wanted, or he was being cautious or thought it was safer, I don’t know. But he leaned down (he was also taller than me) and whispered. He said, “Do you ever get it sucked?” I was frozen in fear. I was terrorized. I replied, “What?” even though I heard him clearly. I didn’t whisper. He repeated, “Do you ever get it sucked?” still whispering. I said, “No. I’m not into that,” which was kind of a weird term for me to use at that time and age because I don’t think I had ever said “I’m not into that” in my entire life. I thought later how it was a cool way to respond, and I wasn’t that cool. After I said, “I’m not into that,” he repeated what I said, “you’re not into that.” I said, “No. I’m not into that.” And then, he released his hands. I don’t remember what he said after that, and he may have apologized. He may have just said something about it not being a big deal. I don’t really recall. He might have felt bad about it. What I do recall is that I left so quickly from that second-story apartment that I didn’t take the stairs. No pun intended, I slid down a pole. There were poles that were holding up the sidewalk/balcony, and I just slid down it as it was right there and the stairs weren’t close at all. I just wanted out of there.

When I got home, my brother-in-law was still awake. I had left them a note about me working that night. He asked about that and if I got home OK. We talked for a few minutes while watching TV. He was probably smoking weed. But, I didn’t tell him what happened. I remember being afraid that he would notice how shaken I was. But, he didn’t that I’m aware of. But then again, he was a weed smoker. I kept thinking of the exact words in my exchange with the friend. “Do you ever get it sucked?” What?” “Do you ever get it sucked?” “I’m not into that.” You’re not into that?” Maybe because those words recycled over and over in my head is why I can’t remember what was said after.

I never went back and I never told anyone. Funny thing, nobody asked me why I wasn’t going back. It’s like no one had noticed. I don’t remember how long after that, whether it was months or the next year, but my sister told me he had to move out after being accused of something with some other teenage boys. I still didn’t tell her about my experience. I was told a few years later that he had died. I’m assuming from natural causes.

Why didn’t I tell anyone about what happened to me? I was ashamed. I felt it was my fault for putting myself in that situation. I was afraid I wouldn’t be believed or that no one would think it was a big deal, or that he was joking. I was also embarrassed because I’m a guy and I was grabbed by another guy, though I was a kid and he was a full-grown man. That stuff didn’t happen to guys, only women. Right?

I didn’t have any witnesses. I can’t tell you the date. I can’t tell you what I wore. So when people question Blasey Ford’s memory, I think it’s ridiculous. Think of a party you went to five years ago and tell me the date. You probably can’t do that. You may not even remember the exact year. Though I don’t remember the date or even his name, I remember the location, what he said, and the night of the week. I remember my fear and trembling that lasted for hours.

Now, why would I make this story up? I don’t want to tell this story. I don’t even want to think about it. Do you believe me? You should, and you should believe her. Why would she make this up? Why would she lie and ask the FBI to investigate? How can someone listen to her and say, “Eh. I’m voting for him anyway.”

I asked myself if the guy who grabbed me was up for something like Kavanaugh is, would I come forward? Would it be a responsibility of mine? Would it be in the best interest of the country? I think it would. What Blasey Ford is doing is patriotic and she’s a hero. I’m just a kid who had his wiener grabbed in 1982.

I believe Dr. Christine Blasey Ford. I know she didn’t want to tell her story to the world, but she did and she did it for us. She was attacked by Brett Kavanaugh and Mark Judge watched. You should believe her too because she’s telling the truth.