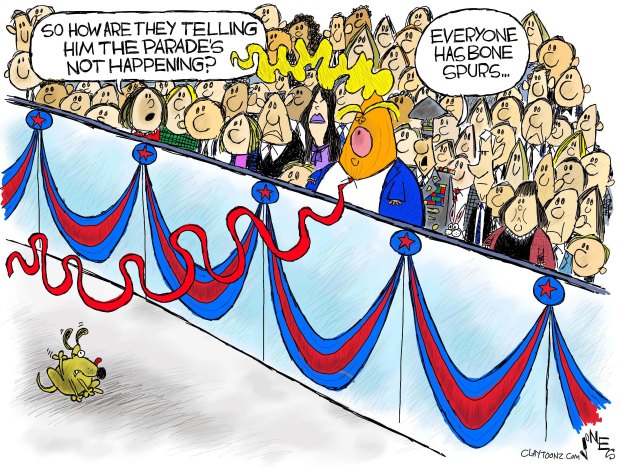 I thought Trump was supposed to be a great deal maker. After Washington, D.C. put a huge price tag on allowing him to parade tanks down Pennsylvania Avenue, you’d have thought he would have negotiated them down. At the very least he could have got Mexico to pay for it.

Trump, who got five deferments to avoid going to Vietnam, said prisoners of war aren’t heroes, and battles with Gold Star families, really wants us to know he loves the military. He’s been hankering to present a macho strong authoritarian image in the form of a military parade.

He was especially inspired by the military parade celebrating Bastille Day on a trip to Paris. Instead of a taste for tanks and rocket launchers, you’d think he would have returned with a sophisticated palate for wine and cheese. Even his taste in mistresses hasn’t improved.

Washington, D.C. was never excited about the parade and the prospect of Pennsylvania Avenue being torn to shreds by the treads on 68-ton tanks. Also, not in love with the idea of a military parade is the actual military. Why? Because it’s a waste of time, money, and totally unnecessary. But to be fair, our admirals and generals probably haven’t had their penises laughed at as much as Trump has.

The initial cost estimate was around $12 million, but after D.C. tacked on another $21 million for local expenses (which the federal government would have to reimburse), and the mayor tweeted that she “finally got thru to the reality star in the White House with the realities,” the plans were put on hold. The estimate is now at $92 million. As usual, Trump reacted calmly and with great patience and understanding. Nah, he did what Trump does best. He had a conniption fit on Twitter.

Trump accused the District of inflating the price, despite the lack of any evidence. He accused the local politicians of running the city poorly, even though the city has the highest credit rating possible and a $2 billion surplus. However, the city is majority black as are their elected government, and only four percent of their electorate voted for Trump. So, I’m sure Trump will manage to get his sycophants to blame the city and accuse them of not supporting our troops.

Why wouldn’t they accuse the city of being unpatriotic? They believe Trump is putting “America first” while engaging in treasonous behavior with Vladimir Putin. And, they’re angry at New York Governor Andrew Cuomo for daring to say America “is not great” despite that literally being a part of Trump’s campaign slogan.

Trump still hopes to have a parade in 2019, but for this year, he plans to go to a parade at Joint Base Andrews (who didn’t know they were having a parade) and to attend another in Paris, this time to commemorate Armistice Day.

The biggest bummer in all of this for Trump is that the Trump Hotel in Washington won’t be booked to capacity for out-of-town visitors to view a pointless military parade. He’ll need to schedule several more visits to his hideously garish golf resorts to bilk as much as he can out of the government, and show the city leaders in Washington how over inflating pricing is really done.

Do you think Kim Jong Un would let the mayor of Pyongyang yank him around?

Creative note: I wasn’t sure about this idea because Andy Borowitz had already done the bone spur thing. I got this idea yesterday, and then I saw a link to Borowitz’s column. I shared the link on social media while lamenting the luck. Then, it was pointed out to me that it was a repost from February. I considered it some more and since I did think of the idea myself and Borowitz isn’t a cartoonist, I decided to go with it. But, I had to think it over until about 5:00 AM this morning.

As my friend and cartoon critic Mike Peterson wrote today, “I feel sorry for American workers, but I particularly pity Andy Borowitz and the staff of the Onion, because the genuine idiocy is outpacing their ability to invent stupid things.” Oh yeah? What about us cartoonists, buddy?