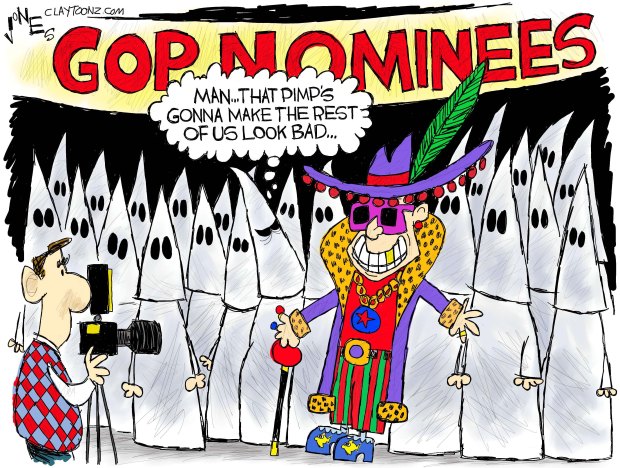 The Republican Party has turned into the Cult of Trump, and while the backbone is racism, it also attracts a fair share of crazy people.

Trump is king of the racist birther conspiracy that President Obama wasn’t born in this nation. He later stated he was (a few days before the election), but he has never apologized for it.

Trump purchased full-page ads in four New York City newspapers calling for the death penalty for the Central Park Five, despite DNA exonerating the black and Latino teenagers from Harlem of raping a jogger.

He kicked off his campaign calling Mexicans rapists and murderers. His proposed border wall with Mexico is an impossibility that’s really just red meat for his racist base (which is also a broken campaign promise, as he said Mexico will pay for it but is now demanding that Congress make you pay for it). He’s called for the surveillance of mosques. He initiated a ban on Muslims entering this nation. And today, his Justice Department is separating migrant children from their parents with a zero-tolerance party.

Donald Trump has hired the likes of white nationalists Stephen Miller and Steve Bannon, he retweets white supremacists and Nazis. He said there were “good people” among those in Charlottesville chanting “Jews will not replace us,” and “blood and soil.” He has attacked black athletes as being un-American for silently protesting police violence against blacks, and referred to them as “sons of bitches.”

Racists have been emboldened by him. Last week, Representative Steve King, a Republican from Iowa, retweeted Nazis. Other racists, Nazis, and Klansmen like David Duke, are openly praising Trump.

Corey Stewart, a guy who wraps himself in the Confederate flag and is very friendly to White Supremacists and a former chairman of Trump’s Virginia campaign, just won the GOP nomination for the United States Senate in Virginia.

While not a Republican, a very pro-Trump racist, and admitted pedophile is running for Congress in Virginia.

Now in Nevada, we have a Republican pimp. Dennis Hof is a 71-year-old Nevada brothel owner, and he defeated a three-term Republican incumbent for a seat in the State Assembly. He is a strong Trump supporter and even wrote a book titled “The Art of the Pimp.” This also proves that all the religious posturing among Republicans is just that, posturing.

It’s often been repeated, and I believe it. Not all Republicans are racists, but all racists are Republicans.