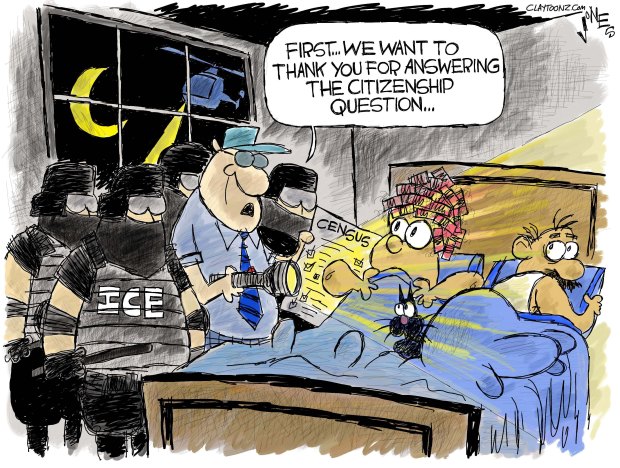 Here’s a little civics primer for you: The Constitution of the United States requires the enumeration of people in the U.S. every 10 years for the purpose of apportioning congressional representatives. It also requires that representatives be apportioned among the states “according to their respective Numbers.” Federal law requires the Secretary of Commerce to count the “population,” not citizens.

The Constitution says “persons,” not citizens or green card holders. I understand this may be difficult to comprehend for those who have only read the 2nd Amendment (and interpret it to suit their means as well), but the Constitution requires Congressional representation of people, not just citizens or voters. Children are people, and they don’t vote, yet they have Congressional representation.

The Trump administration wants a citizenship question included in the census. This is an attempt to under-count blue states, specifically California. The administration claims the question is required to enforce the Voting Rights Act, but nobody is buying it.

You may have forgotten since it’s been eight years since you’ve seen a census, but you fill it out anonymously. It’s not a voter registration. Republicans claim the citizenship question is a fight against immigrants voting illegally (which is not a widespread problem), but that’s a stupid argument. Another argument is they’re trying to determine who makes up the population where they claim there are abuses at the polls. That means check the box that you’re not a citizen so Jeff Sessions will know where to send more ICE agents.

The census is supposed to be confidential, but the Trump administration is trying to use it to scare immigrants from answering. This won’t just affect Congressional representation, but also how federal tax money and services are distributed. It will also affect the electoral college, as those votes are based on Congressional seats. Donald Trump won the Electoral College while losing the popular vote, which is also how Republican George W. Bush won in 2000.

Since the census is anonymous and Federal law states it can’t be used to punish people, does that mean we can trust Trump and his Justice Department? Sure, if you want to believe a man who promised to make a deal on DACA before reneging, and is now complaining that Democrats won’t give him money for his stupid border wall after spending two years telling us Mexico would pay for it (and is now trying to steal the money for it from the military’s budget).

It’s funny how Republicans complain about illegal votes while using several methods to suppress minority voting, from gerrymandering to voter ID laws to even closing DMVs in rural areas with black populations in Southern states.

Sarah Huckabee Sanders claims the citizenship question has been used for every census over the past several decades except for the last one. That’s a lie. It has not been used in a national census since 1950. Over a dozen states, including California and New York, are now suing the Trump administration to block this measure.

Trump has been targeting immigrants since day one of his administration, and hating minorities also warm the cockles of Jeff Sessions’ heart. California and the administration have been at war since he took office. The state has sued or joined other states’ legal actions against Trump at least 31 times. The suits have been over immigration, including deportation threats to “Dreamers” and building the border wall, Obamacare, greenhouse gas emissions, coal production, clean water, and so on.

Donald Trump is a cheater and a liar. He can’t be trusted. He’s not just using the federal government to go after brown people, but to throw red meat to his racist base. When California, New York, and other blue states take Trump to court, they’re defending America.

These lawsuits will continue until Trump is no longer in the White House. Let’s hope that’s sooner than later.