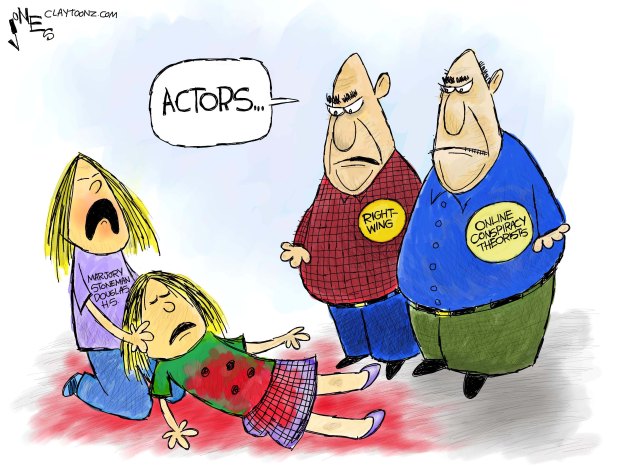 Last week I talked about how one of the joys of being liberal is that you don’t have to make stuff up to justify your beliefs.

Your run-of-the-mill Republican will inflate or decrease numbers or leave out pertinent information when making their case. Your average troglodyte conservative will make up the most horrible stuff, like Alex Jones when he claimed the Newtown shooting was a hoax.

Students from Marjory Stoneman Douglas High School in Parkland, Florida, the scene of the latest school shooting, are organizing and taking on gun control and politicians who accept money from the NRA. Other students from around the nation are joining them. All these students are either victims, potential victims, or future victims. The reason they’re scaring the living hell out of Republicans is that they’re right.

They’re also future voters who aren’t going to forget Marco Rubio refusing to stop taking money from the NRA, or his refusal to acknowledge an AR-15 is an instrument of war. It’s like he can’t call an assault rifle by its name. They also won’t forget going to the White House where Donald Trump’s proposal to end more gun violence is to introduce more guns into schools, and the fact he needed crib notes to appear empathetic.

Some Republicans are starting to bash these students. The most harmless horrible comment I read was about the students not being old enough for their brains to be fully formed. That sort of crap makes me wonder about the conservative critic’s brains, and if he even has any. Just because you were inarticulate as a child doesn’t mean these kids are too.

Other conservatives are saying these kids can’t be this organized without any help. Crazy David Clarke, the sheriff from Milwaukee, has claimed George Soros is funding and organizing these movements. Clarke doesn’t have any proof, but these people don’t need proof to post a comment on Twitter. Look at Donald Trump.

Attacking one of the survivors of Parkland, conservative Dinesh D’Souza tweeted, “This woman seems coached and also a bit deranged. Trump’s should ignore these media-manufactured theatrics. Genuine grief I can empathize with. But grief organized for the cameras—politically orchestrated grief—strikes me as phony & inauthentic.” D’Souza later apologized for the tweets, but I wonder why he ever thought, even briefly, such comments were a good idea.

Alex Jones has posted several videos on his InfoWars YouTube channel accusing David Hogg, a senior from Stoneman Douglas, of forgetting his lines during a TV interview. According to an article by Brianna Sacks of Buzzfeed, Its had nearly 10,000 views and another calling the shooting a “giant false flag” has nearly 200,000 views (the article is one of the sources where I got the info for this column).

The biggest conspiracy theory floating around out there being shared by your crazy uncle is that the students speaking out are “crisis actors” taking advantage of the shooting to push a liberal gun control agenda. Right-wing sites, such as The Gateway Pundit, are eating this up. Russian trolls are also pushing the narrative. You’ve probably already seen some of their work on Facebook. Russian troll farms don’t sleep.

The irony here is that the conservatives arguing the kids are coached and manipulated are being manipulated by right-wing sites and Russians.

I gave a primer the other day for voting which was, Putin’s choice for president is the worst choice for us. I’m going to give you another primer about political opinions.

I won’t miss you.

Update: Facebook removed the video for “bullying” and “harassing.” What the hell? I’m clay Jones, not Alex Jones. I have appealed.