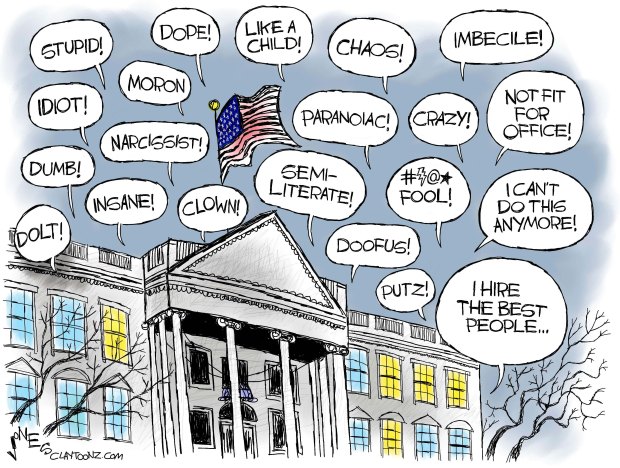 It is also a story of how paid sycophants, who shill daily on the virtues of a moron, really feel about said moron.

I’m on the ninth chapter of Fire and Fury. My review so far is, you don’t have to buy it, even though Trump not wanting you to read it really makes it tempting. The White House has sent cease-and-desist letters to the author, publisher, and even Steve Bannon. In Bannon’s case, they’re claiming he’s lying and violating a non-disclosure agreement. You’re gonna have to figure out the logic for yourself how someone is revealing confidential information with lies.

Sure, all the cool people are reading it and a hard copy is harder to find than a brand-new Harry Potter book. But there’s nothing in it you really don’t already know.

Maybe we didn’t know Trump watches three TVs at once in his room and lies in bed with cheeseburgers, but we knew the guy watched a lot of TV and eats cheeseburgers.

While we didn’t know Melania has a separate room from Trump, we already knew she doesn’t like him. Who blames her? She avoided moving to Washington for the first six months of the Trump administration. Sure, she didn’t want to change her son’s school, which Donald is not involved with, but all that was very convenient for a “trophy wife” who doesn’t really like being around her husband, rarely knows his location and quite frankly couldn’t care less. When someone like that is out of the house and leaving you alone, you just enjoy it and don’t ask questions. Who is shocked that the third wife of a billionaire who has bragged about cheating on her is really only in it for the money, and doesn’t actually like him? We only have to see Trump on TV and watch our nation get discarded like a Happy Meal container. She has to actually live with him.

While it might be surprising that Trump wanted a lock on his door, there’s no mention of access to Melania’s room, which has probably been allowed a lock along with a stack of furniture barricading the entrance. There’s also no mention if they’ve secretly replaced his Viagra with purple pills shaped like Bam-Bam. But, then again, I’m only on the ninth chapter.

Trump doesn’t know details. This also is not a real revelation after seeing the guy on the campaign trail for nearly two years without once ever discussing a policy detail. It’s also not surprising that the man who told us Uranium is nuclear has a fleeting attention span.

The book tells us that Trump doesn’t read or even skim, and his staff has to develop ways to present him information and to keep his attention. But we already knew Trump is semi-literate. Sure, the guy can read somewhat, but reading at a third-grade level is probably a detriment when you’re the president of the United States. Real creativity will be explaining the nuclear triad in a Curious George book. Did they even lose him during the “I’m just a bill” cartoon?

We didn’t know Ivanka made fun of her father’s ridiculous comb-over or the specifics she gave on the construction and scalp surgery, but nobody has ever been fooled that his hair is ridiculous and covering something up.

Speaking of Ivanka, who thought you filed your 2018 taxes in 2018, is really out of her depth and unqualified, along with Jared, for a job in the White House?

We already knew the White House is in chaos. What the book provides are details on the chaos. And, we already knew this was an unprepared administration whose only agenda is really Trumpism.

Nation first? Patriotism first? Republican Party first? Family first? No, no, no and no. The only agenda for Donald Trump is the promotion of Donald Trump. The presidency is just another division of Trump Enterprises, except this one has the inconvenience of requiring actual work and professionalism, which no one has executed yet.

Trumpism is about feeding Trump’s ego, making him believe he’s the most liked person on the planet and using the government to make money for Trump and to serve his interests, like keeping him out of prison.

Of course, all the Trump people are trying to destroy the book and author’s credibility. It’s hard to say this is just the product of a creative imagination as there’s nothing creative about the insults. “Idiot” is used by nearly every staffer. They’re desperately in need for some Scottish creativity with their insults. There’s not even one “cocksplat” in here.

They say the book is tabloid fodder. They deny quotes or claim they’re out of context or inaccurate. But nobody has validated the overall theme of the book that Trump is a moron more than Trump himself.

Trump’s tweet that he never granted access to the author, Michael Wolff, is the perfect illustration of the president’s stupidity. He never approved of Wolff’s access but failed to notice the guy with a blue White House pass sitting on the couch outside his office for over year. While Trump World believed Wolff was writing a pro-Trump book, the man who claims he’s the best negotiator and will not be taken advantage of by Kim Jong Un, Xi Jinping, or Vladimir Putin, got played by a “tabloid” author.

This is the first presidential administration in American history that had to send surrogates out to tell us the president isn’t stupid, insane, incompetent, and that he can read.

Like I said, knowing Donald Trump is a moron and is incompetent for the job isn’t a revelation to anyone. Of course his critics have known it but so does his staff, his family, his supporters in Congress, your dog, and yes, even the sycophants. The larger issue here is why do so many continue to support him?

Donald Trump has violated and continues every principle of a decent human being. The best quote in Fire and Fury is, “Trump is less a person than a collection of terrible traits.” We can pretend you had the best intentions and honestly wanted to make American great again when you voted for the guy trashing veterans, Gold Star families, women, minorities, and the handicapped. But, wasn’t your belief in the guy squandered on day one when he sent Sean Spicer out to lie to the American public? And if it wasn’t, then why not when he and defended Nazis and endorsed pedophiles?

The only way your principles are not compromised in supporting Donald Trump is if you are a Nazi or a pedophile.

Every Republican in Congress ignoring the election hacking by Russia, and running interference for Trump should go down with him when he’s finally charged with obstruction of justice. What have these people sold their dignity for? Trumpism?

You can be a conservative without supporting Donald Trump unless you believe your politics can’t work without the star power of a racist narcissist with shit for brains.

Trump being an idiot, moron, or a fucking fool is not a revelation. What’s truly a surprise is how stupid you are.