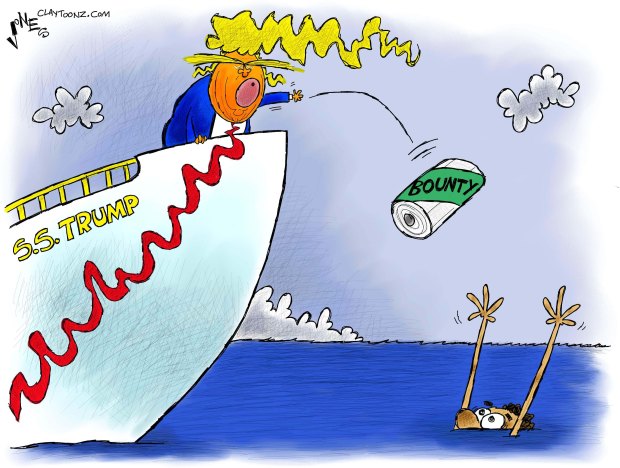 Donald Trump has thrown more paper towels than any other president before him. Not even Roosevelt threw paper towels as tremendous and absorbent as the ones Trump threw.

Bill Clinton would go to the site of a tragedy and hug victims. George W. Bush climbed on top of a pile of rubble where dead bodies were still being searched for and declared, “we heard from those responsible and soon they’ll hear from us.” Barack Obama went to the African-American church where a racist shot up the congregation and sang “Amazing Grace.”

Donald Trump goes to Puerto Rico and throws rolls of paper towels to the victims. He berated them, saying “I hate to tell you, Puerto Rico, but you threw our budget a little out of whack” (ignoring his huge tax cut for the rich, his increased military spending, and his plans to spend billions on a useless border wall). He gets into a tiff with the mayor of San Juan (because he really doesn’t like being questioned by a woman, especially if she’s a minority woman). He accused Puerto Ricans of not helping themselves and wanting everything done for them. He informs the victims that they didn’t have a real catastrophe, like Katrina (because worse disasters happen to other presidents?). He told officials they should be “proud” of a death toll that stood in double digits instead of thousands. He spends the bulk of his four-hour visit telling everyone how much he’s being complimented.

Who could have foreseen that a TV reality show host would be terrible at dealing with a national disaster that turned life upside-down for over three million Americans? How do you deal with Trump’s failures with disaster relief (and life in general) if you’re a Trump sycophant? Oh yeah…those paper-towel throws. Woo-hoo! Over here, Cheeto McGrabberson. I’m open!

Folks in Puerto Rico may not have electricity, food, water, phone service, cash, fuel, etc…but if they spill something, they’re all set.

Trump did not prepare for the hurricane. Supplies were not stockpiled before the storm hit. Supplies, boats, and people weren’t organized to respond until after. There has been a lack of coordination. Last Thursday, over 10,000 shipping containers that had been delivered were still in port.

Yes. As Donald Trump has informed us, Puerto Rico is an island surrounded by water, big water, ocean water. Yet, this is a nation that conducted the invasion of Normandy, Iwo Jima, Okinawa, and is threatening to destroy North Korea, all locations across oceans and “big water.”

It’s not that Trump is un-presidential and embarrassing. He’s a disaster whose job is to deal with disasters. He did not want to become president because he had a broad vision for this nation. He became president to promote his brand and feed his ego. Unfortunately, 62 million Americans fell for the con. Trump needs to quit and let the adults take over now. Americans are dying from natural disasters and from mass shootings, meanwhile, he’s throwing paper towels.

Insiders say that Trump didn’t pay attention to Puerto Rico for a week because he lost interest. It probably took the criticism of a minority woman on the island to gauge his interest, because Trump loves a fight…especially with a woman.

Throwing paper towels is Trump’s way of being consoler-in-chief. It beats having to hug the great unwashed masses in times of their peril. They may have germs.