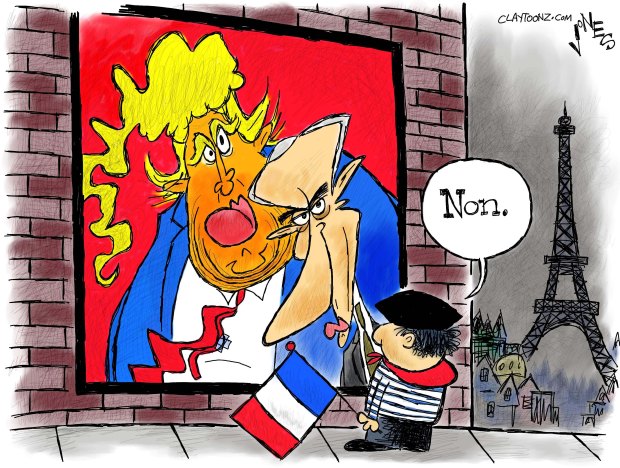 Putin was up to his old tricks by having his cyber-hacking minions infiltrate Macron’s campaign like he did in Britain for the Brexit vote, the U.S. campaign to elect Donald Trump, and several campaigns throughout Europe. The hackers released to the internet emails and information along with some fabricated communications from the Macron campaign a few hours before France’s mandated campaign blackout.

French law shuts down campaigning and media coverage 48 hours before the presidential election. However, the leaked information from the Macron campaign was still online. The questions were: Would French voters be persuaded by the leaks like voters in the U.S.? Would it hurt the Macron campaign that they couldn’t dish out information to counter the attack? Or would it hurt the hacking campaign if voters didn’t have enough time to be made aware of the publishing? Stupid people and alt-right sites were still posting bullshit on Facebook, right?

With Macron winning by over 30%, it probably wouldn’t have mattered how much time the hackers had to publish their espionage. French voters, unlike their American counterparts, are apparently wise enough to know that whoever Russia and Putin support, then you need to support the other candidate. Especially if that candidate accepted loans from Putin, as Le Pen did. While France rejected the xenophobe candidate, Americans rated Trump more honest than Hillary Clinton and ushered him into office despite him not having any governing experience and running on a platform totally devoid of details, but full of racist comments, sexism, and chock-full of stupidity. You would think a platform of “building a wall and Mexico will pay for it”, and “we’ll replace Obamacare with something better. Trust me.” would send a guy back to his golden tower in Manhattan, or at least to one of his golf resorts, depending on the weather. Let’s not forget his “secret plan” to defeat ISIS.

With Le Pen’s defeat, France has saved themselves all the trouble of investigating her campaign for treason, coordinating with their nation’s enemies, and eventually kicking her out of office.

Perhaps Macron’s greatest asset, and Le Pen’s biggest weakness was Donald Trump. France looked across the Atlantic and saw the chaos unfolding across the United States and decided they didn’t want any part of it. They rejected the politics of our Cheeto-Potentate like it was a great big plate of American cheese, Armour Vienna sausages, and saltine crackers.

In a sane world, a big, orange, illiterate, vagina-grabbing, Mexican-hating, narcissistic orangutan with a ridiculous comb-over who is a pathological liar with an inability to comprehend facts isn’t the perfect mascot for an electoral victory. Who coulda thunk that? Unfortunately for us, the United States is not a sober society anymore.

Viva la France. Viva Democracy. France’s gift to us in 1886 sits on an island off Manhattan and is a beacon of freedom and liberty for the entire world. Perhaps their rejection of fascism on Sunday can be another gift. A gift of inspiration for us to reject the politics of intolerance and hatred for the next four years.