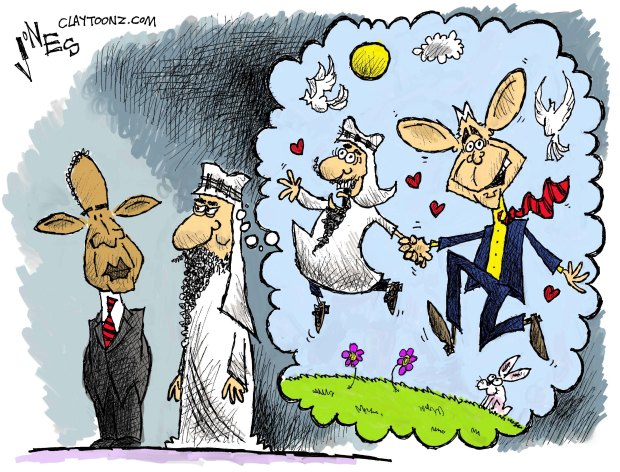 The Saudi kingdom is not very happy with President Obama or the United States right now. In the past, the Saudi king literally held hands with president Bush. They wouldn’t even meet Obama at the airport.

The Saudis are unhappy with issues ranging from the conflict in Yemen, the role of Iran, Lebanon’s instability, the fight against ISIS, and falling gas prices. The most contentious of issues is a Saudi threat to dump U.S. assets if Obama signs into law a bill that could make the kingdom liable for damages stemming from the September 11 terror attacks.

The Saudis also believe we are devoting more attention to their rival, Iran, and Obama has described the Saudis as “so-called allies” and has complained their policies fuel anti-U.S. terror and regional chaos.

Obama should describe the situation as it actually exists. We always talk about freedom while we support a nation that isn’t even remotely free for the majority of its citizens. Saudi Arabia should put troops on the ground to fight ISIS before we make any sort of commitment and while they’re at it, take the anti-American curriculum out of its education system. Maybe in the future terrorists will have a harder time recruiting hijackers from Saudi Arabia than they did in 2001.

A grown man holding another grown man’s hand in public is a sign of friendship and respect in the Middle East. That’s fine, and I haven’t asked, but I doubt my best friend wants to do that with me. I’m not against grown men holding hands but right now. I’m just not ready for another image of my president holding hands with a freedom-hating monarch.

I do miss drawing George W. Bush and that’s the only thing I miss about him.