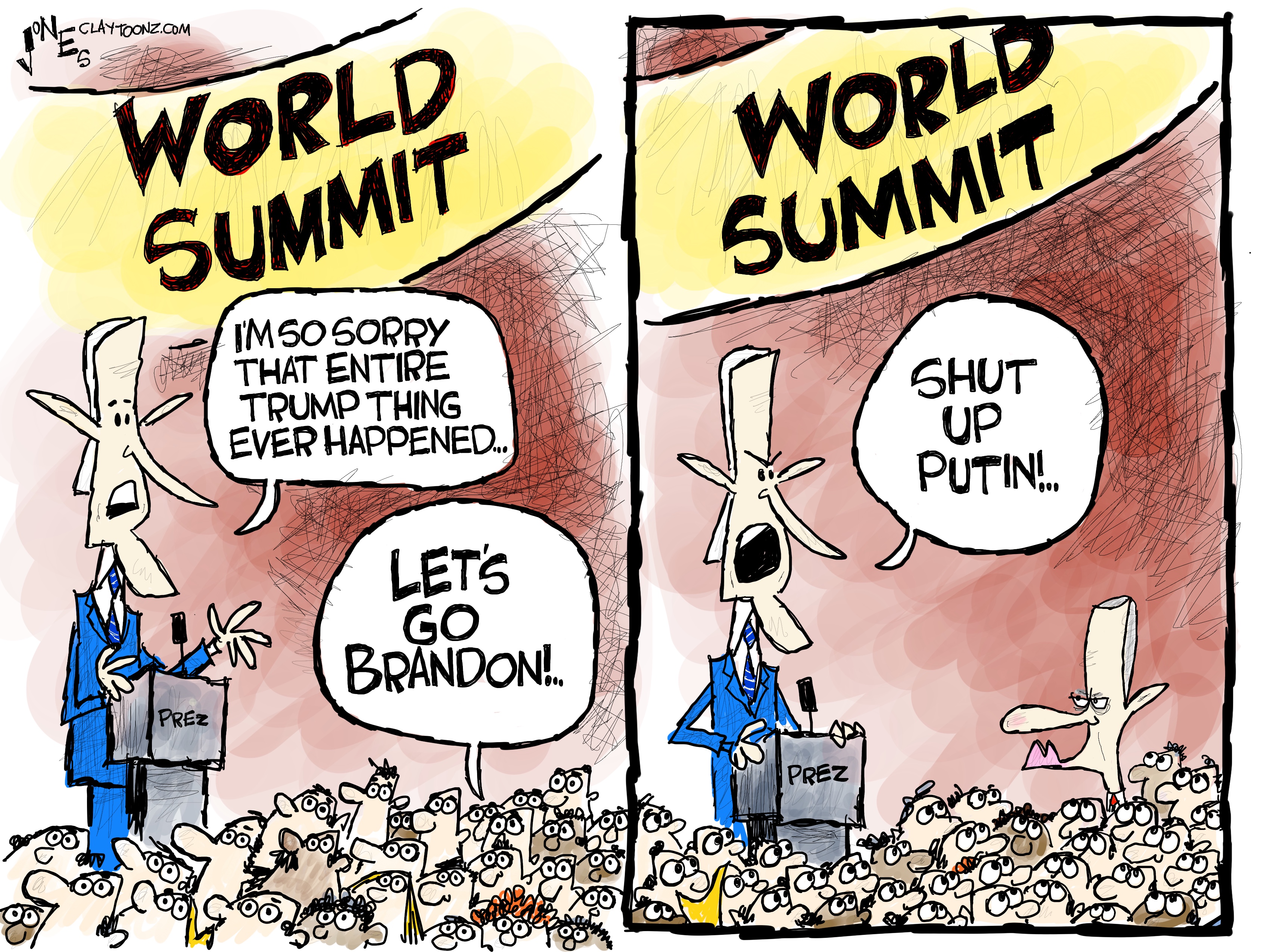 Let’s start the day with honesty. A lot of stuff we said about Donald Trump, myself included, wasn’t very mature. In fact, we were kinda juvenile with it.

However, juvenile they may be, they’re funny, clever, and a hell of a lot better than “Let’s go Brandon.”

Where did this Brandon shit come from? A NASCAR driver named Brandon won a race and the crowd started chanting, “Fuck Joe Biden.” Why? I don’t know, it’s NASCAR. These are people who sit on top of beer coolers in the sun for five hours in Alabama watching cars drive around in a circle and crash into each other. A redneck winning the race made them want to say, “fuck Joe Biden.” I don’t know why. But, a reporter interviewing the Brandon guy misinterpreted, or tried to cover it for the censors, that the chant was “Let’s go Brandon.” Also, after Brandon won a race, “Let’s go, Brandon” makes more sense at the moment than “Fuck Joe Biden.”

But for the past month or so, conservatives have been tee-heeing to each other that they just dissed the president without liberals knowing. Hee hee hee. Aren’t they clever? They’re owning the libs without the libs knowing what they’re talking about. Good job, conservatives. Hey, your shoes are untied. Made you look! Ha. Ha.

The difference between liberals and conservatives is that when liberals engage in juvenile insults, the insults are usually clever. Also, liberals don’t have to engage in code to insult someone. We don’t say, “Red hen spins a wheel at midnight” when we really mean, “Fuck Trump.” Usually, when we want to express the sentiment that we really don’t like Donald Trump, we say “Fuck Trump.” I’m not going to wink, nod, and nudge-nudge it. I’m going to say, “Fuck Trump.”

Also, our elected leaders should be above this kind of shit, but they’re not. One congressman said, “Let’s go Brandon” on the floor of the House. Ted Cruz said it at an Astros game after being goaded by a fan. Usually, when Ted Cruz says, “Let’s go,” it’s not about Brandon but more like, “Let’s go to Cancun.”

Let me give you another example of how this works: Fuck you, Ted Cruz. Did you misunderstand me? No, you did not because I wasn’t speaking in some stupid code. But just in case you did misunderstand me, “Fuck Ted Cruz.”

Also, how do people who identify as Christians explain their use of this? Take right-wing cartoonist Gary Varvel for example. Granted, he has a history of drawing some racist cartoons and is stupid enough to blame tornadoes on gay marriages, but how does he explain, as a Christian, using “Let’s go Brandon?” How do Christians explain, not just the vulgarity, but the hatefulness of “fuck Joe Biden?” I believe Mr. Varvel teaches a Sunday school class. I challenge Gary Varvel to explain to his class what “Let’s Go Brandon” means and then explain how it’s not hateful toward the president of the United States of America. Gary, I challenge you to explain to your students how you’re not a hypocrite and that Jesus approves of what you’re saying. Did Jesus ever say, “Fuck Pontius Palate?”

You are more justified to insult someone for trying to destroy democracy than because they defeated your cult leader.

When we insulted Donald Trump with juvenile nicknames, we were insulting a juvenile who also engages in name-calling, though his name-calling is about as clever as, “Let’s go Brandon.”

Conservatives, you think you’re funny and clever, but you’re not. On top of that, you’re cowards. If you want to say, “Fuck Joe Biden,” then say, “Fuck Joe Biden.” And guess what. We don’t care. I’m not going to lose sleep because a bunch of white nationalists has hairs up their racist asses. We understand you can’t get over the fact Biden defeated your cult leader in a democratic election. Wah. Get over it.

I’m a liberal. We’re not cowards with this kind of stuff. When I say, “Fuck Trump,” I want you to know I said, “Fuck Trump.”

And for that matter, fuck Putin too.

Notes on my book, Tales From The Trumpster Fire: There are ZERO copies of my book in stock, which go for $45.00 each, signed. A new shipment will arrive in early November. Also, I have copies of my first book from 1997, Knee-Deep in Mississippi available for $20.00.