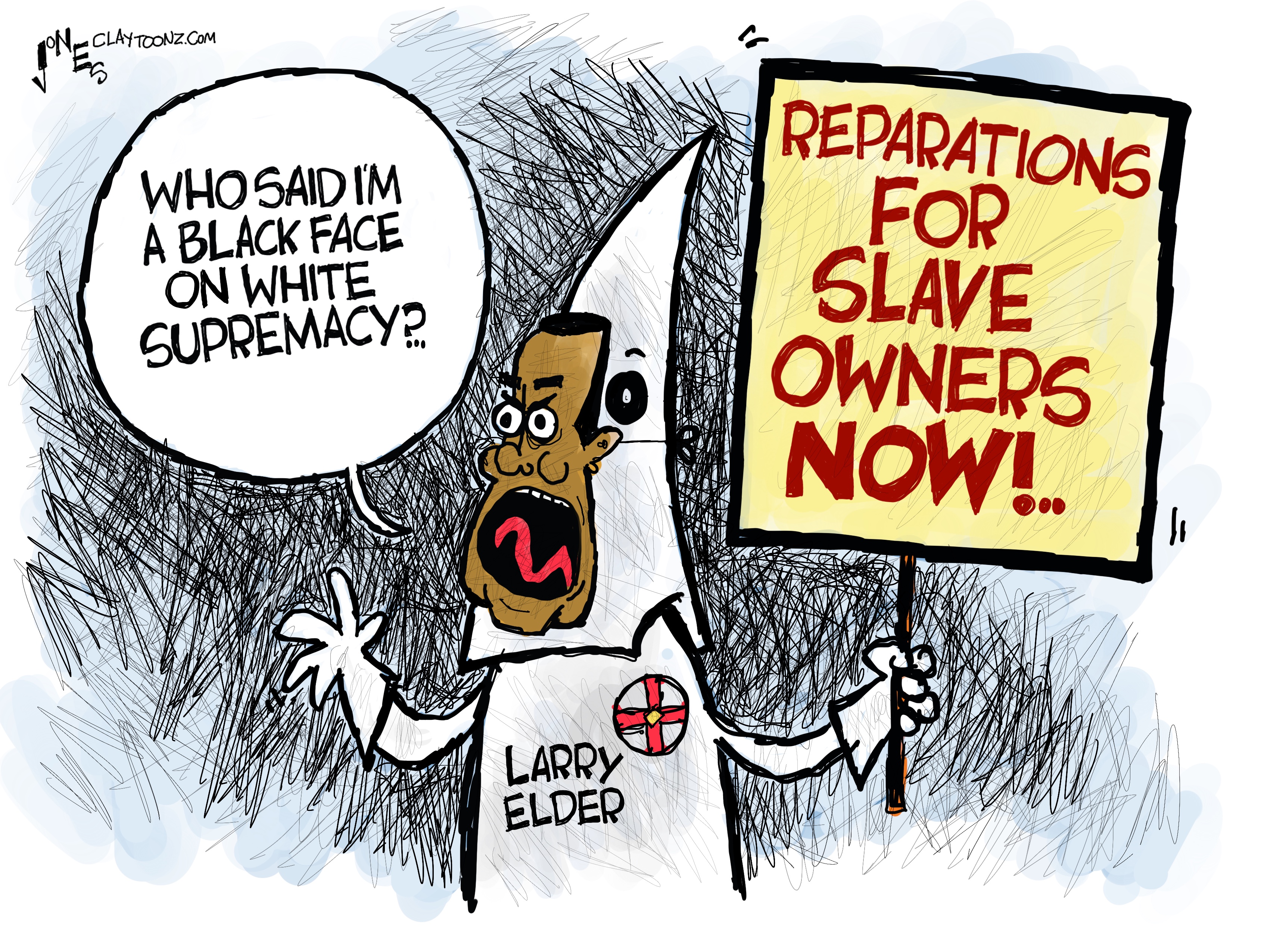 Over the weekend, a speaker at a rally for California governor Gavin Newsome said his Republican opponent, Larry Elder, is a “black face on white supremacy.” Larry Elder is a controversial right-wing Trump-supporting conspiracy-spreading whack job with a radio show who also happens to be black. But black people can be conservative lunatics too, right? Is it fair to accuse one of them, like Larry Elder, of being a “black face on white supremacy?” After all, Larry Elder is totally 100 percent in favor of reparations for slavery.

Of course, it’s not descendants of slaves Larry wants reparations for. No, Larry believe slave OWNERS should be rewarded reparations.

Ya’ see, Larry was talking to fellow black conservative lunatic, Candace Owens (which helps defend him from the charges of racism because she can be his prop for a black friend), and he argued since slavery was legal, slave owners were robbed when slavery ended. He also argued the United States was the first country to end slavery, which is wildly untrue. We were one of the last to end slavery.

But here’s the thing, Larry: Even though slavery was legal, it was a human rights violation. You argue that white slave owners lost property with human beings being that property. Larry, you’re being a good Republican because you are putting monetary value over human lives.

There is one thing that transcends race and that is, it doesn’t matter if you’re black or white. Being a Republican today makes you a fucking heartless idiotic lunatic.

Larry’s ex-fiancée claims he “demanded” she get a tattoo on her body saying, “Larry’s girl,” and during an argument (probably over the “Larry’s girl” thing), pulled out a gun. Larry also says he’s been accused of sexual harassment twice, but he used the Donald Trump defense and said one of them wasn’t attractive enough for him to sexually harass. He said, “If you had seen her, you would know that the picture would be a complete defense. I’m just saying.” If that’s an argument than can we argue ugly stupid men like Donald Trump and Larry Elder are never innocent of sexual harassment? Larry literally has a face for radio.

Larry wants to be governor of California and maybe he’s trying to lose in that blue state. He says if he becomes governor that he’ll replace Senator Dianne Feinstein with a Republican. That right there tells you not to vote for Larry Elder. But, he’s given you a lot of other reasons not to vote for him. Let’s list a few.

Larry wants to end welfare completely. He claims systemic racism isn’t a thing and Black Lives Matter is responsible for rising crime. Why doesn’t this guy have a show on Fox News?

If he’s elected, Larry will remove all covid precautions in the state, including for state employees. That means no vaccine requirements, no mask mandates, no social distancing, and no testing.

Larry thinks Climate Change is a myth and so are the dangers of second-hand smoke. Larry wants to ban all abortions in California. He thinks cops should be allowed to use chokeholds.

Larry wants to get rid of the minimum wage entirely and says there is no gender-pay gap. He doesn’t believe there is workplace discrimination against women but there should be. If a woman plans to have children, Larry thinks her employer should be allowed to discriminate against her.

Larry has a hard time with women. He said, “Women know less than men about political issues, economics, and current events.” Displaying that famous Republican humor, Larry said “PMS” stands for “punish my spouse.” He probably thinks it’s punishment if his spouse won’t get a tattoo of “Larry’s girl.” He said all the women who participated in the 2017 Women’s March were “obese.”

Larry wants to abolish the IRS and the corporate tax rate. He believes we should get reduce government by 80 percent and that the federal government takes 50 percent of everyone’s income through mandates.

Larry Elder is bad news for California. This guy shouldn’t even have a platform on syndicated radio less enough a shot at the governorship. A lot of whack jobs are running in the recall election, but this one might actually have a chance.

If you’re in California, vote “NO” on the recall. Reject the recall…and reject the black face on white supremacy. Personally, I think Larry should get a tattoo saying, “KKK’s Bitch.”